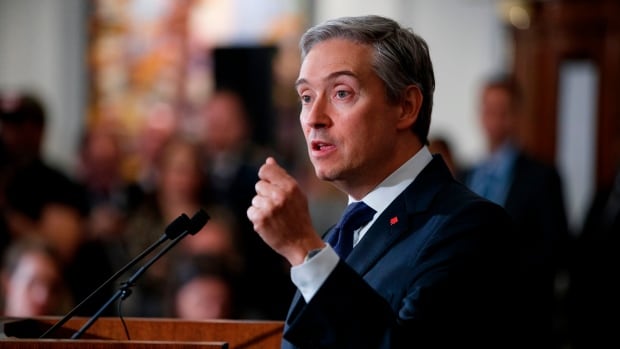 Foreign Minister Franకోois-Philippe Champagne told his Turkish counterpart today that Ankara should “stay away” from the Nagorno-Karabakh dispute between Armenia and Azerbaijan.

Speaking to reporters on Friday ahead of a week-long European tour to discuss the ongoing bloodshed in Nagorno-Karabakh and tensions between Greece and Turkey in the eastern Mediterranean, Champagne said he had a “tough conversation” with Turkish Foreign Minister Mevlut. Causoglu.

“The message is that outside parties should stay away because it is already a very critical situation,” Champagne said.

“We have described the loss of life and made sure that no one is fueling the conflict. On the contrary, the international community must be united in calling the parties back to the negotiating table.” [to] Respect the ceasefire and protect civilians. “

The latest fighting between Azerbaijani and Armenian forces began on September 27 and marks the largest intensification of decades of conflict on the Nagorno-Karabakh. The area is in Azerbaijan, but has been under the control of Armenian-backed ethnic Armenian forces since the 1994 Russian-backed ceasefire.

Armenia says it is ready to maintain a ceasefire. Azerbaijan has made it a potential condition for the withdrawal of Armenian troops from Nagorno-Karabakh, arguing that the failure of international efforts to negotiate a solution has left it with no other option and will seek to reclaim its land by force.

Champagne said he had asked his Turkish counterpart to use his influence to persuade Azerbaijan to return to the negotiating table without any preconditions.

“There is no military solution to this conflict,” Champagne said.

However, in a televised address to the nation on Friday, Azerbaijani President Ilham Aliyev dismissed such statements, saying that almost three decades of international negotiations had “not given an inch of progress, not even an inch of occupied land had been returned to us.”

“Some international mediators and leaders have stated that there is no military solution to this conflict,” Aliyev said. “I disagree with the thesis, I said. The conflict is now resolved by military means and political means will come later.”

Champagne says any suggestion that energy is the best way to resolve a conflict is “discouraging”.

“We call on the parties to respect the ceasefire, to protect civilians and to end hostilities,” Champagne said. “Conflicts are resolved around the negotiating table rather than on the battlefield.”

Last week, in response to allegations that the Azerbaijani military was using it against Armenian forces in Nagorno-Karabakh, Champagne stopped exporting advanced Canadian drone technology to Turkey.

Turkey has condemned the transfer of arms or military personnel or jihadist mercenaries to Azerbaijan, although the Kausogs have pledged to remain on the “battlefield and negotiating table” towards Azerbaijan.

The disarmament group Project Posers argued that Canadian exports of drone technology to Turkey would violate not only Canadian law, but also its international commitments under the UN arms trade agreement.

“We will continue a very comprehensive investigation as Canada is one of the strongest export regimes in the world,” Champagne said. “And I want to honor not only the letter of the law but also the spirit.”

Champagne said he would travel to Greece, Austria, Belgium and Lithuania for a series of meetings with the political leadership of these countries as well as with EU and NATO officials.

Champagne said the first stop on his trip to Europe would be Greece, where he would meet with Prime Minister Kyriakos Mitsotakis and Foreign Minister Nicos Dendias.

“This is going to be a very important bilateral visit,” Champagne said. “I was told the last one happened 20 years ago.”

He said the two sides would discuss the dispute between Turkey and Greece over maritime rights in the eastern Mediterranean.

“Canada has been engaged from the beginning, especially engaging with other partners through NATO. We will try to see how we can uplift,” Champagne said.

It left for Vienna for a series of meetings with the Organization for Security and Co-operation (OSCE) in Europe, headquartered in the Austrian capital.

Champagne said the OSCE would play an important role in the search for a negotiated solution to the Nagorno-Karabakh conflict for decades through its Minsk Group mechanism.

In Vienna, Champagne also meets his Austrian counterpart Alexander Schalenberg. Then, Canada’s top diplomat will travel to Brussels for a series of meetings with NATO Secretary General Jens Stoltenberg.

Champagne said talks with Stoltenberg would focus on security conditions in Europe and around the world.

While in Brussels, Champagne will meet with Joseph Borel, High Representative for EU Foreign Affairs and Security Policy.

Champagne plans to meet with Belgian Deputy Prime Minister Sophie Wilms before heading to the Lithuanian capital Vilnius, where he will hold a “mini-summit” with his colleagues from Lithuania, Latvia and Estonia.

While in Vilnius, Minister Champagne will also meet with Belarusian Leader of the Opposition Svetlana Tikhanovskaya, who fled to Lithuania after the August 9 presidential election in Belarus and the violent repression of President Alexander Lukashenko, who won a solid victory in the elections.

Canada has refused to recognize Lukashenko’s victory and his inauguration, and Canada has imposed sanctions on him, his eldest son and 12 other Belarusian officials.

Champagne leaves Europe on Sunday and returns to Canada on Saturday.