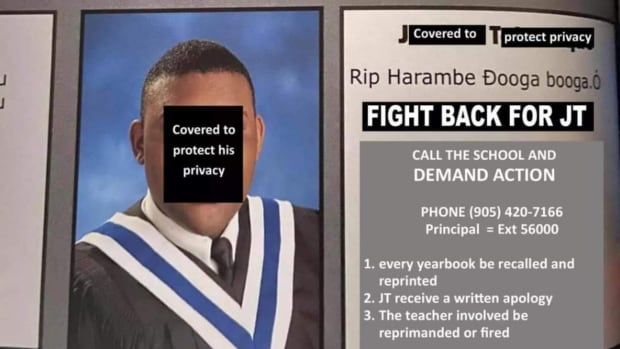 A Pickering, Ont., Asked all high school students to return their yearbooks, with the principal calling out a “malicious, hurtful and racist” message in place of a black student tribute.

The student, a senior at St. Mary’s Catholic Secondary School, made the entry to pay tribute to her late grandmother in an aunt’s Raphael Facebook post.

The boy’s yearbook entry read: “RIP Grandma. Thank you for guiding me through my four years of high school.”

Instead, it was replaced by: “Rip Harambe dooga booga.o” – somewhat referring to the gorilla killed in Cincinnati, Ohio in 2016.

Raphael shared a picture of the Yearbook on Facebook, blocking the identification of her nephew for privacy reasons. What he did was “destruction, trouble, suffering and despair,” she said.

“He’s really looking forward to his yearbook,” she read in the post. “Now the memory of the time he spent in school is forever damaged.”

Simon Parsad, a Grade 12 student at St. Mary’s, said he could not believe something similar had happened to this student.

“That guy is a really good guy,” Persad said. “He’s always been really kind and everything, so I do not know why anyone would target him directly.”

The high school senior was described by his peers as a star athlete, playing on football, basketball and track and field teams.

“He has received many awards for his athletic abilities and it is unfortunate that this is happening.”

In a letter to students and staff, St. Mary’s Principal Susan Duan said the school was “terrified to learn that inappropriate comments were being published unknowingly”.

“These comments are malicious, hurtful and racist in nature,” the letter read.

“We sincerely apologize to the school community for the offensive, hurtful and unacceptable nature of these comments.”

The school has launched an investigation with the Durham Regional Police Service “to make sure all responsible people are held accountable.

Raphael said she believes a group of students and at least one teacher was responsible for maintaining the Yearbook.

“Those who produce offensive or disrespectful content are subject to disciplinary action,” Duane said.

For the graduating class this year, the school year was already mired in sanctions due to the COVID-19 pandemic.

“We have no graduation, no prom,” McClimont said.

She said the yearbook was “the only thing we have and it has been destroyed. It’s so terrible.”

Students are instructed to return their yearbooks to school by Tuesday and a complete list will be completed to ensure that each copy is counted.

Meanwhile, news of what happened has already been strongly condemned, including NDP MP Ontario politician Laura May Lindo for the Container Center.

She tweeted that the incident in Pickering “literally brought me to tears” and that the call for anti-racist education “comes out loud every day”.

The call for anti-racist education comes out loud & amp; Every day …

It literally brought me to tears.

While an apology is needed, it is another sign that something terribly wrong has happened in Ontario schools. Terrible mistake. https://t.co/tAal6Y5JlG

Racism continues to be a challenge in the Ontario school system. Here is more coverage of the issue: