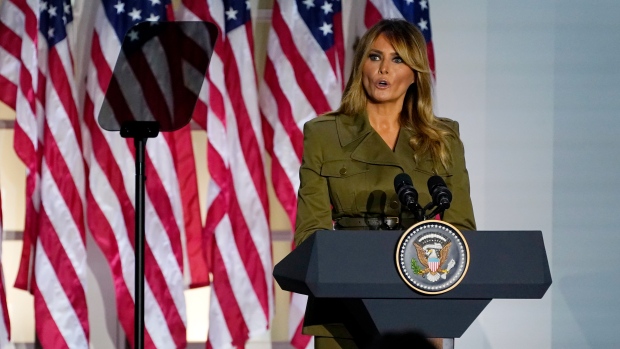 WASHINGTON – The campaign trail will have to wait for Melania Trump to return.

Her chief of staff, Stephanie Grisham, said she had made the first lady decision with US President Donald Trump on Tuesday at a campaign rally in Erie, Pennsylvania, as she had a chronic cough after battling COVID-19.

Ms. Trump’s first public appearance since recovering from a coronavirus, as well as her first in more than a year on the campaign trail.

The First Lady’s statement served as another reminder to the President that the virus would “disappear” as long as he wished – as he puts it – with a powerful presence in everyday life, including with him.

Trump said Monday that people are tired of hearing about COVID-19. More than 58,000 Americans are tested positive for the virus every day and more than 700 are infected every day.

Ms Trump continues to feel better every day “but with a chronic cough, and with great care, she will not travel today,” Grisham said.

The First Lady was last seen in public during a September 29 debate in Cleveland between Trump and Democrat Joe Biden. She and the president tested positive two days later.

First Lady announced in a blog post last week that she had recovered from Kovid-19 with headaches, body aches and fatigue and tested for allergies. The couple’s 14 – year – old son Baron was also infected with the virus, but she never showed any symptoms, she said. Since then he has tested negative.

President Trump has been receiving treatment for his illness at a military hospital outside Washington for three nights. He was released on October 5 and returned to active campaigning last week.

Tuesday’s rally in Pennsylvania appeared for the first time since Ms Trump briefly spoke at an event in June 2019 in Orlando, Florida.

She addressed the Virtual Republican National Convention from the White House Rose Garden in August.

The First Lady planned to headline a Trump campaign fundraiser in March, but those shows were canceled due to the spread of the coronavirus.

She will travel to Nashville, Tennessee, with the president on Thursday for a second and final discussion with Biden ahead of the November 3 election.