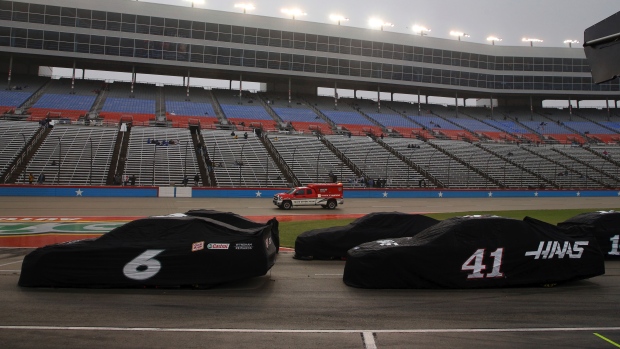 FORTWORT, Texas – The start of the NASCAR Cup playoff race resumption in Texas still stalled on Monday, as more rain and a depressing forecast.

There is no official word from NASCAR on when the race can continue.

Only 52 of the 334 laps were completed Sunday before the fog and drizzle stopped the race. It was delayed by more than four hours to postpone until Monday.

When the morning race had to start again, it continued to rain overnight and temperatures were in the mid-40s.

Cars are still parked in the garage and jet dryer trucks are making slow laps around the 1 1/2-mile track.

Cars continued to run for up to eight laps after the weather warning first came out Sunday, while jet dryers circled the track. Cars sat outside for half an hour on Pit Road before the torpedoes came out and the drivers and crew headed for the cover.

Eric Jones was third, the only driver to reach the last four after winning a week earlier in Kansas than Joey Logano.

Martin Trucks Jr. was fifth, having to start at the back of the field due to an illegal spoiler already. He is ahead of fellow playoff contender Chase Elliott.

Kevin Harwick, who has won the last three fall races in Texas and is a nine-time winner this season, brushed the wall while leading on Lap 29. As his car crashed to the right, he finished 36th and stopped a lap down in the race.

READ  From the great Shapovalov | The Journal of Montreal