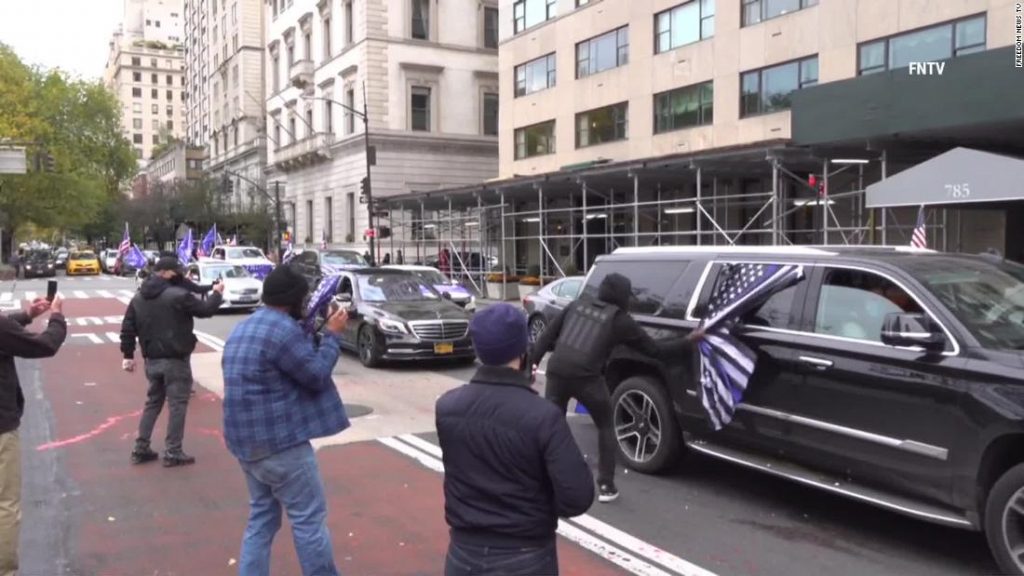 Detective Martin Brown Lee, a spokesman for the New York City Police Department, told CNN that the caravan was traveling on Fifth Avenue in Midtown Manhattan and eventually encountered a group of counterprotectors after arriving at Times Square.

A special law enforcement official told CNN that the caravan was believed to be run by a group called “Trump for the Jews.” Vehicles de Brooklyn departs and enters Manhattan on Sunday, CNN Affiliate WLNY Reported.

When the caravan met a group of counterprotesters in Times Square, some of Trump supporters got out of their cars and beat up other protesters, a law enforcement official said.

CNN commented for Trump for Jews.

A law enforcement official said 12 people had been arrested in connection with the clashes at three premises. The charges included assault, disorderly conduct, reckless endangerment and obstruction of traffic.

Video footage of the clashes showed counterprotectors shouting explosives, tearing down flags and Throwing objects At pro-Trump vehicles.
Footage of an incident near Central Park shows a protester tearing down a flag associated with it. Blue Lives Matter Movement From a vehicle. Protesters chanted “Black Lives Matter” and some stamped the Blue Lives Matter flag.
Blue Lives Matter is a national law enforcement agency and was first set up by their supporters to deal with it Black Lives Matter Movement.
Another The video is shown A group of people holding pro-Trump banners on one side of the street shouted, “New York hates you.” Another clip shows demonstrators throwing projectiles at a pro-Trump caravan while traveling on the Brooklyn-Queens Expressway – this incident NYPD says It is being investigated.
At one point, protesters even shouted at Trump’s personal lawyer and former New York City mayor Rudy Giuliani. He said The New York Times He said he was coming out of a radio show tapping when he encountered a crowd on Fifth Avenue. At the time, the police are trying to include the exchange of protesters walkway.

Clashes broke out between rival groups a week before election day.