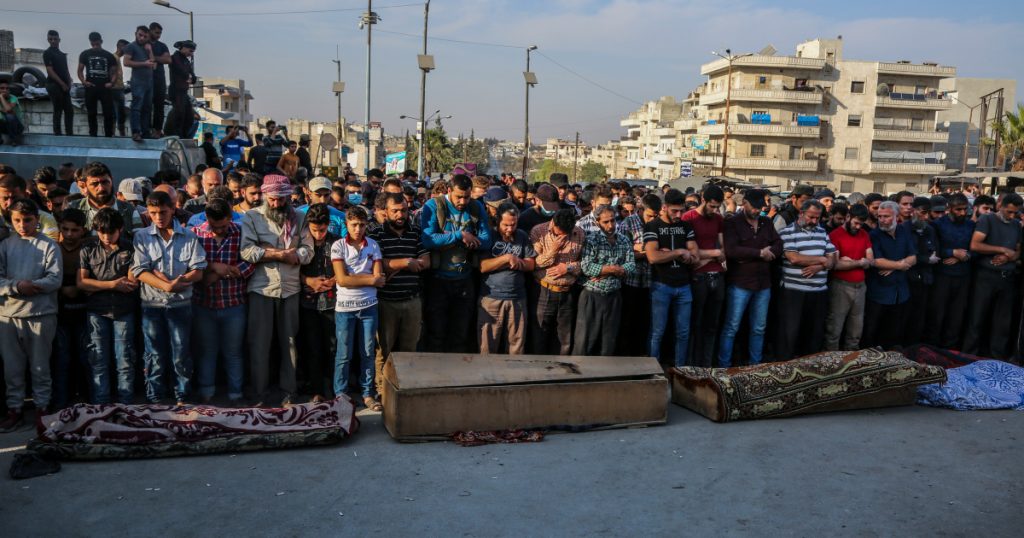 Russia and Turkey are two sides of the same coin. They are both heavily involved in some of the most important ongoing conflicts in the world, including Libya, the Caucasus and Syria.

They support opposition parties in the hope of expanding their military presence and political access to the Middle East and the Mediterranean.

Although both countries are also waging proxy wars, it is very rare that they come out of the head.

Observers say the attack in the Jabal al-Dwila area, which targeted a military training camp for Filak al-Sham, one of the largest Turkish-backed militias in the region, was a “message” to Ankara.

As the closest proxy to Turkey in Idlib province, it was “not a Russian attack on the Syrian opposition, it was a direct blow against Turkey – and a message to Turkey,” Charles Lister, director of the U.S. Middle East Institute, told Al Jazeera.

Lister said that because of the “enormity” of the attack, which killed at least 35 fighters and wounded more than 50, widespread geopolitics could push Russia to strike.

Although a strong ally of Syrian President Bashar al-Assad – and Turkey has been negotiating a ceasefire in Idlib, much has happened since March this year, the latest calm indicates signs of Turkish involvement in various wars.

Most importantly, in the Caucasus, Anjara has declared support for Azerbaijan in its fight against Armenia in the disputed Nagorno-Karabakh region.

Moscow, which has traditionally been close to Armenia, has expressed disappointment over reports that it has sent Syrian mercenaries to fight alongside Azerbaijani forces – opening a new front on the proxy standoff.

In Libya, Turkey reportedly sent tens of thousands of Syrian fighters last year to fight on behalf of a UN-recognized national treaty in Tripoli that is fighting Russian-backed forces.

In Syria, Moscow and Ankara have worked together to maintain a ceasefire in the last rebel enclave in the northwest, despite their support for the opposition during the country’s nine-year conflict.

Earlier this year, they brokered a treaty in Idlib to stop a government offensive that displaced nearly a million people during the worst humanitarian crisis of Syria’s nine-year war.

Of those displaced by the attack, more than 200,000 have returned to their towns and villages since the ceasefire took effect.

The war-torn province of Idlib, home to more than three million people, has been plagued by sporadic bombings in the area from both sides.

Other experts, including Turkish columnist Semih Idiz, agree that the timing of the Russian airstrikes was “significant”, with Ankara “flexing its muscles” in the Middle East and the Caucasus.

“The Armenian-Azeri conflict is a particularly sensitive issue, because Moscow trusts its backyard and sphere of influence,” Idiz told Al Jazeera.

Idiz said other factors, such as Ankara’s inability to address the issue of groups in Idlib, which Moscow considers “radical”, could have led to the strike.

The Turkish-backed National Liberation Front alliance has 11 Free Syrian Army (FSA) factions, all of which have Ankara support. But it excluded the former al-Qaeda affiliate, Hayat Tahrir al-Sham (HTS), which now controls large areas of the province.

When Russia and Turkey signed the first major Idlib agreement in 2017, the main condition set by Moscow was that Ankara must rescind the HTS. Russia has often used the presence of Tahrir al-Sham to attack Idlib.

READ  "Geopolitical maneuvers" delaying the end of the epidemic

But Turkey has not distanced itself from the armed group because it cannot, or does not want to, Idiz said.

Referring to the terms of an agreement reached at an earlier summit by Russian President Vladimir Putin and his Turkish counterpart Recep Tayyip Erdogan, Russia is the way to say “this latest strike is over – or over”. This year.

Darin Khalifa, a senior Syrian analyst at the International Crisis Group, agreed, citing the need to target some rebel groups to justify Moscow’s continued use.

“This kind of calm is in line with Moscow’s policy on the ceasefire that governs Idlib,” Khalifa told Al Jazeera.

“This agreement, like its predecessors, is inherently flawed because Turkey goes after some strong insurgency formations in the region,” she said.

For any ceasefire to continue, Moscow and Ankara must first resolve the “gap between the respective positions”, the caliph said, on how to deal with some of the rebel groups in Idlib, including the HTS.

Russia’s previous raids in the region have been aimed at pushing opposition fighters off the key M4 road in northern Syria, where Turkish and Russian forces are conducting joint patrols as part of a peace deal.

In recent months, however, joint patrols have stopped, causing the intensity to increase.

According to Ediz, patrolling was practically low. They “only give the impression of cooperation between Turkey and Russia”.

“Stopping these patrols is a ceasefire agreement … which is gradually declining, leaving only the military option on the table again,” he said.

Lister said the significant increase at this time was questionable, but it was difficult to pinpoint whether Ankara would “fully allow this slide”.

Meanwhile, Idiz said Turkey should take it out on the forces of Syrian President Bashar al-Assad, who is allied with Russia.

On Tuesday, one day after the attack, Syrian opposition fighters fired hundreds of missiles and artillery shells at government posts in northwestern Syria.

“If one of them hits the target of a sensitive pro-government regime, or if such attacks sustain themselves, we can easily see the tight-for-tat uncontrolled spiral turn back into hostility,” Lister said.

The restored, full-scale attack will be a disaster for the war-weary inhabitants of the province, now the devastating coronavirus crisis and the start of another winter.

Many of the homeless are in already crowded camps near the Turkish border, and have limited access to basic supplies, including clean water.

The caliph warned that as long as Idlib’s future was “on Russian-Turkish regional calculations”, areas in northwestern Syria would continue to be used as “bargaining chips”.