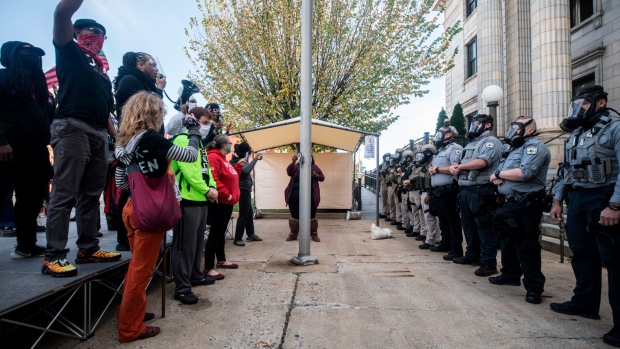 Planet police said they issued several warnings to spectators to leave the road at Alumni County Court before spraying pepper and then arresting eight people.

A press release from the department said traffic was not allowed to stop in March, organized by Reverend Greg Drumright. Drumwright initially asked police and the Alumni County Sheriff’s Office if authorities could block the road for rally members, but that request was never granted because Drumwright “missed the deadline”, planet police said.

Attendees take a break of about nine minutes on the roadway, creating traffic back-ups “in all directions around Court Square”.

Later, police were asked to disperse the crowd, giving them a five-minute warning to get off the road.

Over time, police said, they released the spray toward the ground rather than “directly” towards the participants.

The “I Am Change” march for the election was organized by activist Drumright and began as a parade from the local church to the court.

“We’m bored with this kind of treatment in Alumni County and Graham City,” Drum Wright said after the altercation on a Facebook live video. “Those two legal entities … are together to suppress peaceful managers, not only to vote here, they call for an end to systemic repression and racial inequality.”

Lindsay Ailing, a graduate student and anti-racist activist who attended the rally, said the Associated Press used tear gas indiscriminately and without cause on the audience, including children.

“Police are looking for excuses to use pepper spray and arrest members of the public,” she said.

“All eligible voters in North Carolina have a constitutional right to vote safely and securely without intimidation or threats,” Democrat Stein said.

A federal monument has been a local target for demonstrations outside of Alumni County Court since George Floyd died at the hands of Minneapolis police in May. A black man named Floyd died after a white officer pressed his knee to Floyd’s neck for several minutes.

Drumright said he will hold a press conference at 12:30 pm on Sunday at his Tucker Street apartment in Burlington.