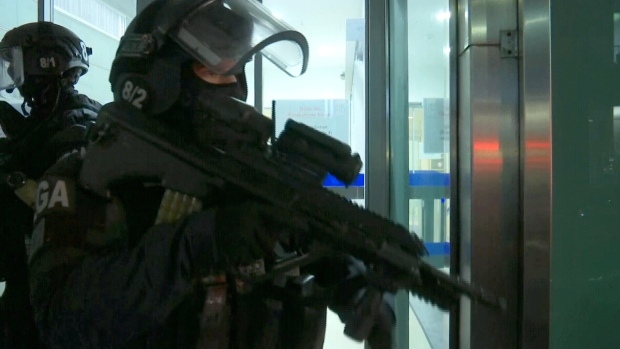 Vienna – At least one person was killed and several others were injured in an attack by multiple gunmen in Vienna. An attacker who security officials call a “terror attack” has been killed.

The Austrian capital police said several shots were fired after 8pm (1900 GMT) on a live street in the city center and that there were six different shooting locations. An Austrian official said several gunmen were involved and that authorities believe the police operation was still ongoing.

“It looks like a terrorist attack,” Interior Minister Carl Nehmer told public broadcaster ORF, adding that the perpetrators were armed with rifles. “I can confirm that many were injured and that there were deaths among them as well.”

Vienna police tweeted: “One dead, many injured (including 1 officer).” They said one suspect was shot and killed by police officers.

The Austrian press agency quoted Ambulance Service spokesman Daniel Melcher as saying many had already been killed and injured, although he could not yet be reached for comment.

Oscar Deutsche, head of the Jewish community in Vienna, said the shooting took place on the street where the city’s main synagogue is located, but it is not clear if the synagogue was targeted. The synagogue was already closed during the shooting, the Deutsche tweeted.

Rabbi Shlomo told the Halfmeister Associated Press that he saw at least one man firing at people sitting outside bars on the street below his window.

“They fired at least 100 rounds outside our building,” Hoffmeister said.

“All these bars have tables outside. This evening is the last evening before the lockdown, ”he added. “By midnight, all the bars and restaurants in Austria will be closed next month and a lot of people will want to get used to going out that evening.”

“After France, it was a friendly country. This is our Europe … we will not give, ”he wrote.

France has endured three attacks in recent weeks blaming Muslim militants: one wounding two people outside the old headquarters of the Pakistani refugee satirical newspaper Charlie Hebdo, killing a schoolteacher who had shown students caricatures of the Prophet of Islam, and a deadly knife attack in the Mediterranean city of Nice last Thursday. France’s counter – terrorism prosecutor has opened an investigation into all three, and France is now on high alert.

Authorities in Vienna have urged people to avoid all public places and public transportation in the city. Social media users were asked not to post videos of the ongoing police operation, saying that trams and buses would not stop and to avoid endangering the officers.

Reported by Frank Jordans from Berlin. Kirsten Grishaber and David Rising contributed to the report from Berlin.