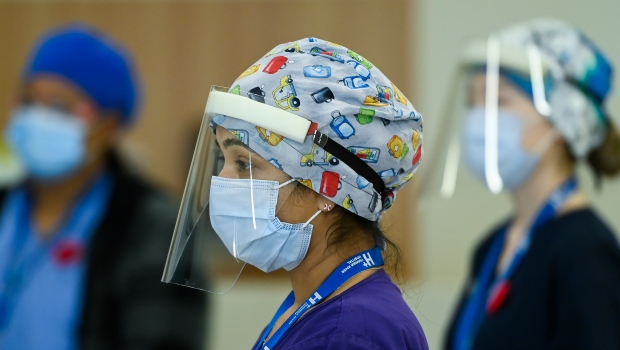 TORONTO – New COVID-19 cases in Ontario have crossed the 1,000 mark for the third time in a week.

Ontario’s seven-day average number of cases is now 996, a new record for the province. While 41,268 tests have been processed in the last 24 hours, Ontario’s COVID-19 positivity rate is currently 2.4 percent.

Another 14 deaths related to COVID-19 occurred the previous day, the health ministry said.

The news comes on the same day as the Ontario government decides Decide where each area in the province will be placed in its new Tired Lockdown system.

The Protocol Comes into effect at 12:01 a.m. Saturday and each of Ontario’s 34 public health units stands as one of five divisions, preventing, protecting, restricting, controlling or locking down, each with their own health measures.

At least 97 new cases were added in those aged 80 years and older.

Where are the new COVID-19 cases?

Those areas, as well as Ottawa (43), are currently observing revised public health measures that prohibit the use of gyms and theaters in restaurants and bars in addition to indoor meals in an effort to curb the spread of COVID-19. .

Earlier this week, the government proposed to keep the Ottawa, Peel Region, York Region and Eastern Ontario Health Units within the limits of the Provincial Lockdown Framework on November 7.

Toronto will not join these four areas until November 14 at the request of Mayor John Tory.

Meanwhile, there are 380 patients in a hospital in Ontario with COVID-19. Of those patients, 86 are being treated in the intensive care unit while 49 are breathing with the help of a ventilator.