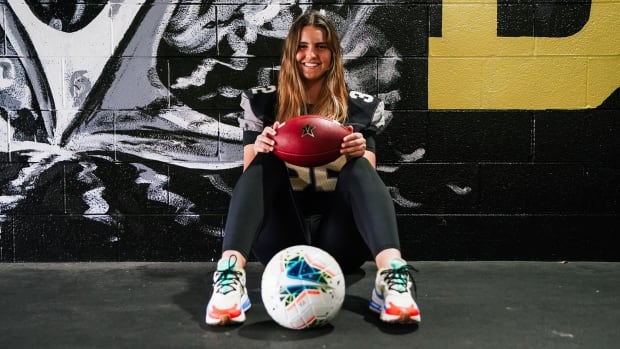 Women’s soccer player Sarah Fuller wears a football uniform for Vanderbilt on Saturday and became the first woman to play in the Power 5 game when the Commodore visited Missouri.

“Let’s make history,” senior Sarah Fuller wrote on Twitter on Friday with a photo of herself holding a football in her hands and wearing a football jersey with a soccer ball between her feet.

No woman was seen at the Southeast Conference football game or on the Power 5 Gridiron team. Liz Heston became the first woman to score two extra points for Willamette in the NAIA on October 18, 1997.

Katie Hnida became the first woman to score at the football bowl subdivision level with two extra points for New Mexico on August 30, 2003. April Goss was second in 2015 with an extra point for Kent State. Tonya Butler First Woman Score a field goal in the NCAA Game for Division II West Alabama on September 13, 2003.

If she kicks, Fuller is the first woman to play in an SEC game and the first women to kick in a game between Power Five schools pic.twitter.com/M9aLZgGec6

Fuller, a senior from Wiley, Texas, made three savings last weekend, beating Vanderbilt top-seeded Arkansas 3-1 in women’s soccer to win the program’s first Southeastern Conference tournament title since 1994. Fuller played every minute of the tournament, an honor Vanderbilt called her for help.

She is wearing “Play Like a Girl” on the back of her helmet.

“I think it’s amazing and unbelievable, but I’m also trying to separate it because I know it’s a job I have to do and I want to help the team and do the best I can,” Fuller said. “Putting that historical point aside helps me focus on what I need to do. I do not want to disappoint them anyway.

COVID-19 protocols and sanctions made coach Derek Mason available against a limited number of experts against Missouri. That’s why he approached soccer coach Darren Ambrose for some help.

When she calls for help, Fuller makes history.