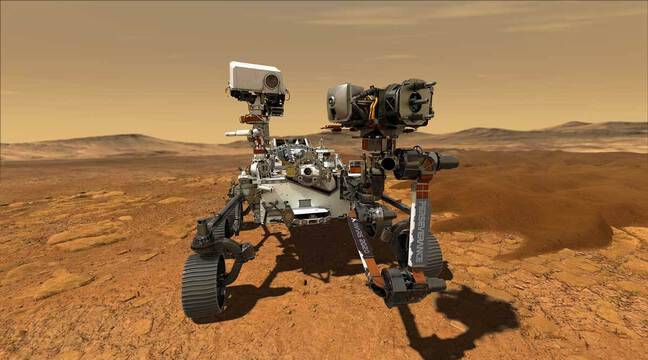 Mars has a new inhabitant, l’astromobile perseverance. Launched in July 2020, the robot landed on the Red Planet on February 18 as part of NASA’s Mars 2020 mission. Thanks to a large number of people live streaming on the web after the plane landed
NASA. A historic moment later led to a sort of treasure hunt.

NASA actually pushed Internet users to search for clues and elements hidden in the video of the device landing. “Sometimes, we leave messages in our work in the hope that others will find them,” one of the NASA experts said during the device’s landing video broadcast. “So we invite all of you to try your luck and submit your proposals to us.” Apparently, astronomy enthusiasts did not take long to watch the video to analyze the small details. It did not take long to find the hidden message.

The rover’s parachute was actually hidden Coded message It made sense in a few hours. The red and white stripes on the parachute canvas hide the word “dare mighty things” in NASA’s unofficial motto, Binary Code. The parachute canvas also hides the geographical coordinates corresponding to the location of NASA’s Jet Propulsion Laboratory.

But it’s not just the perseverance Easter egg. Most observers have identified a “family photo” on the device. Plaque representing 5 NASA rovers on Mars.

Perseverance Rover’s goal is to recover many Soil patterns from Mars And collect them in a specific place so that another device can retrieve them and bring them back to earth for analysis. According to NASA’s agenda, this will not happen until 2031, subject to funding for the mission.