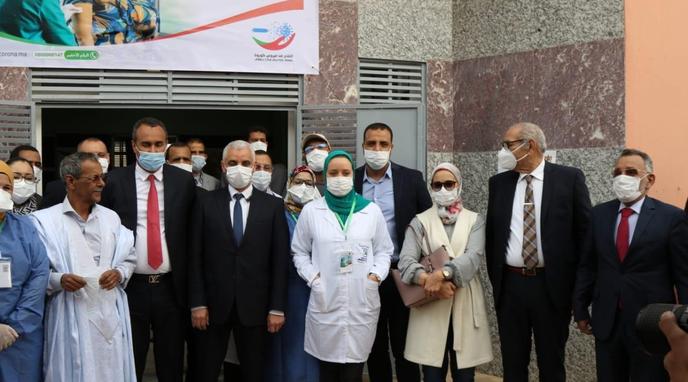 Health Minister Khalid Ait Taleb visited two vaccination stations in Dakhla on Friday as part of the progress of the national vaccination campaign against Kovid-19.

In particular, the Minister of Health, Wali of the Dakhla-ed Eddahab region, the Governor of the Uda Eddahab Province, Lamin Benomer and the Dakhla ed Eddahab Regional Council, El Khattan Anja, at the Hassan II Hospital in Dakhla to inquire about the progress of the vaccine against the new coronavirus. “Assalam” went to the vaccination center in the youth center.

At the same time, explanations were presented to the AIT Taliban on the vaccine campaign and the epidemiological situation at the regional level.

Ait Taleb stressed in a press release that the visit was part of a tour aimed at monitoring the progress of the national vaccination campaign launched by HM King Mohammed VI on January 28.

He said the vaccination operation was going on at a “continuous” pace and welcomed the strong support of the citizens for this operation.

The national vaccination campaign was hailed internationally today as Morocco is in a “very advanced” stage with the aim of achieving the desired goals, as the vaccine is classified among countries that have achieved success in the challenge. As soon as possible.

Similarly, Ait Taleb praised the great mobilization of local authorities and health personnel with the aim of ensuring the good organization of the operation.

During the visit, mobile vaccination units were set up in the Eddahab area of ​​Dakhla, which will be responsible for providing the vaccine to people, patients and the elderly living in remote areas.

The goal of the vaccine campaign is to reach almost 80% of the population, with the goal of reducing and eliminating cases of contamination and deaths due to infection, with the possibility of a gradual return to normal life. .