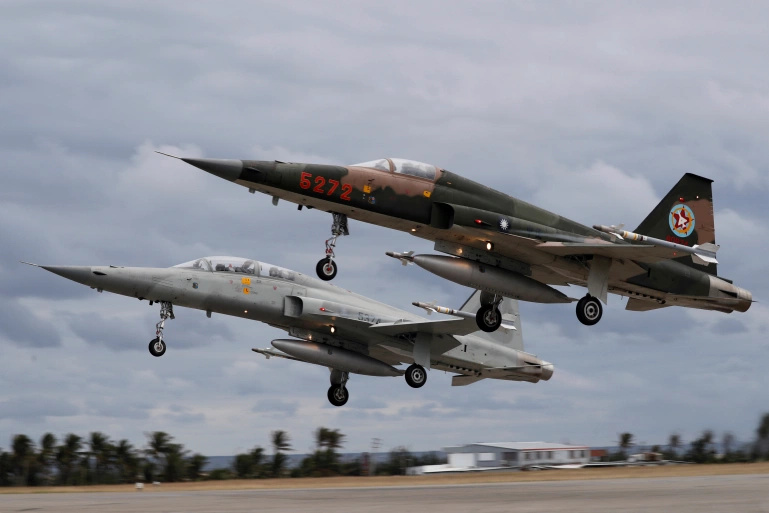 (Taipei) Taiwan has suspended training and exercises for its air force, after the pilot died and another disappeared Monday in an accident between their warplanes.

The Air Force made the announcement after two F-5E planes collided that disappeared from radar screens 2.6 miles off the county coast. Pingtung to the south of the country.

They were part of a group of four F-5s that departed 30 minutes earlier for a routine training mission, and Chief of Staff Huang Chih-wei said the incident happened as they were changing the setting at an altitude of about 14,000 feet (4,200 meters).

Preliminary investigation revealed that the ision was a causal cause and did not involve “mechanical and atmospheric factors”. One of the pilots, who was unconscious at sea, was not recovered and was pronounced dead at the hospital.

This is the third such accident in Taiwan in six months and “the air force has temporarily grounded all its equipment for (security) inspections,” said Huang Chih-wei.

“We have discontinued training and exercises, but ‘combat preparation’ missions are normally carried out,” he said, assuring officers that everything was being done to rescue the missing pilot.

The Taiwan warplane complex is aging and has faced a number of fatal accidents in recent years.

These devices are under extreme pressure, and Taiwan is trying to protect itself from the growing number of incursions by China into its defense territory.

China considers island territory to be one of its provinces and threatens to use force in the event of official independence or external intervention.

Tensions on both sides of the Taiwan Strait have escalated since the 2016 election, with Taiwanese President Tsai Ing-wen, traditionally from the hostile party to Beijing.

These incursions force the territory to respond by regularly maneuvering and training its pilots well for battle.

In October, the pilot died when his F-15 crashed into the sea at east.

A month later, all of its F-16s were shut down during security checks after a plane went missing on a training flight.

In addition to the F16s, there are Taiwanese Homeland Security Fighters (IDF) and Mirage, built by France in the late 1990s, as well as the F5-Es of the 1970s.