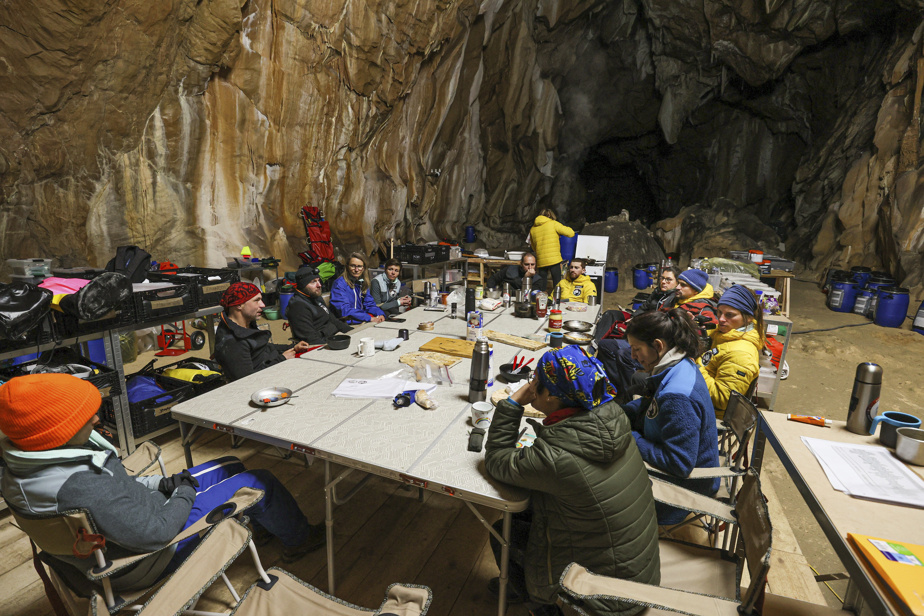 (Tarascon-sur-Ariège) Fifteen members of the Deep Time Mission volunteered for a limited day in a cave in the Pyrenees (southwest) for 40 days during the day and described their experiences, marked by the disinchronization of sleep, but before the “miracle” of this “extraordinary” atmosphere.

Dazzling sunglasses with the sun, the members reconnected with the outside world on a deep time trip, their faces a little pale, but visually in good shape.

Without a watch, telephone or natural light, 15 volunteers, led by Franco-Swiss explorer Christian Clott, had to get accustomed to the Lambrives cave in Ariege at 10.5 degrees and 100% humidity, generating their own electricity by pedal boat and drawing water to a depth of 45 meters.

“Moisture has a huge impact. We have seen over time and with fatigue, the need for food increases,” Mr Clott said.

In particular, they felt that too little time had elapsed when other participants were warned that the 40-day period had expired.

“It was a real shock. I thought there were still five or six days left,” said Emily Kim-fu, a 29-year-old nurse who was part of the team.

During the experiment, participants also observed a great disparity in sleep cycles. So when some got up, others went to bed.

Usually, “I don’t remember my dreams. I had a good surprise. I remember some dreams in the cave, ”said 29-year-old biologist Arnad Burrell.

Confirming that he had just learned that there was a “new confinement” in France, Mr Clott, the founder of the Human Adaptation Institute, also spoke of “falling back into reality”, noting that the lack of a mask in the cave was an “interesting form of freedom”.

Still, according to the Franco-Swiss explorer, the goal is to study our ability to adapt to the loss of deep-time spatio-temporal milestones, which is a question raised especially with the health crisis.

Although researchers have linked it, the approach has been greeted with skepticism by other scientists, who point out that they lack a sufficiently “rigid” framework.

Therefore, the data collected on the brain and the participants’ cognitive abilities collected before entering the cave are compared with those collected at departure, especially to study changes in the nervous system associated with this abnormal environment.

Like other researchers, Pierre-Marie Ledo, director of the “Perception and Memory” unit at the Gene Synopsis and Cognition Laboratory (CNRS) and Institute Pasteur, emphasizes the lack of “group control” that allows results to be compared. People who were locked up with others remained outside, which, according to him, prevented the scientific validation of the results.

“Getting out of the cave is so hard to experience, you have to re-sync with (our) world and leave each other” After spending 40 days together, expedition leader Christian Clot concluded.