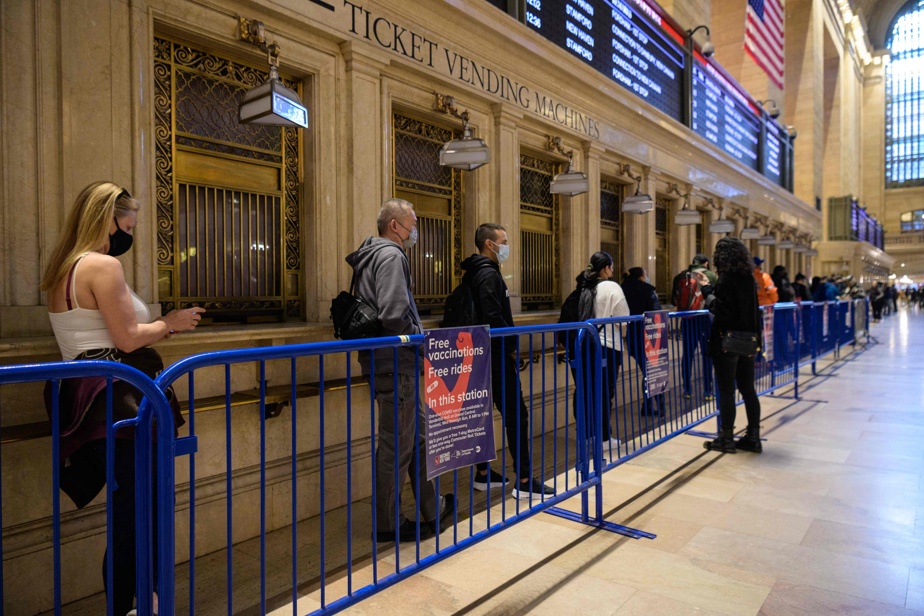 (New York) Deki Tamang is not ashamed of the free metrocard he received on Wednesday morning after receiving a dose of Johnson & Johnson’s COVID-19 vaccine. This unlimited card, which is valid for seven days, prompted her to stand in queue at New York Grand Central, New York’s legendary train station and subway station to be vaccinated.

“I have an appointment to receive my first dose of Pfizer vaccine next week, but by then I’ll be testing. It’s more convenient to get the vaccine today,” explained the 23-year-old marketing student. “And then the Johnson & Johnson vaccine only needs one dose. Another reason.”

With a hundred people in line at Dekii Tamang, everyone has their own reason to respond to the invitation to be vaccinated in Grand Central, one of the six subway stations where New Yorkers can get the Johnson & Johnson vaccine at least until Sunday.

The invitation from New York Governor Andrew Cuomo, along with MetroCard’s offer, had only one goal: to revive the COVID-19 vaccine in New York, a number that has recently dropped. If the experiment is successful, it will continue beyond May 16th.

“The process is not straightforward,” said Patrick Foy, CEO of the Metropolitan Transportation Agency, at a meeting at Vanderbilt Hall in Grand Central where vaccinations are given. “Anyone passing through one of the participating stations, whether a New Yorker or not, can come, check in, get vaccinated, sit for the waiting period. Standard 15 minutes and leave.”

READ  COVID-19: 138 new cases and no additional deaths in Quebec

With $ 33 worth of MetroCard in your pocket.

This is not the only incentive offered by the State of New York to promote the vaccine. Last week, Governor Andrew Cuomo announced that New Yorkers vaccinating at the Yankees and Mets Stadiums can get free tickets to games from these major league baseball teams.

Not to be outdone, New York Mayor Bill de Blasio said Monday that he was offering vaccinated New Yorkers at the Zoo, the Bronx or the New York Botanical Garden to the Brooklyn Cyclones, the free league baseball team at the zoo. , Among others. The city’s offer includes a two-week free membership to New York’s self-service bike ride city bike.

This is not to say that New York State or the city lags behind the rest of the country. According to official data, 39.5%, or 7.9 million, of Empire State residents are fully immunized, and 48.6%, or 9.6 million, have received at least one dose of the vaccine.

There is a similarity in this ratio in New York City, where 39.6% of residents are fully immunized and 46.7% of them have received at least one dose.

This data reduces hospital admissions, contamination and the number of deaths. On Monday, the New York mayor particularly welcomed the 2.01% infection rate, the lowest in six months.

The speed of vaccination is declining in the state and New York as it is elsewhere in the United States. Overall, 46.2% of the U.S. population received at least one dose of the COVID-19 vaccine. President Joe Biden has set a 70% target by July 4. Six states have already achieved this: New Hampshire, Massachusetts, Connecticut, Maine, Vermont and Hawaii.

Other states and cities are competing in their ination hello to promote vaccination. In West Virginia, the governor offers $ 100 in vaccinated savings bonds to residents between the ages of 16 and 35. In Detroit, the mayor promised $ 50 worth of debit cards to residents who drive a fellow citizen to the vaccination site. In New Jersey, the governor and bar owners serve beer to vaccinated citizens.

And in Ohio, the governor announced Wednesday the most enticing incentive: the $ 1 million jackpot per week, the winner of which will be randomly selected from the state’s citizens who receive at least one dose. Five draws will take place on Wednesday, May 26th.

Nothing beats the assurance that Johnson & Johnson can get the dose of the vaccine when arriving at or leaving the subway station.

“It saves me time,” 30-year-old Sona Ango said on Wednesday morning in Grand Central. I do not have to bear the inconvenience of giving an appointment. I leave home half an hour earlier than usual and receive my vaccine on the way to work. It was perfect. ”

The Grand Central vaccination site also attracted at least one UN official, whose headquarters are a few blocks away. This is Thomas Kontogorgos, head of the DDR division of peacekeeping operations.

“I got an appointment next week to get vaccinated, but for personal reasons I have to return to Greece this Sunday,” the 51-year-old diplomat said after topping his line. “While reading a newspaper from Greece I realized that I could be vaccinated here! ”