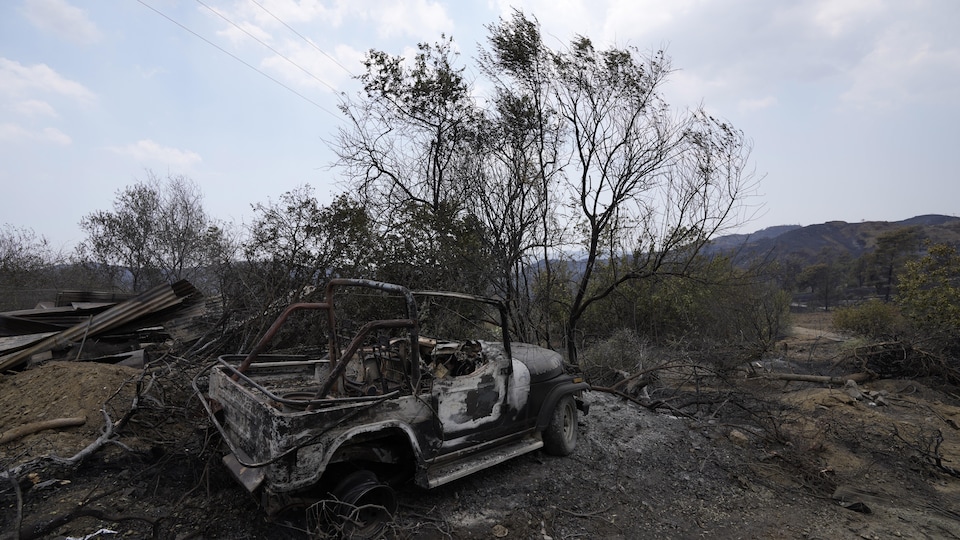 Four people lost their lives in a fire that started on Saturday in the south of the country, almost brought under control on Sunday, the fiftieth birthday, looking into space, with a bitter smell of burning, examining the blackened shoulders of the mountains. She gives the house.

In this area of ​​the Trudos Massif, the main green lung lung of the Mediterranean island, only ash and burnt trees remain.

When she found out that a fire had broken out in a nearby village, Vaso told AFP that she immediately guarded herself.

Twenty minutes later, I saw flames. My husband said to me (over the phone): “Our daughter, take the car and go”. We informed the authorities and set off on the road, but unfortunately the help came late.

Four Egyptians were found dead a few hundred meters from her home. Their burnt car fell into a valley along a dirt road.

The trapped victims left their vehicle before fleeing on foot, but left in the direction of the wind and were caught with the flames at an altitude of 600 meters, a police officer on the spot explained to AFP.

A vehicle carrying four Egyptians who lost their lives.

Going further down this difficult path, five young Indians noticed and dazzled the extent of the damage.

We saw the fires and we set off for Nicosia 22-year-old Aman said. He returned on Sunday after living in Odos for two years.

This is very unfortunate, Assuring that his house and the homes of his relatives were not damaged, he said.

Five kilometers away, in the village of Aracapas, where the fire broke out, residents returned to see the damage.

The olive trees were reduced to skeletons

I cried all over the road while discovering the scenery, Explains Andrea, 30, from the village.

Along the way, the charcoal is replaced by black dry grass yellow. Many olive trees, the symbol of the island, are nothing more than skeletons.

I was so scared and I was still in shockAndrea continues, her hands shaking as she drinks coffee.

President Nicos Anastasiads said on the site that the fire broke out Wide Observed on the island for decades. More than 55 square kilometers were destroyed.

Lives, property, land, forests are gone. The government will provide immediate assistance to the victims and their relatives, Promised the president, that the assessment of the damage was in progress.

A dozen villages were evacuated and fifty houses were destroyed, officials said. In addition, employees said the farm, which has 50,000 chickens, was wiped out by smoke.

It was the worst fire in my life, I had never seen, it was horrible.

The 80-year-old Cypriot, who sits in a village cafe and spends his life in Aracapas, only looks to observe helicopters and tankers flying over the area.

24 hours after the disaster began, Forest Department director Charlambos Alexandro said he hoped the fires had been described. Nightmare, Will be Under supervision As of Monday morning, forces from Greece and Israel had joined the effort.

The still-smoky embers scattered the mountain as temperatures hovered around 35 degrees Celsius in the evening.

Akis Giorgio, 45, Remained in the village to defend [sa] Property, Said with him Relief After the fires in this area were extinguished. It was a nightmare, hell. Fires engulfed the whole of Arakapas.