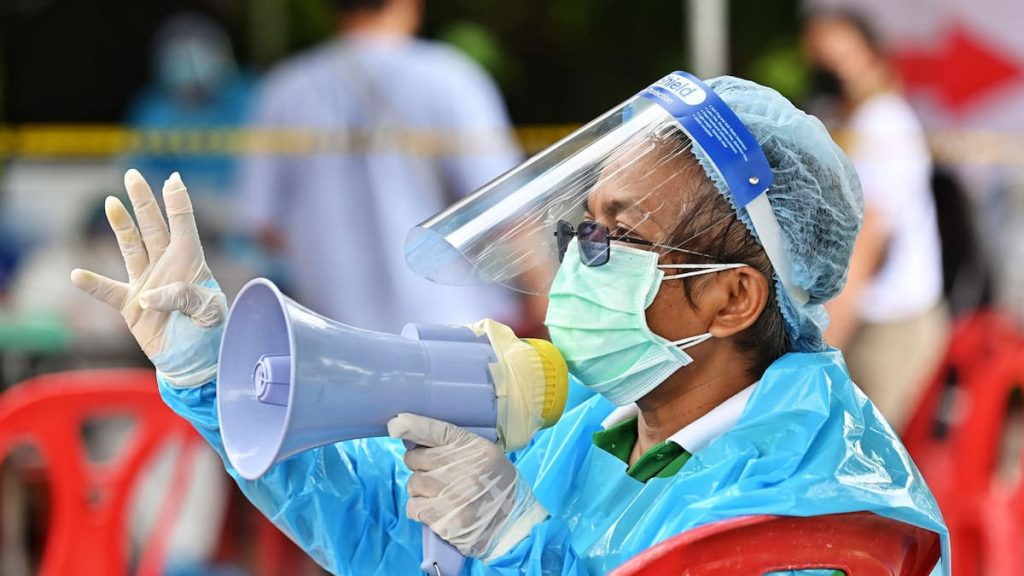 8:52 am | The pandemic: A new acceleration in most parts of the world this week

The COVID-19 pandemic has accelerated this week in all parts of the world except Latin America: Here are the weekly highlights taken from the AFP database. An important indicator, however, is that the number of diagnosed cases reflects only a fraction of the actual number of infections and comparisons between countries should be taken with caution because testing procedures vary from one country to another.

With 416,600 contaminants recorded daily in the world this week, the index has risen sharply (+ 11% compared to the previous week), according to an AFP report that stopped on Thursday. The pandemic is growing again after the pandemic slows down between late April and mid-June.

Again this week, only the Latin American / Caribbean zone improved its situation, with 9% fewer new cases compared to the previous week.

6:50 am | Lambda variant: “Vaccinated person can be better protected”

Virologist Benoit Barbeau agrees. By fully vaccinating most of the population on the track, it is possible to prevent a large spread of the Lambda variant.

The European Health and Safety Commissioner for Food, Stella Kyriakides, said on Friday that the European Union was “prepared” for the possibility of giving the population a third injection of the Kovid-19 vaccine from its manufacturers’ proposed Pfizer / Biotech.

“We are already ready when we need it at the European level and in terms of European strategy,” the commissioner of joint procurement and distribution of vaccines told Spanish Health Minister Carolina Darias at a press conference in Madrid.

“We are constantly working on it, but the decision on this will depend on science,” said Stella Kiriakides.

8:35 am | Indonesia receives oxygen and equipment

Indonesia on Friday received the much-anticipated oxygen cylinders and safety gear from Singapore in support of its health system, which has been rocked by a wave of severe infections caused by the delta variant of the virus.

Hospitals are trying to cope, there are tents in the parking lots, but many are now repelling new patients, causing many sick people to die at home when their loved ones go without trying to get oxygen.

READ  Indian variant: "He is our worst enemy"

6:10 am | Strict sanctions in Thailand, including curfew in Bangkok

Thailand, which has been facing an unprecedented epidemic since the launch of COVID-19, will impose new sanctions, including an overnight curfew, in Bangkok, officials said on Friday.

From Monday, “Unnecessary travel will be prohibited. People will not be allowed to leave their homes between 9pm and 4am unless absolutely necessary, ”said Apisamai Srirangson, deputy spokesman for the Kovid-19 Task Force.

5g59 | The UK is poised to welcome fully vaccinated foreigners

The British government said on Friday it plans to allow people who have been fully vaccinated against the coronavirus abroad “within the next two weeks” to enter the United Kingdom without restriction, as did British residents.

The executive announced on Thursday that only British residents who received two doses of the vaccine as part of an immunization campaign in the United Kingdom would be exempt from detention when returning to England from several countries. Orange ”list, including tourist destinations in France, Spain and Italy.

5:22 am | Indonesia receives oxygen and equipment

Indonesia on Friday received the much-anticipated oxygen cylinders and safety gear from Singapore in support of its health system, which has been rocked by a wave of severe infections caused by the delta variant of the virus.

Hospitals are trying to cope, there are tents in the parking lots, but many are now repelling new patients, causing many sick people to die at home when their loved ones go without trying to get oxygen.

The Scientific Council, which guides the French government during the COVID-19 pandemic, recommends “vaccine responsibility for conservationists” in measures to address the rapid progress of the Delta variant.

The government is working on a bill that could be passed by the end of July in the face of staff shortages in retirement homes and hospitals, and this responsibility is being discussed in France.

3g59 | Kovid-19: The delta variant is almost predominant in France

The Delta variant is rapidly replacing other strains of the COVID-19 virus in France, and it already represents 50% pollution, Health Minister Oliver Warren said Friday.

“The” delta variant, which first came to us from India, “appeared in our country a few weeks ago and was 60% more contagious than other viral species so far,” the minister recalled in an interview with France.

3h20 | “No needles, no work”: Vaccination becomes mandatory in Fiji

“No injection, no job” … The government of the Pacific archipelago has announced that both public and private employees are going to Fiji to be vaccinated in the coming weeks, in the wake of the outbreak of the Asif Delta variant. .