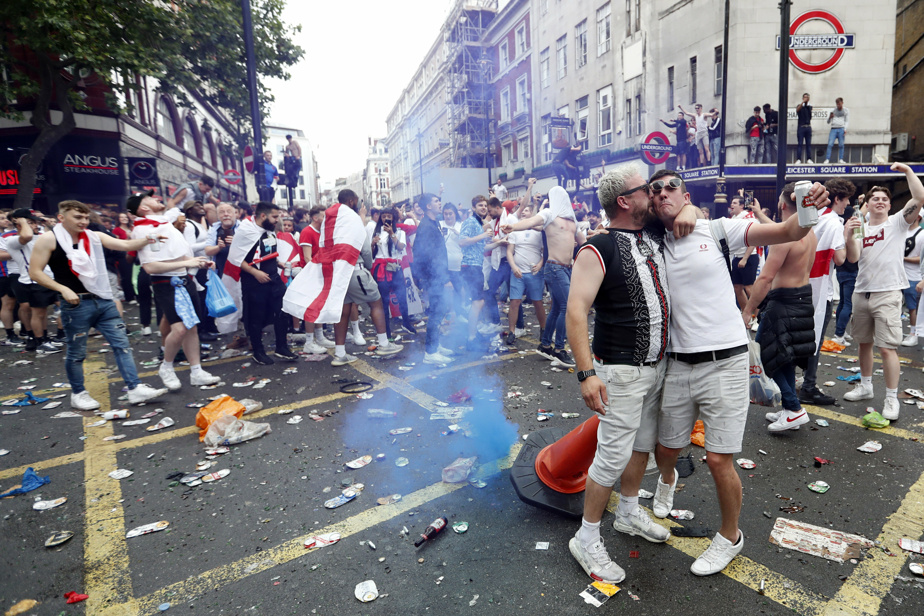 (London) In the streets around London, pubs or Wembley, the temperature rose several degrees for the Euro Final (Sunday night 9), amid excitement and first outcry from supporters ahead of the fiery shock between England and Italy.

Without much respect for barrier gestures, the atmosphere in front of the mythical precinct on the northwest side of the British capital was exhilarating, with songs sung by fans wearing jerseys, flags and hats in the colors of the Three Lions selection.

There was a lot of glass debris on the ground and supporters threw plastic bottles, rocks, beer cans, backpacks or signaling cones into the air. Supporters also burned the Italian flag in central London, the AFP found.

According to images posted on social media, dozens of ticketless fans knocked down barricades and overwhelmed security personnel as they tried to enter the perimeter of Wembley Stadium.

In a statement, the campus management company identified an “incident” that required police intervention, but assured that no person without a ticket “entered the stadium”.

For this historic day in England, which hopes to win its first trophy and its only world title for 55 years, the press releases: “The Pride of England”, headline Sunday people On its cover are coach Gareth Southgate, his players and the roaring lion.

Schools across the country announced Monday that they would tolerate the arrival of children, enjoy watching the game.

In a country plagued with a delta variant of the coronavirus, despite warnings from authorities, the English are spending a mesmerizing sporting break that some thought would extend to London night, without worrying about health needs.

Even in Italy, Azzurri’s beautiful Euro brought back the sweet scent of “Magical Nights”, a memorable evening ensemble at the 1990 World Cup home.

Tears of joy and sadness cannot be held back by any cheeks, so the outcome of the peak looks uncertain.

Ever since winning the 1966 World Cup over Germany, already at Wembley, England’s red and white tides have been dreaming of a selection that has been dropped from the title.

Gareth Southgate was not born at the time and therefore did not hold any English title. The Three Lions had never reached the continental final before and after a missed shot on goal at home in the Euro 1996 semi-final, he became aware of it.

“Since the end of the first round, we have had the opportunity to write a page of history in every game,” he said on Saturday. We are impatient, it is a great match to prepare against a great opponent, technically very good, very organized ”.

READ  Alone on the boss | Press

“It would be a wonderful night if England won, it’s been a long time coming,” said David Durant, a 74 – year – old English pensioner, who was met by the AFP on the outskirts of Wembley just hours before the kim-off.

Fascinating once again after dark years, Italy hopes to fill its trophy cabinet fifteen years after winning the 2006 World Cup and nine years after failing in the Euro 2012 final.

Roberto Mancini led the Bonucci-Chiellini duo to a resounding defense, scoring an unbeaten run in 33 games and building a cheerful team coming to Wembley to win back the Azzurri.

England further strengthened their defense by giving priority to Kieran Tripper to winger Bukayo Saka next to the iron axis by John Stones and Harry Maguire. Her impressive midfield with Calvin Phillips and Mason Mount and her formidable attack with Rahim Sterling and Harry Kane can also be counted on.

Chiell warns: “Fortunately, this is a team sport: the important thing is that either Bonucci or Chiell won over Kane or Sterling, but Italy won over England”. The English hope for the opposite result, at the end of an evening, which will be one of the longest and most attempts of their existence.