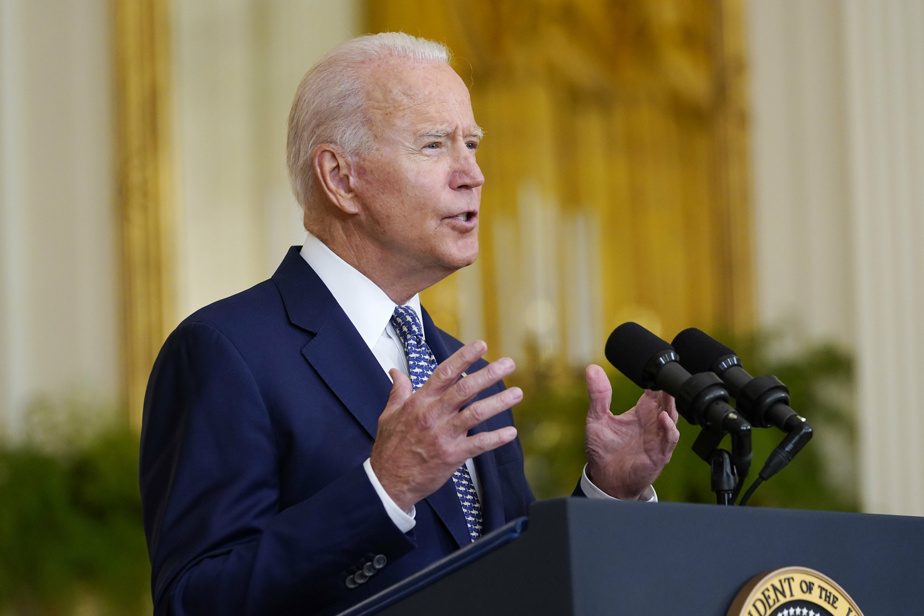 (Washington) Elected officials from his own camp are frustrated, public opinion and bitter international allies: President Joe Biden appeared alone on Tuesday as the White House struggled to manage its withdrawal from Afghanistan.

His posture is very simple: “I’m the President of the United States and, in the end, I guess myself,” Joe Biden said in a short speech at the White House on Monday, before resuming his interrupted holiday at the David Camp residence.

While waiting for the U.S. president to speak again Wednesday in a television interview, his national security adviser Jake Sullivan defended his employer on Tuesday.

“When you put an end to twenty years of military intervention […] You have to make tough decisions, and none of those decisions will have a flawless outcome, “he told a news conference.

The decision to withdraw American troops so far, was initially taken by Donald Trump, and Joe Biden has become popular with American public opinion confirming the August 31 deadline.

But Americans were shocked to see the speed with which the Taliban controlled the country through shocking images of Kabul airport on Monday by the U.S. embassy disaster evacuation.

Of the 1,999 voters polled by Politico and the Morning Consult from August 13 to 16, only 49% supported the decision to leave the Democratic presidency, up from 69% in April.

The Biden administration, which wants to be efficient and well-organized for consultation at the national and international levels, will also be attacked on the ranks of elected Democrats.

Democrat Bob Menendez, head of the Senate Foreign Relations Committee, said he was “disappointed” that the Biden administration had failed to “clearly acknowledge the consequences of its rapid withdrawal.”

“For months now my appeal to the administration has been to take care of the paperwork after we have emptied the Allies and kept the heroes safe. And they have not heeded this call,” Seth Moulton, a veteran in the American military, condemned and elected a Democrat in the House.

The American president has been criticized for his apparent coldness, he is always full of empathy with his compatriots.

“While the tone he used to describe the Afghan army and government is compassionate and unintelligent, these Afghans dominate the screen through images of them trying to escape the nightmare,” Irfan said. Noorduddin, a South Asian expert and professor at Georgetown University.

The White House has accused Afghan soldiers trained by the United States of withdrawing from fighting the Taliban.

Finally, Joe Biden, who regularly boasts of his long experience in foreign policy and regularly affirms that “America is back” in the international arena, faces the bitterness of the Allies.

The U.S. president spoke to British Prime Minister Boris Johnson on Tuesday that he would not speak to any foreign head of state or government after the fall of Kabul.

According to a press release from the House, the two men “agreed to hold a virtual summit of G7 heads of state and government next week to discuss common policy and strategy.”

Joe Biden’s decision was publicly criticized by the British government, which resulted in the withdrawal of NATO forces, including the British. Twenty years of intervention in Afghanistan have killed 457 British soldiers.

READ  What is the role of microbiota?

“Images of despair at Kabul airport are an insult to the political West,” German President Frank-Walter Steinmeier said on Tuesday.

While Joe Biden argues that he is withdrawing from Afghanistan, the United States is dedicated to their confrontation with Beijing, especially with great challenges, and there is currently an explosion in Chinese rule.

Chinese Foreign Ministry spokeswoman Hua Chunying said Tuesday that Americans were “left in a state of chaos” in Afghanistan.