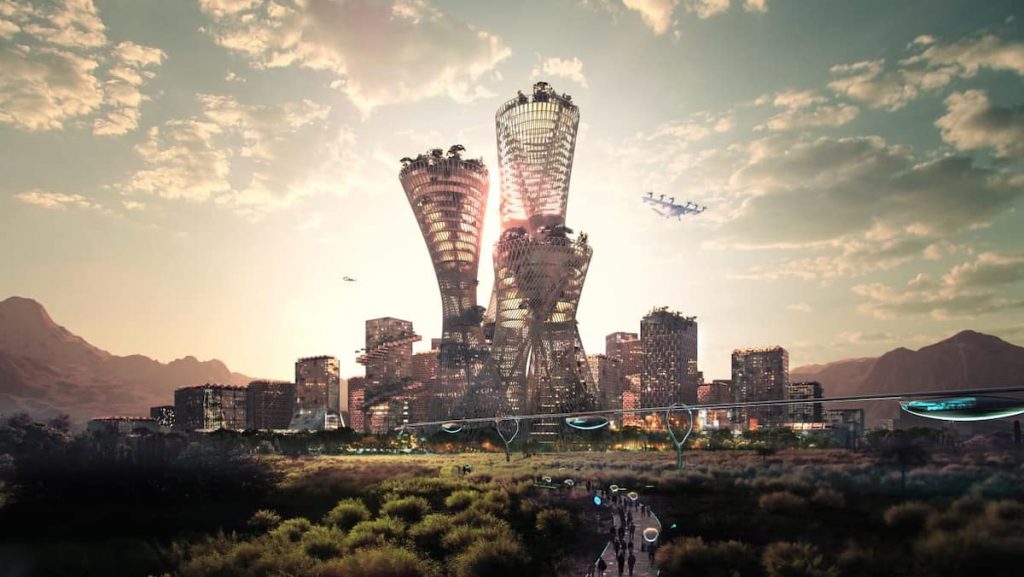 Tokyo’s cleanliness, New York diversity and Stockholm’s social services: Billionaire Mark Lore has set his vision for the new city of 5 million and retained the services of a world – renowned architect for design.

The so-called “15 Minute City Concept” allows residents to access their offices, schools and facilities within a quarter of an hour from their homes.

Although planners are still researching locations, lands in Nevada, Utah, Idaho, Arizona, Texas and the Appalachian are also possible targets, according to the project’s official website.

With the ban on fossil fuel vehicles in the city, “self-driving cars” roam the sunny streets along with scooters and pedestrians.

A skyscraper project, nicknamed the Equity Tower, has been described as “a beacon to the city”.

The building has an elevated water tank, aeroponic forms and a photovoltaic roof, which generates energy.

The first phase of construction, which will accommodate 50,000 residents on 1,500 acres, is estimated at $ 25 billion. The total project is estimated to exceed $ 400 billion and the city will reach a population of 5 million in 40 years.

Town planners are expected to contact state officials “very soon” to welcome the first residents by 2030.

In addition to innovative urban design, the project calls for transparent governance and a “new model of society”. Taking its name from the ancient Greek word ‘telos’ (a term used by philosopher Aristotle to describe an inherent or superior purpose), it allows city dwellers to ‘participate in decision making and budgeting’.

In the promotional video, Lore described his proposal as “the most open, fair and comprehensive city in the world”.

Lore founded jet.com before selling it to Walmart and joined the retail giant in 2016 as head of ecommerce in the United States.

He left the company earlier this year, and his retirement plans include working on a reality TV show, advising business startups and building a “future city”.

On Telosa’s official website, Lore explained that he was inspired by Henry George, an American economist and social theorist. The investor cited “major flaws” of capitalism, many of which he attributed to the “American-built land ownership model”.

“Telosa’s goal is to create a more equal and sustainable future. He is our pole star,” Lore promised.

BIG founder, Danish architect Jorke Ingels, says Telosa “has the social and environmental concern of Scandinavian culture, as well as the freedom and opportunities of more American culture.”

It was not the first new city planned by the Ingles Company, which set up a ski slope above the power plant in Copenhagen and helped create Google’s new headquarters in London and California.

In January 2020, Japanese automaker Toyota revealed that it had hired BIG to create a master plan for the new town of 2,000 people at the foot of Mount Fuji. Although significantly smaller than Telosa, the project, known as Woven City, guarantees autonomous vehicle testing, smart technology and robot-assisted living.