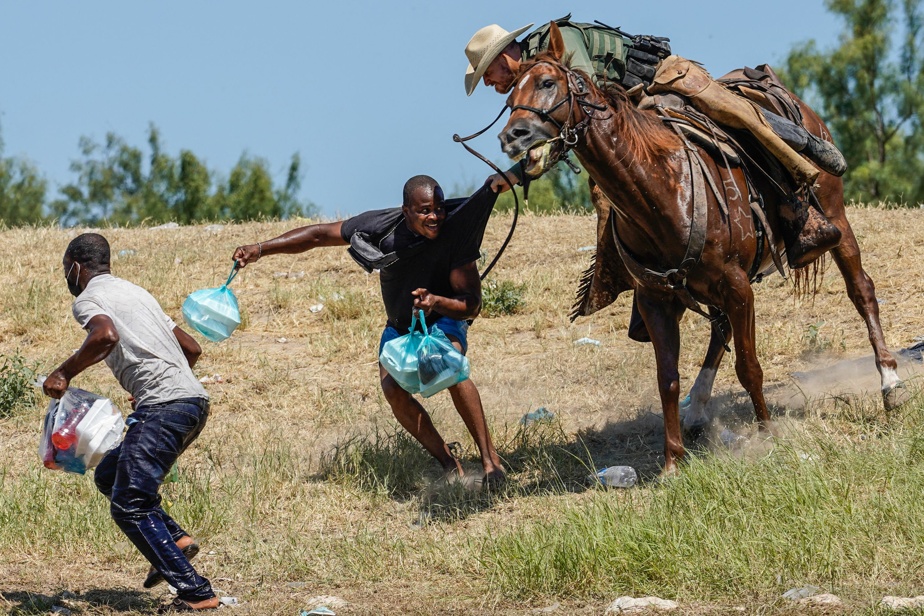 (Del Rio) Photos showing border guards pushing back immigrants near Del Rio, Texas, caused a stir in the United States on Monday, where President Joe Biden announced that the government was launching an investigation to bring the facts to light.


In a snapshot taken by a photographer who worked for AFP, an agent on horseback grabbed a man with his t-shirt. In another, he keeps the group away by twisting his reins in a threatening pose.

Democrat Benny Thompson, who was elected chairman of the Committee on Internal Security in the House of Representatives, said in a statement:

“It’s awful to see,” White House spokeswoman Jen Saki told a news conference. “I do not know the context, but I do not see any framework that is appropriate,” she added.

Secretary of State Anthony Blinken met with Haitian Prime Minister Ariel Henry on Monday to “assist in the repatriation of Haitian migrants south of the United States border,” the State Department said.

The two men expressed “their general concern for the safety of Haitian citizens.”

Anthony Blinken spoke by phone with his Mexican counterpart Marcelo Ebrard, a spokesman for “coordination for the management of the influx of secret immigrants.”

An equestrian patrol was deployed Sunday near the Rio Grande River, where thousands of immigrants, most of them Haitians, have been camping for several days in hopes of reaching the United States, the chief told reporters. Border guards Raul Ortiz.

“I asked them to find out if people were in trouble and gather information about the smugglers,” he stressed, adding that it was difficult to control a horse in the river.

In light of this, some seem to have used long reins, added Alejandro Mayorkas, US Secretary of Homeland Security. “We will conduct an inquiry to make sure the situation is really the same, otherwise we will act accordingly,” he said.

Paul Ratze, author of the photos, said the scene occurred while immigrants were washing in the Rio Grande or crossing a river to collect food in Mexico and bring it back to their families on American soil.

Suddenly five or six officers arrived on horseback and asked to return to Mexico. “The situation was tense and immigrants started running around them,” he reported. “An officer grabbed the man in the photo with a T-shirt. I don’t think he was injured.”

“I didn’t see the lashes, but the agents twisted their reins,” he said.

Then the tension subsided, and the border guards allowed these immigrants to join the makeshift camp.

The influx of migrants to the border has become a crisis for the Biden administration.

In Del Rio, Alejandro Mayorkas claimed that he had received false information about the possibility of Haitian immigrants staying in the United States, as well as that the United States was speeding up the process of repatriation to Haiti, and that it was safe for them to return.

“We reiterate that our borders are not open and that people should not travel so dangerously,” the secretary said.

“If you come to America illegally, you will be deported,” he added.

Alejandro Mayorkas also said it was reasonable to send these migrants back to Haiti, despite the political instability there, the aftermath of the August 14 earthquake in the southwestern part of the country.