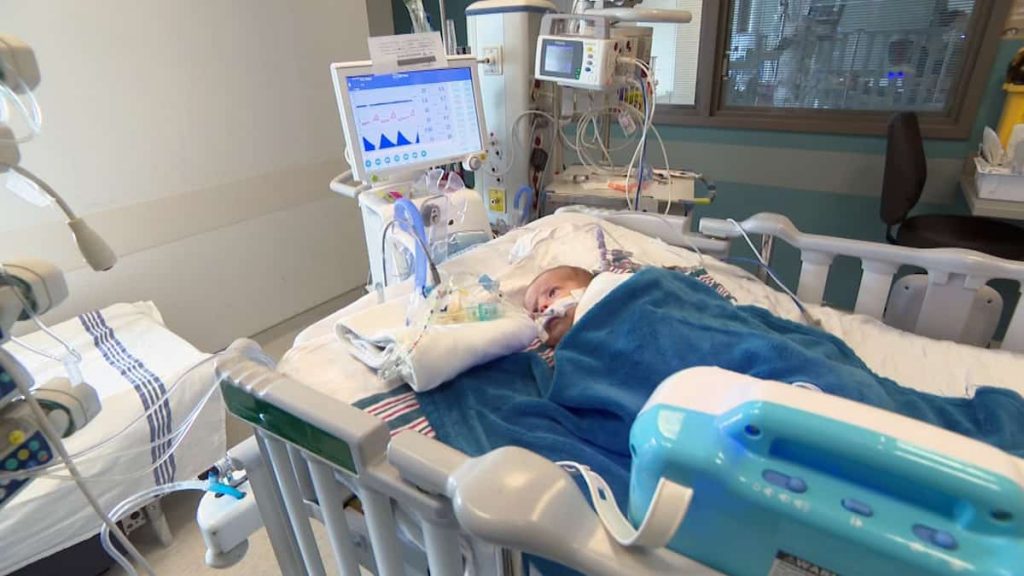 Ludo, a two-month-old baby, has been battling bronchiolitis caused by the respiratory syncytial virus for two weeks.

“He started running out of his nose. Three days later he was white and limp. He had no more voice. So I contacted the emergency room in Val-de-Orre. Three days later, his condition deteriorated, so we were transferred here, to Montreal, for children. Said his mother, Genevieve Lazoi.

The baby is not alone in this situation. Doctors are seeing a worrying increase in cases of respiratory syncytial virus in infants.

At Montreal Children’s Hospital, most of the intensive care beds are occupied by infants with the respiratory virus.

“Of the 16 people infected with the respiratory virus, 11 were patients. These are patients in mechanical ventilation, non-invasive care – we know CPAP, BiPAP – and some will be intubated and ventilated, ”explained Mary Dagenice, head nurse at Intensive Care at Montreal Children’s Hospital.

The increase in these cases, observed since August, is linked to the COVID-19 epidemic.

Because of the important health measures put in place to fight the epidemic, children and their mothers are not regularly exposed to respiratory viruses, typically 90% of children under 2 years of age.

“When they catch their first infection, the virus can travel from the upper lungs to the lungs. Quebec has been harder so far and it’s starting to appear in Ontario,” said Dr. John Paul II, an infectious disease specialist and microbiologist at Montreal Children’s Hospital.

Respiratory syncytial virus is usually caught like all other viruses.

Three-and-a-half-week-old Little Chloe caught the virus from her brothers.

“She has two older brothers, so it could be from them. They’re sick too, on the other hand, it’s a little weak,” said his mother, Mary-Christine Sear.

Parents are also very worried about their newborn.

“The vocal cords, at the throat, were under general anesthesia to see if anything was damaged or if it was actually damaged. There were problems with everything,” he explains. Chloe’s father, Jonathan Dubey.

Ophelia, who was hospitalized at Montreal Children’s Hospital when she was just one month old, also contracted a respiratory virus from family members.

“She had bronchiolitis. Her sister brought her home from daycare. So she had to be interviewed very quickly, and then we were transferred here for more special care, ”said her mother, Amelie Jean, who said it was very difficult for her not to take her daughter as she wanted.

Fortunately, deaths from the respiratory syncytial virus are very rare.

With the onset of winter and the flu season, groups of children are still on the alert.

– According to information from Harold Gagney