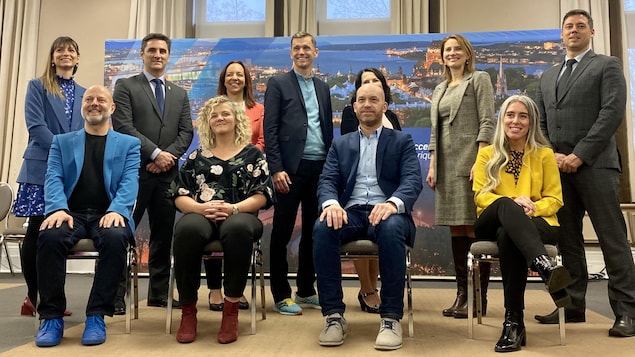 The mayor exceptionally appointed councilors elected under the banner of his party Quebec Forte et Proud.

Mary-Josie Asselin of Loretville District is the first Vice Chairperson of the Executive Committee and is responsible for sustainable development and emergency preparedness.

Pierre-Luc Lachance, Councilor for Saint-Roch-Saint-Sauveur District, 2nd Vice-Chairman of the Executive Committee and is responsible for economic, transport and democratic life, citizen interaction and supply and material resources.

Maud Mercier-Laurace, elected in St. Louis-Sillary, will represent the citizens on the tram file and be responsible for the mobility and communication files.

The files on land use planning, housing, social housing and community development and seniors are in the hands of Mary-Pierre Boucher of Louis XIV district.

Steve Verrett has already announced that he will be joining the Executive Committee Hybrid Mayor Bruno Marchand. He is responsible for the maintenance of motor equipment, maintenance of buildings, engineering and maintenance of water and sewerage systems.

The advisor, who was elected on November 7 under the banner of Team Mary-Josie Sward, now sits as an independent adviser.

Two members of the Mary-Josie Saward team will be part of the mayor’s intimate defense. He will be the Associate Adviser on the David Weizer (Plateau District) Executive Committee. He has the command to live together.

I found a man in Mr. Gasselin who wanted to work for the City […], To cooperate with great publicity. We are able to sit, Said the new mayor.

The two leaders clashed several times during the election campaign.

⁇ We have files that are not linked. […] We did not respect each other. We are always able to talk to each other, greet each other, treat each other with respect. ⁇

Between the two chairs

Bruno Marchand said he was aware of the difficulties involved in acting as an associate adviser and needed to defend both the City and their party positions.

That’s why associate advisers make the decisions associated with their file, but It does not have to approve all the decisions of the board because it is not a shareholder, The mayor suggests.

It was for this reason that Steve Verret decided to leave his party and sit as an independent candidate.

According to Bruno Marchand, the former mayor of Quebec, Jean-Paul L’Aleur, has resorted to this work.

The first meeting of the Executive Committee will be held this week.