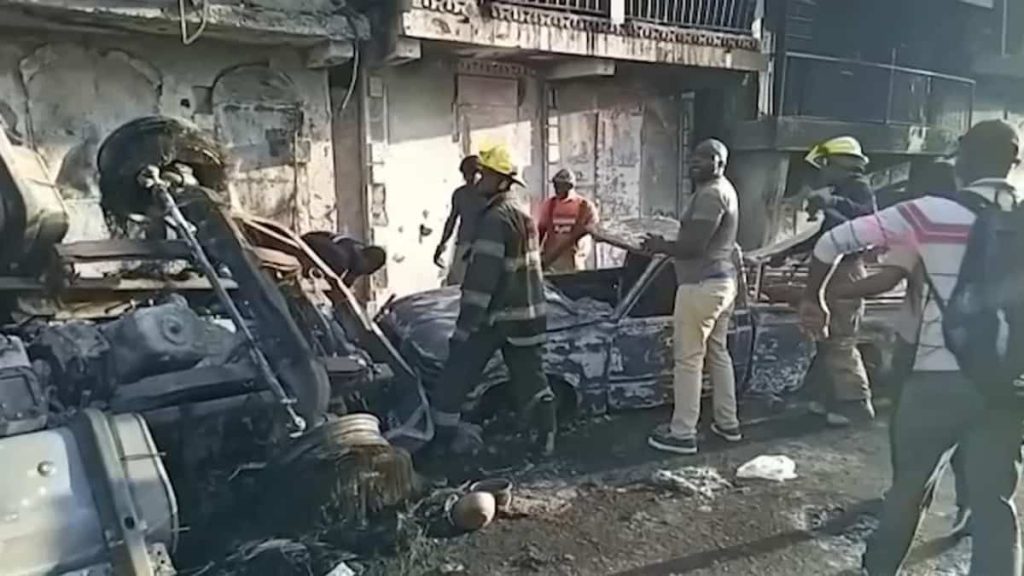 Also read: Four months after the earthquake in Haiti, 400,000 students and teachers are still out of school

The tragedy occurred in the Cop-Haitian city, the second largest city in the Caribbean, which was badly damaged by natural disasters along with security and financial crises.

According to Cap-Haitian Deputy Mayor Patrick Almonor, the tanker driver tried to avoid colliding with a motorcycle taxi, causing his vehicle to overturn.

Residents rushed to the truck despite driver warnings to retrieve much less fuel in Haiti, before most were killed in the blast.

“The toll has gone up. We have now registered 60 deaths, ”the deputy mayor explained. He said investigations are ongoing.

Haitian Prime Minister Ariel Henry declared three days of national mourning on Twitter “in memory of the victims of this tragedy that is plaguing the entire Haitian nation.”

“Twenty” houses around the site of the blast also caught fire after the blast, raising fears of a huge toll, according to Mr Almonor.

He said details on the number of victims in the homes could not be said yet.

Identifying victims can also take time. The deputy mayor said it was “impossible to identify them” because of their burns at the moment.

Currently, high health services are trying to cope with the influx of patients in need of emergency care.

“We have no way to take care of so many severely burned people,” a nurse at Justinian Hospital, where many of the injured were, told AFP. “I’m afraid we can not save them all.”

“People burn more than 60% of their body surface,” said Dr. Calhill Turenne, who said 40 people were seriously injured and two died at the hospital.

The Prime Minister, who faced the Emergency, also announced the deployment of Field Hospitals “to provide much needed care to the victims of this horrific explosion”.

Haiti, a poor Caribbean country, is reeling from severe fuel shortages as a result of a gang strangle it as part of a refueling circuit.

In recent months, armed gangs have tightened their grip on Port-au-Prince, controlling the roads leading to the country’s three oil terminals.

Gangs demanding huge ransoms for the release of drivers have hijacked more than a dozen fuel transport vehicles.

Provokes strong dissatisfaction in the population; Demonstrations also took place in Haiti on Monday against the increase in gasoline prices.

Since October, telecommunications networks and media antennas have greatly reduced their operations across the country as they could not find fuel for thermal generators supplying electricity.

The energy crisis is also affecting the performance of some hospital structures across the country.