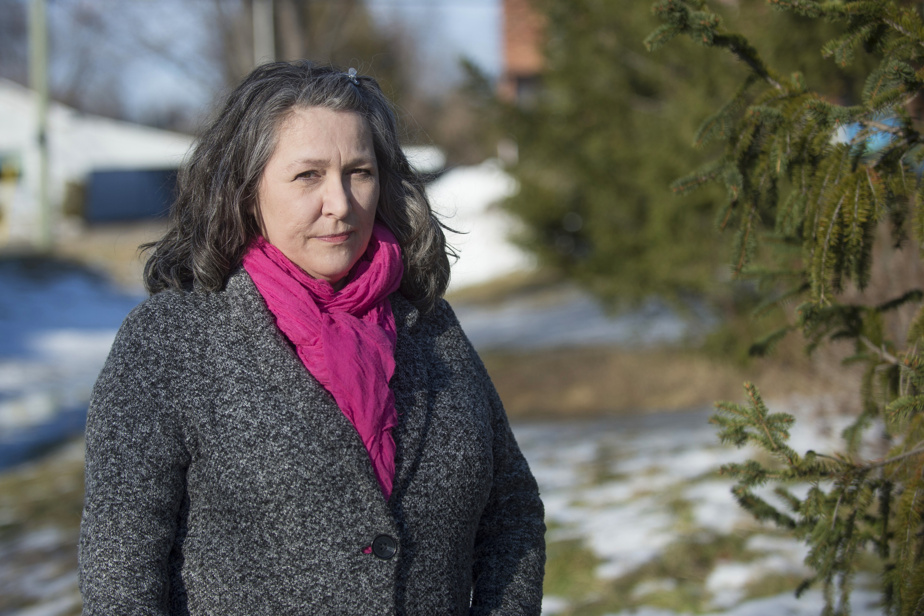 The Laval woman claimed that a Laval police officer “jumped on her” at her home last summer, asking her to wear a mask during her own requested intervention.

At 4:30 a.m. on Aug. 15, Monique Mercier said she felt uncomfortable and dialed 911. Shortly afterwards, police and paramedics arrived at her apartment on the Boulevard des Laurentides in Laval. She told them her condition had improved and that she no longer needed help, but first responders wanted to come “to make sure everything was fine”.

In his kitchen were four police officers and two paramedics. Everyone except a police officer wore a blue intervention mask, covering his face, she recalled.

MMe Mercier, 56, who suffers from autoimmune disease and fibromyalgia, said he asked police to wear a mask. “I even gave him a box of new masks, but he said he did not want them.

M. who faced this rejectionMe Mercier said he went to pick up his cell phone and wanted to film the operation.

When I said the word “movie”, I did not even have time to look up, and the police jumped on me. My phone flew in the air. He pinned me on the floor, in the living room … it was violent.

Then the police officer put his hands behind his back to shackle him. “I’m not 30 years old, so provocative, I can not do it anymore. I still find it hard to talk about it. […] I screamed, it hurt. I have arthritis in my shoulders and the pain is severe. He handcuffed me four months later and still has marks on my wrist. It hurt so much, I lost track of what happened next. ”

MMe Mercier explained that he regained consciousness in the ambulance. At that time she was very restless and had difficulty breathing. She has no shoes, no purse or her phone. According to an automatic recording made by Argentes-Sante in the ambulance, and according to what she could get, she kept repeating: “Why did he jump on me? ”

In the report prepared by the police officer, she was able to get under Law regarding access to documents held by public bodies and protection of personal information And it is written that we were able to contact, MMe When the first respondents came to her house, Mercier was “talking confused.” She is “consistent” with the police officer, she “becomes more aggressive” and “wants to get him out of his apartment”, we read.

Police NotesMe Mercier has a “sophisticated alcoholism” and has scissors and knives in the “dirty” apartment kitchen. “He quietly brought her to the ground for our and his safety,” police said.

Mr.Me Mercier is sent to the emergency room. This law gives the police extraordinary powers when they observe a person “presenting a serious and imminent danger to himself or others”.

MMe Mercier said most of the information in the report was incorrect.

“The police did not write a single word about the mask and my intention to film it,” she said. He is trying to show me as a lunatic in his report for justifying my forced hospitalization. ”

Contrary to what was written, she said the scissors and knives were stored in a drawer and were not visible or available. She adds that her apartment is “small”, but “not dirty”. “And as he said I was far from drunk. I took two glasses of wine,” she said.

A spokesman for the Laval Police Department, Sergeant Genevieve Major, explained: “According to the information available to us today, the intervention was in accordance with good police policies. We encourage MMe Contact us if Mercier wants to discuss or complain about his situation ”.

MMe The main notes are that it is the policy of the police officers to wear a mask when going inside.

However, there are emergency standards. We all understand that a police officer who arrives in an emergency situation is more likely to be without a mask.

MMe The Major spoke with the police officer who intervened. “He said he always wore his mask and maybe that day, he wore it badly, it was under his nose or he fell during the operation,” a- she stressed.

Police MMe Mercier did not cooperate as she was handcuffed and the officers had to pick her up, which could mark her skin.

Published in Press On Montreal’s account last week, a police officer allegedly assaulted him after he was asked to wear a mask at the time of his arrest.Me Mercier described his misfortune. She then lodged an ethics complaint against the police officer. MMe Mercier said he had been living in agony since Aug. 15. “I do not want a police officer to enter my house anymore. It’s over, ”she said.

Antoine Leclerc-Loiselle, Public Relations Adviser at the Commission des Norms, de l’Nergi, de la Sante et de la Securటేtre du Travel (CNES‌T), “Officers who wear the mask are required to wear a mask rather than necessarily on the inside and out.” For.

For preventive purposes, it is necessary to respect at least one of the following actions: 1 meter physical distance inside and outside, physical barriers and wearing a quality mask.

To work outdoors, it is necessary to wear a quality mask “if interactions with others within a meter are unavoidable”.

Earlier this year, the Quebec government recalled being allowed to film police interventions.

“Yes, citizens who think they are witnesses to inappropriate gestures [de la part de policiers] They have the full right to shoot them, “said Benoit Charett, chief of The Christian Science Monitor’s Washington bureau.