Since the beginning of December, the media has agreed to accuse non-vaccinators of satisfying hospitals and especially resuscitation. It is fashionable to give a ratio of “9 out of 10 people admitted to the hospital are not vaccinated”[i] “. We have already shown in 2 previous videos[ii] Created from ATIH reports[iii] Traditional hospital care or resuscitation services will never be satisfied in 2020. It is still the same in 2021. Although we are in the winter and therefore respiratory infections, including coronaviruses, are hospitalized, only 15% of critical care services are used by patients listed as Kovid-19 and half of these are not vaccinated. Therefore, we see in detail that there is still nothing to worry about in the hospital situation and that those who are not vaccinated are in no way responsible for the hospital situation. Political choices only.

Hospitals were not satisfied due to Kovid-19

We have already demonstrated this in 2 previous videos due to reports from ATIH and the Court of Auditors[i]. The French hospital will always be satisfied in the year 2020 due to Kovid-19. Only 2% of patients diagnosed with Kovid-19 represent activity and hospitalization is minimal throughout the year. As low as 2%, Kovid-19 declarations are very generous to billing problems, but it is very beneficial for the hospital to declare the patient as infectious rather than the pathology he came from. Critical care services are also underutilized and overuse of resuscitation services is a sham due to the mere redistribution of continuing care beds into resuscitation beds.

Today, everyone on the Géodes site can see that 3,000 patients have been declared Kovid-19 and enrolled in critical care services.[ii]. According to ScanSanté statistics, there are 20,000 beds[iii] Critical care in France. So today, 15% are used by patients declared as Kovid-19 (Figure 1). We also noted that 3,000 advances for Covid-19 patients were the number of patients in critical care (i.e. the number of patients in the continuum care, intensive care and resuscitation departments in addition), so this number came up. The number of beds available is limited to the number of intensive care beds (hence 6,000 instead of 20,000), thus indicating that saturation does not exist.

Keep in mind that for almost 2 years, the only reports from hospitals of acute respiratory infections (ARI) were Kovid-19. All other declared causes have disappeared, especially the famous flu. Therefore it is very common for elderly patients to come to the hospital with ARI when winter comes. It does not stop with preventive injections. It is therefore not entirely credible to believe an exceptional situation with such low statistics. There is nothing in the current campaign other than the repeated imposition of injections on the entire population regardless of health condition. There is no minor affiliation between the two. The Ministry of Health, therefore, skillfully selects its indicators to continue the fear on non-subjects by targeting those who are not vaccinated, without talking about the avenues required for the proper functioning of the hospital.

Vaccines do not satisfy hospitals

Media pressure always follows press releases from the Department of Research, Studies, Evaluation and Statistics (DREES) of the Ministry of Health. The one in mid-November is named “”. There are nine times more critical care records in people who have not been fully vaccinated than in people 20 years of age and older. ” [iv]. The media clearly misunderstood the headline, pointing out that “9 out of 10 people in critical care are not vaccinated”. By the way, read the press release to find out: ” Among those who have been fully vaccinated, on the other hand, the number of people entering critical care is increasing: it reaches 3 per 1 million people who are fully vaccinated; This population represents 42% of those admitted to critical care and 48% of those admitted to a conventional hospital, while it represents 86% of the population aged 20 years and over. “As many as 9/10 people were vaccinated in critical care, almost in October, according to data from DREES on admissions for these services. From November, 58 non-vaccinated people in critical care increased to 50/50. People have been vaccinated (Figure 2). 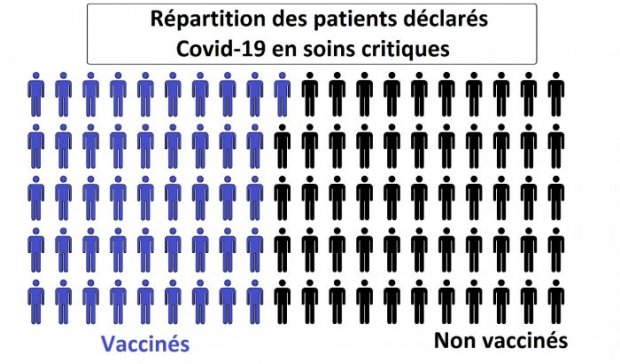 The DREES ratio of “10 to 9” is a pure theoretical calculation resulting from an estimated share of the number of vaccinated people in France (Figure 3). According to DREES, 86% of people over the age of 20 are vaccinated.

Figure 3 : Diagram of vaccine status in the French population 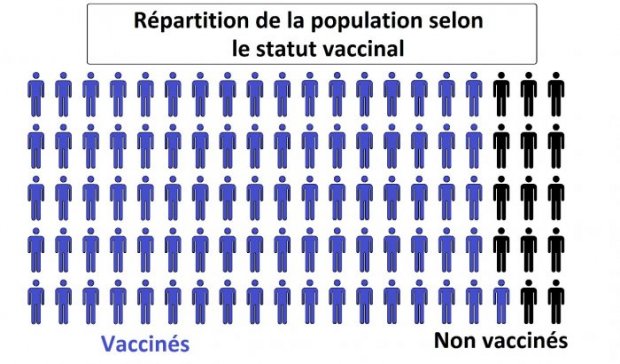 We add that we learned from the ATIH report on Kovid-19 that almost 20% of patients report Kovid-19 coming to the hospital for a completely different reason, although its codification allows most “Kovid-19” hospitals. More interesting billing, we can schematize the current distribution in critical care services: for every 100 beds available we have 15 patients identified as “Kovid-19”, 3 did not come to the hospital because of this, 6 came for this and were vaccinated, 6 Came for this and were not vaccinated.

About 6% of Kovid-19 patients who are not vaccinated for Kovid-19 are in critical care beds in the hospital.

So the conclusion is simple: no, those who are not vaccinated are in no way responsible for hospital satisfaction. Their number in the hospital is very small.

Let us recall that since the introduction of the tariffs on the Jean Costex Act, hospitals and emergency services have been on continuous strike for many years and until 2020, in protest of the shortage of human resources and the inhumane and purely financial management of the hospital. 2007. Nothing has changed except the removal of tens of thousands of hospital beds in 2021 and the removal of caregivers who are reluctant to pay for experimental injections. But, the government today recognizes itself as a victim: it makes people believe that it is necessary to pay billions of euros to laboratories to manage vaccines, and hospital problems, so that they can give us regular injections. These same labs have very close economic ties to our policies. The sheer rush we see only leads to the question: how far can they take people for fools before they wake up?