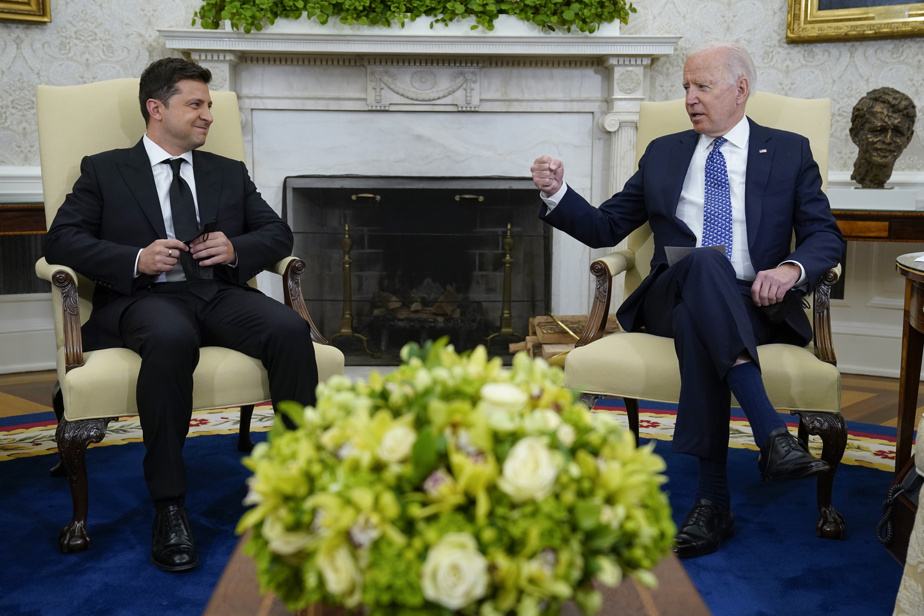 
“I make it clear to President Putin that we will adopt tougher sanctions and increase our presence in Europe and our NATO allies,” the US president said in a telephone interview with Mr Putin on Friday.

For his part, the Russian president said the new sanctions on Moscow were a “big mistake.”

After this 50-minute telephone conversation – the second in less than a month – though, the two men praised the diplomatic way out of the crisis.

Joe Biden “will discuss Russia’s military deployment along the Ukraine border and review preparations for the next diplomatic meetings aimed at easing tensions in the region,” the official said.

Volodymyr Zhelensky said in a tweet that he was “impatient” to discuss with the US president “ways to coordinate our efforts for peace in Ukraine and security in Europe.”

Meanwhile, Foreign Secretary Anthony Blinken announced on Friday that he had phoned NATO Secretary-General Jens Stoltenberg. In a tweet, the US diplomat called on Russia to “take seriously” the talks aimed at easing tensions around Ukraine.

Kiev and its Western allies are accused of deploying tens of thousands of troops across the country’s borders in anticipation of an invasion of Moscow.

Mr Stoltenberg tweeted that NATO was “united” and “ready for dialogue.”

The United States and Russia will hold talks on Ukraine in Geneva on January 10-11. The Russia-NATO meeting will be chaired by US Deputy Secretary of State Wendy Sherman and her Russian counterpart Sergei Ryabkov on January 12, followed by a meeting on January 13 at the OSCE Framework.

The United States has been accused of leading some international issues without caring much about its allies, and has insisted on closer coordination with Europeans and Ukrainians.

Russia, which has already occupied part of Crimea territory in 2014, is also widely regarded as the godfather of pro-Russian separatists in the conflict that has been raging in the east of the country for nearly eight years.