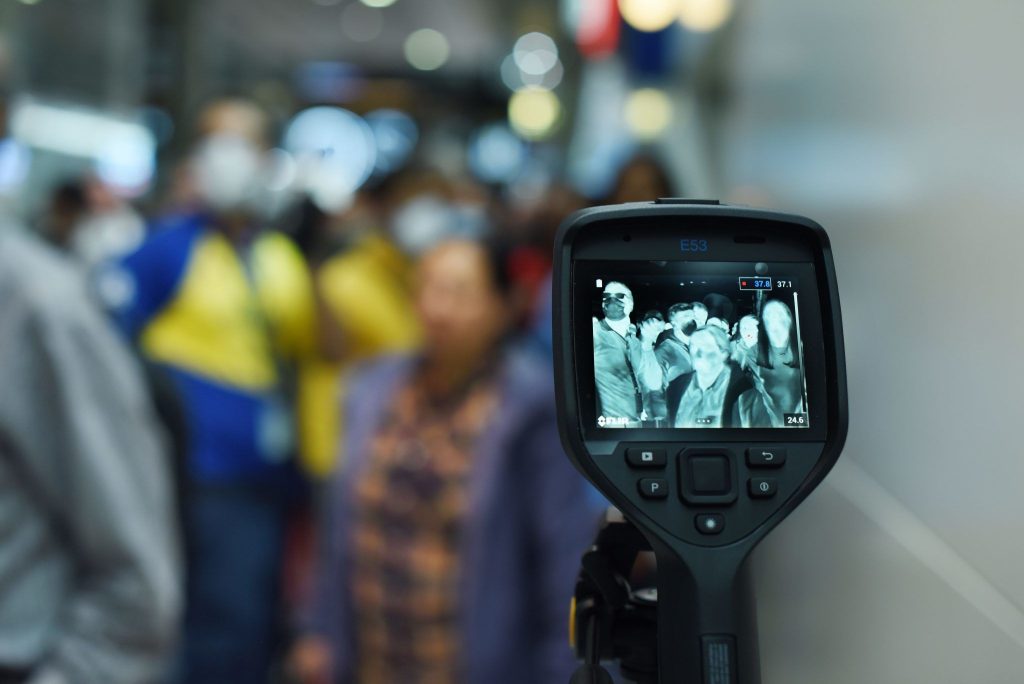 An infrared, IR or thermal imaging camera detects and measures the infrared radiation emitted by objects, often known as their heat signature.

To do this, the camera must first be outfitted with a lens that enables infrared wavelengths to pass through, concentrating them on a particular sensor array that can detect and interpret them. The sensor array is made up of a grid of pixels, each of which response to infrared wavelengths by turning them into an electrical signal. These signals are then transferred to a processor within the camera’s main body, which turns them into a color map of different temperature values using algorithms. It is this chart that

Many varieties of thermal imaging cameras, like any other point-and-click digital camera, will also offer a conventional photography mode that operates with the visible light spectrum. This enables a simple comparison of two identical photos – one in IR and one in normal mode – to assist in swiftly identifying particular issue areas once the user moves away from the lens.

Why are thermal imaging cameras more effective at night?

Thermal imaging cameras perform better at night, but this has nothing to do with whether the surroundings are light or dark. Rather, since the ambient temperature – and, more crucially, the core temperature of otherwise unheated things and settings – is almost always much lower at night than during daylight hours, thermal imaging sensors may reveal warm areas with greater contrast.

Even on comparatively chilly days, heat energy from the sun is progressively absorbed by buildings, roads, plants, construction materials, and other structures when it is daylight outside. And, when the ambient temperature rises throughout the day, these types of items become less recognizable from one another.

For the same reason, most thermal imaging cameras will show heated things in better contrast after many hours of darkness rather than shortly after the sun sets – and, even during full daylight hours, they will typically be more effective in the early morning than the middle of the afternoon. To understand more about thermal optics one can go for the AGM Global Vision online site.

Do thermal cameras have the ability to see through glass?

You might be shocked to hear that thermal imaging cameras do not often operate through the glass.

From a physics viewpoint, a detailed explanation of the technical reasons behind this would be relatively difficult, but the notion is fairly simple. In essence, a sheet of glass enables visible light to pass through while acting as a mirror for infrared wavelengths (this is why the lenses on IR cameras are commonly made from germanium or zinc selenide, not glass).

If you pointed a thermal detection camera towards a window, what you see onscreen would most likely be a hazy jumble – and maybe a vague reflection of yourself holding the camera. Certain infrared wavelengths can flow through glass, and different types and layouts of glass may enable differing degrees of infrared to pass through. Car windscreens, for example, produce greater outcomes than typical domestic windows. In most circumstances, however, the picture will be heavily obscured by infrared reflection from the ‘wrong’ side of the glass, which will be layered in varying degrees of opacity. At the absolute least, the item under consideration will be devoid of considerable detail and contrast. To summarise, you should not use a thermal imaging camera to obtain reliable readings through glass (or various other types of highly reflective surfaces)

READ  Do activists have the higher hand versus US pipelines? | US & Canada

Night vision binoculars are now widely used for wildlife photography, animal tracking, and environmental monitoring. In the presence of night-time or otherwise difficult-to-spot species, infrared cameras coupled with smart sensors can be set up and left unattended in natural environments, automatically triggering. This allows for significantly more in-depth monitoring of species and behaviors in some areas than was previously allowed. Furthermore, hobbyist spotters and trackers commonly rely on thermal sensing to aid identify warm-blooded animals in poor visibility, to avoid visual camouflage circumstances, or to be alert of non-targets in hunting or development regions that might otherwise be dangerous.