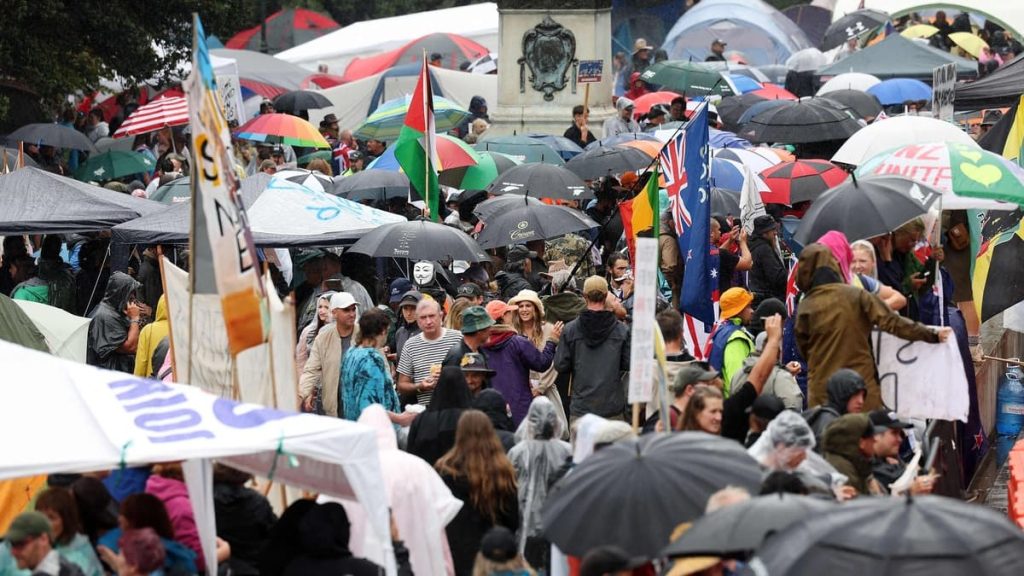 Hurricane Dovey, which caused power cuts, landslides and evacuations across New Zealand on Sunday, did not deter anti-vaccine protesters who had camped outside Parliament for six days.

Hundreds of people, inspired by the anti-health sanctions convoy of Canadian truckers, danced in the mud to the music intended to disperse them.

Deputy Prime Minister Grant Robertson acknowledged on television that every New Zealander had the right to protest peacefully, but said that the protesters had “exceeded that right”.

“I am very perplexed by the rhetoric of this protest … there is something sad about it, the element of conspiracy theory is that people got themselves,” he lamented.

Just as Canadian truckers are freezing the capital Ottawa, New Zealand protesters are protesting the government’s crackdown on anti-Kovid and demanding an end to the vaccination needed for people working in certain sectors, such as health.

Their determination seems to have been strengthened by the arrest of 122 people by police intervention on Thursday.

Since then the police have stopped making arrests and the authorities have been trying to discourage them by operating automatic‌ sprinklers.

However, before Hurricane Dovey landed, it became a vast expanse of lawn around Parliament.

The Superintendent Scott Fraser said that the police continue to explore the options ‘problem’, but the Parliament Speaker Trevor Mallard was playing music, including ‘Makarena’ and government COVID-19 messages to protesters.

The latter responded by broadcasting their favorite songs.

On Twitter, singer James Blunt offered his services to police: “Let me know if this doesn’t work”.

Meanwhile, police were urging people to stay away from unnecessary trips as winds of up to 130km / h were blowing in Wellington and other parts of the archipelago. Many roads were closed due to landslides. North of Wellington, houses were vacated.

There were power outages in many areas and firefighters responded to trees falling on houses and power lines, roofs being torn down and flooding.