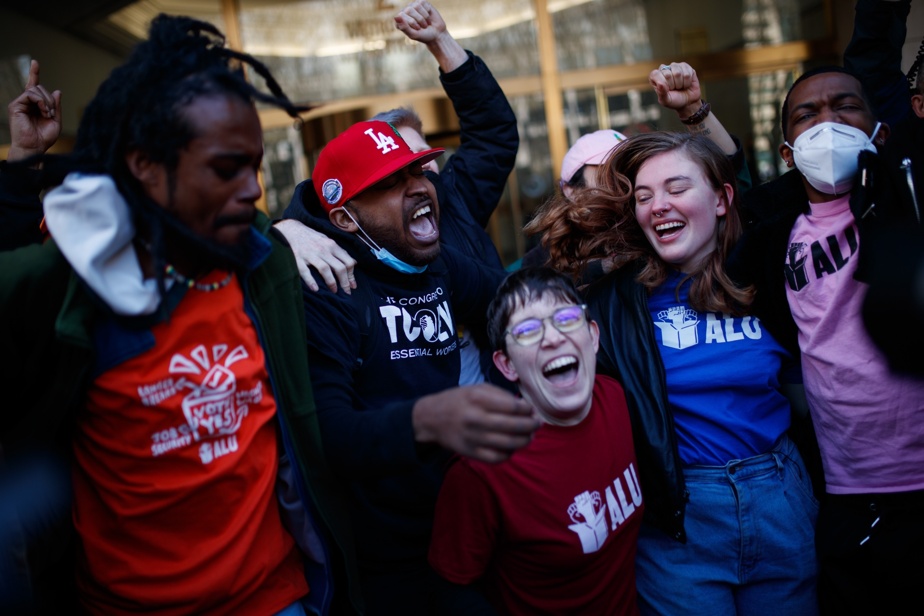 (New York) A small group of motivated activists became one of the largest multinational companies: Amazon warehouse workers in New York voted in favor of forming a union for the first time in the United States.

“Yes” won by 2,654 votes to 2,131, according to a poll released online Friday. The US president himself hailed the victory and said he was happy to hear from employees.

When the results were announced, an AFP journalist said there was applause from a small crowd gathered at the bottom of a building in the Brooklyn district where the counting took place. Many were still shocked to see their success.

The union name of the Amazon Labor Union is “ALU,” chanted several times. Its president, Christian Smalls, opened a bottle of champagne.

Before the press, he sarcastically thanked Amazon founder Jeff Bezos for going into space, because while he was there, we were able to form a union.

The company expressed “disappointment” at its partnership in a press release and said it would “evaluate its options”. Amazon is considering filing a challenge against the “undue influence” of the agency responsible for overseeing the election (NLRB).

The second largest employer in the United States after distribution giant Wal-Mart, the group has been successful in thwarting the desire of group-seeking employees to return to the country since its founding in 1994.

“This is a truly historic day,” said ALU lawyer Eric Milner. “I think it could trigger a chain reaction from one warehouse to another.”

A total of 8,325 workers are on the voters’ list at the JFK8 site in the vicinity of Staten Island. As many as 4,852 employees slipped their ballots into the ballot box during a call to vote from March 25 to 30 in a tent set up in front of the warehouse.

She was not very optimistic before the vote, as the current law on trade unions is particularly favorable to employers.

And the ALU, created by a small group of current and former Amazon employees in New York last spring, has very few avenues against Behemoth, which earned more than $ 30 billion in 2021.

“We may have spent a total of $ 120,000,” said Madeline Wesley, an ALU member who raised money through crowdfunding campaigns or T-shirt sales.

The company, for its part, hired specialized consultants and summoned employees to several mandatory meetings to provide them with the union’s disadvantages.

Neil Saunders, a distribution specialist at GlobalData, said, “It’s not going to cost them much money.” But they do not want the union to interfere. ⁇

The movement began at the beginning of the epidemic, when some warehouse workers staged a small demonstration demanding more health care against COVID-19. Christian Smalls was immediately fired.

They decided to test their luck on their own after being rejected by an experienced labor union in the spring of 2021 at the Amazon warehouse in Bessemer‌, Alabama. Recently there was a second vote and on Thursday evening, the “no” came into the lead with 993 ballots against 875 “yes”. But there are 416 remaining so-called “controversial” ballots, which will determine the outcome.

ALU is already mobilized for its next battle: the LDJ5 sorting center across the street from the JFK8 warehouse. Voting will take place later this month.

“I’m sure we’ll win there too,” said Christian Smalls, who has been serving two buildings at the bus stop for the past eleven months.

After several decades of decline, beginning with the clear support of Joe Biden, the unions have achieved many symbolic successes in the United States in recent months.

The creation of the first union at Starbucks Coffee, which is directly operated by Chain in the United States in December, sparked enthusiasm, but mobilized among employees, often young people and academics, NGOs, universities, museums, and the media.

But Amazon, “it’s a different scale,” said Ruth Milkman, a labor sociologist at CUNY University, who said she was “surprised” and “impressed” by what ALU was able to do despite the limited means.

“I don’t know if it will cause a rift, but despite all the obstacles it will definitely inspire others to see that it is possible. ⁇