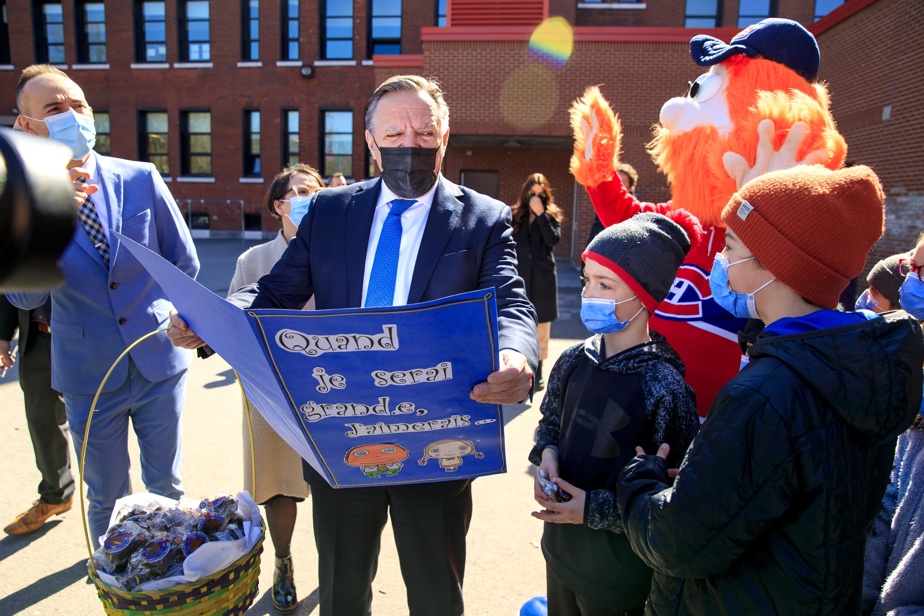 Freshly renovated elementary school children in Hochelaga-Maisonnew received a visit from the Prime Minister on Monday morning where they were given the opportunity to see UP and eat chocolate. Although Franకోois Legalt agreed that most children in the metropolis were in schools that offered “unacceptable conditions.”

Franకోois Legalt is visiting the Saint-Nom-de-Jésus school on Monday, but before handing out chocolates to students, he meets with the president of the Alliance des Profess de Montreal, who represents teachers at the school service center from Montreal.

Catherine Beauveis-Saint-Pierre described the meeting as “surprising.” The school where the meeting took place was “part of 10% of the schools [de Montréal] Are in acceptable condition. CSSDM ensures that 90% of its schools are in poor condition.

“The Prime Minister thought that 50% of our schools were in a state of disrepair,” she said.Me Beauveis Saint-Pierre, The Prime Minister’s lack of this knowledge illustrates the “gap” between reality and the politician’s realistic understanding.

In front of reporters, Franకోois Legalt noted that “there is work to be done toward education.”

“I agree that most schools, especially in Montreal, offer unacceptable conditions. We’re talking about 50% of schools that are not up to standard,” said Franకోois Legalt.

According to the 2022-2032 Quebec Infrastructure Plan, 59% of school buildings are in poor or very poor condition. One year ago, the ratio was 56%.

The Prime Minister said that the legacy of the last Liberal government was responsible for the plight of schools. He also explained that it would be more difficult to upgrade buildings due to shortage of manpower in the construction sector. “We are in the process of catching up […]We are leaving as soon as possible, “said Mr. Legalt.

The Prime Minister agreed that hiring many unqualified teachers in school daycare services was not “ideal”. Press Quebec revealed Monday morning that it has no plans to train these educators, who often spend many hours a day with children.

“We are in a situation where there is a shortage of faculty, so we have to accept for a while that some faculty do not have all the training. This is not an ideal, it is not what we want, but there is no other long-term solution, ”said Franకోois Legalt.

Franకోois Legalt was in Hochelaga-Mysannev to distribute chocolates and hockey cards to students. Yuppy made his first entrance into the gym of the Saint-Nom-de-Jesus school, where a few dozen young people were waiting for the Prime Minister.

“This is Mr. Legalt!” Cried a little excited2And The year the Canadians saw Muscat. “No, he’s not Mr. Legalt,” his friend objected.

The Prime Minister finally made his entrance, the young people listened to the song prepared for him, distributed Easter chocolates, and asked questions on the fly. “Can you name some Canadian players for me? Asked some students. His passion for hockey is unmatched by anyone. “Messi? “, A young man came forward.

“It’s a fun part of my job, coming to chat with children,” the prime minister told reporters shortly afterwards.

Charles, a sixth-grader, however, was disappointed by the minutes-long meeting with the Prime Minister. “Is there systemic racism? “, He asked Franకోois Legalt.

“He told me that there really is no one, that it is a system. It’s not the same thing. There is systemic racism, he does not want to accept it,” the 11-year-old boy concluded.