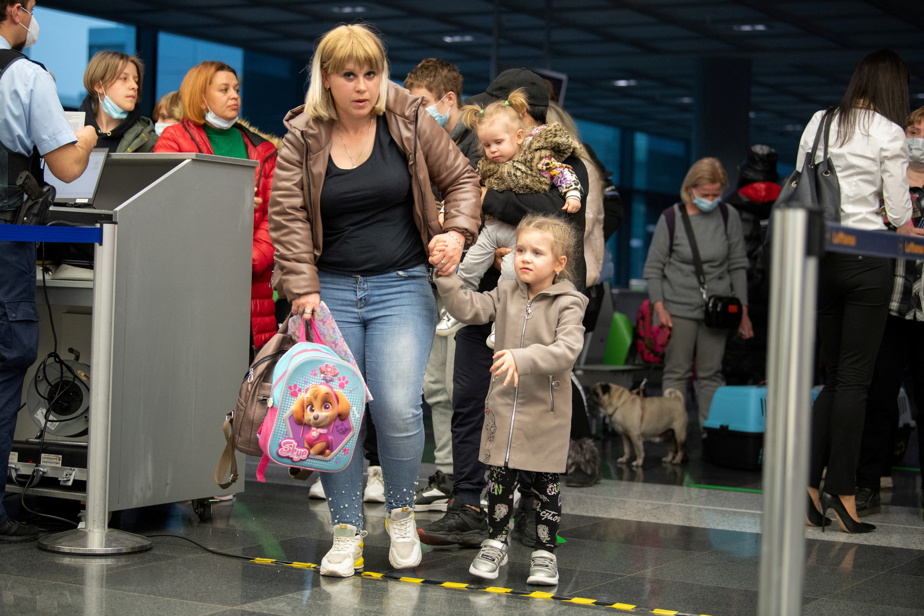 (Ottawa) The first commercial flights to be provided free of charge to Ukrainians through airplane points and cash fundraising announced by the federal government almost a month ago will not be available until June.

Launched in partnership with Air Canada and NGOs, the initiative aims to fund the airlift of about 10,000 people who fled the Russian invasion of Ukraine.

At the time of the announcement on April 20, the logistics company Miles4Migrants predicted that flights would begin by May. The company now expects the same to happen in a few weeks, as it is not ready to give a kick-off to the program.

“We are on track to launch the program in early June, which is only a very short delay. […] We do this to ensure that the process at the executive level is designed to be successful, “said Andy Friedman, co-founder and board member of the US-based company in an interview with The Canadian Press United.

Once the program launches, Miles4Migrants expects the first flights to be available in mid-June.

Mr Friedman said the funds already raised were ready to be used to book flights, but the company would have to finalize its program details before providing direct support to Ukrainians with its partners. Ongoing coordination work with other non-profit organizations, as well as the government, for example, suggests that registered individuals are actually eligible and that Ukrainians need to resort to them if their flight is canceled. And they will be given appropriate support upon arrival.

“We do not want to start a program where it does not have all these elements,” Friedman said.

He said Miles4Migrants, which aims to use point donations to provide free air travel for refugees, has previously worked with Canadian non-profit organizations and collaborated with the US government on resettlement efforts for Afghans.

According to the Air Canada webpage, the collection of airplane points launched jointly with the Canadian government has so far raised over 144 million points.

The airline said it also had a donation of 100 million points, which was announced on April 20. “Air Canada is a character donor […]. The implementation of this program, as well as all the logistics that come with it, is the responsibility of Miles 4 Migrant and the government, ”one wrote in an email.

Asked to specify how many trips could be funded with the funds raised so far, Air Canada did not answer the question.

The Shapiro Foundation, part of the partnership, has pledged to match donations of up to 50 million points for airplane points. Cash donations are also collected through the Jewish Foundation of Greater Toronto.

When asked about Canada’s role in immigration, refugees and citizenship in the Miles 4 Migrants-led initiative, Minister Sean Fraser, who is in charge of the ministry, replied that it helps assist Ukrainian citizens in compiling the necessary documentation on the ground. Approved the Canada-Ukraine Emergency Travel Authorization (AVUCU) Program.

AVUCU provides access to three years of temporary residence for Ukrainians and their immediate family members, and according to the latest data released by Ottawa, 104,553 people have been approved.

Minister Fraser, who was not available for interview this week according to his office, has repeatedly stated publicly that many people are requesting without knowing whether to use AVUCU or stay close to Ukraine elsewhere.

The ministry argued that the partnership with Miles4Migrants would be a “complement” to the charter flights provided by the Canadian government to some AVUCU recipients, calling it a “two-pronged” approach.

Three charter flights have been announced so far. A spokesman for Mr Fraser’s team said the event, which will take place on May 23, May 29 and June 2, would only allow about 300 people to climb at a time.

“Already, Canada is not the most effective on the ground and here we find a kind of public-private solution […] There are still a lot of questions and we do not have time to ask these questions, “he said in an interview.

Bloc Québécois has the same request for additional charter flights. His immigration spokesman, Alexis-Brunelle Duceppe, said he felt the government had tried to “buy time” by announcing a fundraiser and was “doing absolutely nothing” to reduce the transportation burden.

“They are taking credit for a program that has no role and on top of that that program is still not running,” he said.

In a written statement, Conservative immigration critic Jasraj Singh Hallan suggested that Ottawa should anticipate its implementation time when announcing the partnership. “When the government makes statements, there should be definite actions and gestures along with them, not good words,” he argued.

READ  The gap between the two worlds

In this regard, the office of Minister Fraser argued, “The fact that sometimes things take longer to handle should not be prevented. [le gouvernement] It needs to be clear to the people about what it is doing. ”

In addition, the Conservatives and the Black and New Democrats reiterated their demand for the lifting of all visa requirements for Ukrainians.