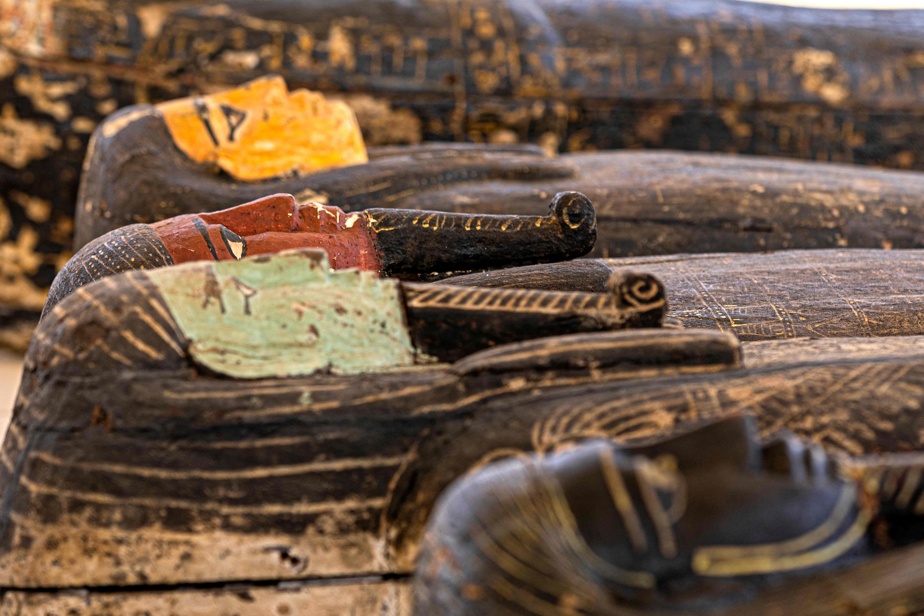 (Cairo) Egypt on Monday unveiled a casket containing 250 sarcophagi and 150 bronze statues in the Sugar Necropolis south of Cairo, the latest in a series of landmark discoveries in the region.

Sacramento, 15 km south of the famous Pyramids of the Giza Plateau, is a UNESCO World Heritage Site and the famous Step Pyramid of the Pharaoh Joser.

Built in 2700 BC by the architect Imhotep, this monument is considered to be the oldest on the surface of the globe.

Among the 150 statues found in Kash‌ are the architect, the vizier and the doctor. Freestone architect, Imhotep – considered “revolutionary architecture” in the ancient world, Mostafa Waziri, director of the Supreme Council of Antiquities in the Ancient World, told reporters on Monday.

“Finding the Imhotep tomb” is one of the main goals of the Archaeological Mission, which has already carried out four seasons of excavations at the site, Vaziri added.

In addition to the Imhotep statue, other bronze bronze statues representing the Egyptian deities “Osiris, Isis, Hathor, Amun-Min, Nefertam and Anubis” have been unearthed, according to a report by the Ministry of Tourism and Antiquities.

And “250 wooden sarcophagi containing mummies” from the 5th century BC, Mr. Waziri added.

In one of them, the “scattered” and “sealed” papyrus discovered by archaeologists was immediately transferred to the laboratory of the Egyptian Museum in Tahrir Square, Cairo, for analysis and analysis. It is estimated to be nine meters long and, according to the director, will definitely contain chapters from the Book of the Dead.

Sarkofagi will be moved to the new “Grand Egyptian Museum” near the Giza Plateau, which Egyptian officials expect to open later this year after several delays.

In January 2021, Egypt unveiled new archeological “treasures” in Saqqara, including the nearly fifty-new Kingdom of Sarkofagi, more than 3,000 years old, promising to allow authorities to “rewrite history” from this period.

Cairo is counting on these new innovations to revive tourism severely damaged by COVID-19. The sector, which employs two million people and produces more than 10% of GDP, has halved since the Arab Spring in 2011.