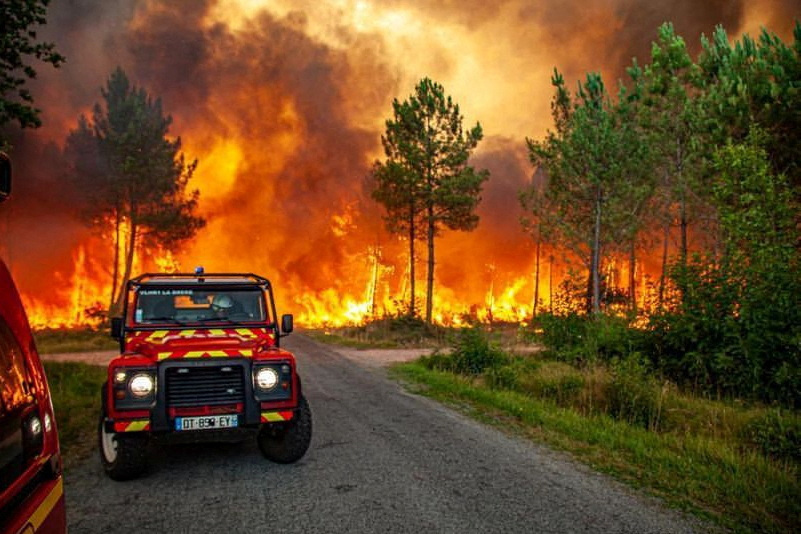 (LISBON) Parts of Western Europe continued to battle devastating wildfires on Saturday as a result of a heat wave that forecasters said could break several temperature records early next week.

In southwestern France, the mobilization of firefighters to tackle the blazes did not weaken on Saturday, particularly in the Gironde, where almost 10,000 hectares of forest have been smoldering since Tuesday, as temperatures could reach a normal heat wave. 40°C locally according to Meteo-France.

In the tourist catchment of Arcachon, on the edge of the Atlantic Ocean, efforts have slowed the fire’s progress. “We are still there and it is satisfactory, 3150 hectares have burned, but the fire is not yet under control”, the state spokesman announced to the press, welcoming the “enormous intensity and mobilization” of the firefighters.

There have been recoveries in recent hours towards nearby beaches.

More than 12,000 people have been evacuated since Tuesday as the blaze mobilizes more than a thousand firefighters.

Tranquility in the Iberian Peninsula

Portugal is enjoying relative calm, with only one major fire in the north of the country on Saturday.

“We are planning to control these fires during the day,” said Civil Protection Commander Andre Fernandez.

AFP journalists on the spot witnessed the fire appear to have subsided by early afternoon. If a wooded hill clear of white smoke is not accessible to firefighters, the action of a firefighting helicopter can be conducted at this stage to limit the progress of the fire.

Earlier in the day, a water bomber plane fighting wildfires in the Garda (north) area crashed, killing the pilot, the only person on board.

According to a report from the Portuguese Civil Protection, last week’s fires killed two and injured sixty. According to his estimates, these fires have destroyed between 12,000 and 15,000 hectares of forest and brush since the start of the heat wave.

In Spain, dozens of fires are still raging across the country from north to south. In the Extremadura region, on the border with Portugal, a section of the A5 motorway, linking Madrid with the Portuguese border, will reopen to traffic after being closed for more than twelve hours due to the inferno.

Farther south, in Andalusia, a fire near Malaga has forced the evacuation of more than 3,000 people, according to Andalusian emergency services.

In Greece, firefighters continued to battle an outbreak that broke out Friday morning, preventing seven villages in the countryside of Rethymno prefecture on the island of Crete.

The Spanish Meteorological Agency put virtually the entire country under different high temperature warning levels on Saturday, with values ​​exceeding 40 ºC in many areas and up to 44 ºC in places.

READ  Pixel 5 First Impressions: 5 Things We Hope You Like [Video]

In Portugal, only the southern Algarve region is not on heat alert. In the rest of the country, the weather agency has forecast temperatures of up to 42°C on Saturday.

Further north in Europe, in the UK, a crisis committee of British government ministers is due to meet on Saturday after the National Weather Service issued its first ever ‘red’ alert for extreme heat, “risking life”.

The Met Office said temperatures in southern England could reach 40C for the first time on Monday or Tuesday, breaking the record high of 38.7C from 2019.

London Mayor Sadiq Khan has advised Londoners to only use public transport these days when “absolutely necessary”. Railway companies have also asked passengers to avoid travel.

Parents have been told some schools in the south of England will be closed from early next week.

This heat wave is the second in just one month in Europe. Multiplication of these phenomena is a direct consequence of global warming, according to scientists, as greenhouse gas emissions increase in intensity, duration and frequency.