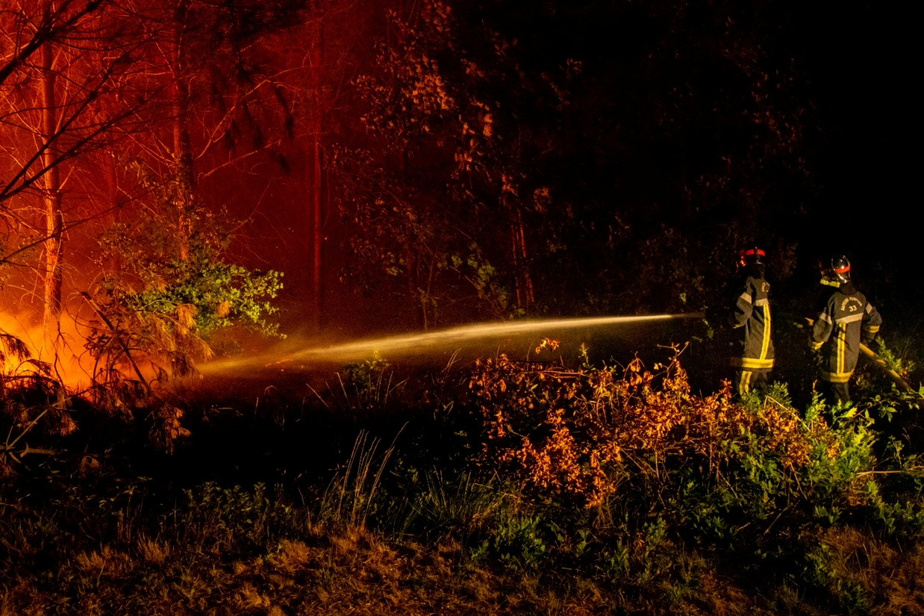 (Madrid) A heat wave is causing devastating wildfires in Western Europe on Sunday and is expected to continue into the early week, where it could break several temperature records in France and Great Britain.

The heat wave is the second in just one month in Europe. Multiplication of these phenomena is a direct consequence of global warming, according to scientists, as greenhouse gas emissions increase in intensity, duration and frequency.

In France, Greece, Portugal and Spain, fires have burned thousands of hectares, forced thousands of residents and tourists from their homes and killed several members of the emergency services last week fighting the blazes.

Fires intensified Sunday evening in France’s Gironde, where a “heat apocalypse” was predicted Monday on the Western Front, where 15 departments are on “red alert” heat wave.

Its peak is 45e The worst heat wave in France since 1947 is expected on Monday, with “strings of records” especially in Brittany and the Landes, Météo France said at a press conference.

In the Gironde, the fires returned in the evening: in total since Tuesday, 13,000 hectares of vegetation have burned and 2,100 people have been evacuated in the town of Cabanac-et-Villagrains in the Landiras sector, the prefecture said.

The new precautionary evacuations bring to 16,200 the number of holidaymakers who have had to urgently pack their bags since Tuesday, according to firefighters.

At the Teste-de-Buch, “The situation is deteriorating. The fire has reached the sea and is moving towards the south. “, according to a tweet from the prefecture, which called for “extreme caution”.

“Huge resources are being deployed in this sector. However, the flames should not reach the Landes department because the wind should turn to the west and north,” Lt. Col. Arnaud Mendoux told AFP.

READ  The Vatican judges the "Lady of the Cardinal"

In a press release, the Interior Ministry announced reinforcements “as of this evening, three additional aircraft” to support the six bombers already engaged, as well as “200 additional firefighters.” […] with 11 heavy trucks”.

In the afternoon, the civil aviation pilots’ union asked for more planes and available crew: “At the time I speak to you, we don’t have the planes we need,” national spokesman Christophe Govillot told AFP. Union of Civil Aeronautics Flight Crew (SNPNAC).

The inferno isn’t over on the western front, with the heatwave set to hit its peak on Monday afternoon.

51 departments are also under orange vigilance (which means “be very alert”) and the rest of France – except Corse-du-Sud – is under yellow (“be alert”).

Monday could be one of the hottest on record in France. “In some parts of the southwest, it will be a heat apocalypse,” François Gourand, a forecaster at Météo France, told AFP.

“Tomorrow many records are predicted: in Brittany, maybe up to 40°C in Brest”, an absolute record, but also in the Landes “the Landes Forest will be above 42°C and maybe up to 44°C,” said forecaster Oliver during a press briefing. Proust said.

The night from Monday to Tuesday will burn red in all departments: “We are going to have a really hot night”, minimum temperatures will not fall below 25 or 26 ° C during the cool night, at- he adds.

At 6 a.m. Tuesday, the red alert should be lifted as heat flows back east from the Atlantic. However, strong heat is expected to continue in the southeast.

According to Prev’air, a national air quality monitoring platform, pollution peaks can be predicted due to the heat, especially from Brittany to Provence-Alpes-Côte d’Azur.

Everywhere, the heat aggravates the risk of fire: in Loire-Atlantique, a “violent fire of vegetation” started on Sunday in Montrelois: “The fire burned 35 hectares of pine forest between the A11 motorway and the Loire” and “must be circumnavigated in the evening”, according to the prefecture. As a precaution, “to the burned area Some residents living in nearby hamlets have been evacuated”.

In Spain, about 20 wildfires are still raging and out of control in different parts of the country, from the south to the northwest in Galicia, which has so far destroyed 4,400 hectares of vegetation this week. Officers.

In the south, fires that broke out Friday in the Mijas mountains near the coastal city of Malaga were brought under control by Sunday evening, Andalusian President Juan Manuel Moreno said.

According to local authorities, the fire destroyed nearly 2,000 hectares and prompted the evacuation of more than 3,000 residents, but 2,000 have since been able to return to their homes and, according to Mr. Moreno, more are likely to follow.

A 50-year-old man died Sunday of heatstroke while walking down the street in Torrejon de Ardoz, near Madrid, according to emergency services. When paramedics arrived, the man was in “cardiorespiratory arrest” with a body temperature of 40°C. A 60-year-old road worker in Madrid died of heat stroke the day before.

Portugal experiences calm: For the first time since July 8, temperatures did not exceed 40 degrees on Sunday, after reaching a historic record of 47 on Thursday, according to the National Meteorological Service (IPMA). °C. .

Calm on the fire front, too: A major focus near Chaves in the north of the country is active and more than 90% of its perimeter is considered “virtually under control,” according to Portuguese Civil Protection.

However, almost all Portuguese territory has a “maximum”, “very high” or “high” risk of fires on Sunday, especially in the central and northern regions.

According to the latest known report from Portuguese authorities, last week’s fires killed two and injured sixty. They have destroyed 12,000 to 15,000 hectares of forest and brush since the heat wave began.

In the north of Europe, in the UK, the National Weather Service issued the first ever ‘red’ alert for extreme heat, warning of a ‘danger to life’. Temperatures could reach 40 degrees for the first time in southern England on Monday or Tuesday, the Met Office said.

Resigned Prime Minister Boris Johnson accused the British government of not taking the heat wave seriously on Sunday after missing a crisis meeting in Downing Street, and his deputy Dominic Raab was seen rejoicing over 40 degrees for the first time. England.

In the Netherlands, the Netherlands Institute for Public Health and Environment (RIVM) announced a national heat plan and smog alert on Sunday, in effect across the country from Monday, with temperatures expected to rise to 35 degrees in the next few days. Temperatures up to 38 degrees were recorded in some places on Monday and Tuesday in the south.

In other parts of the world, extreme temperatures have also fueled wildfires, notably in northern Morocco where one person died and half of the 4,660 hectares affected were engulfed in smoke, and in western Canada.