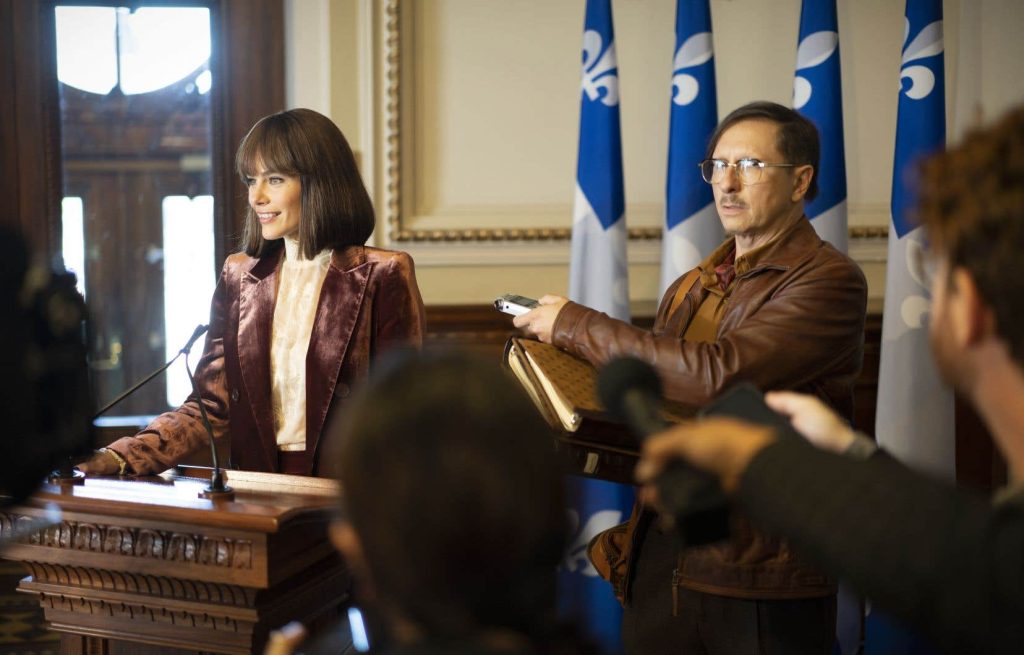 In a key scene of the movie Arlette, Mariloupe Wolff’s third feature film, Maripier Morin is photographed on a throne with a scepter in hand, decked out in a glittering corset, panties, collar and royal blue cape. The image on the front page of the news magazine is titled – “La culture, c’est moi”, a reference to the apocryphal phrase attributed to Louis XIV “l’Etat, c’est moi”.

This anecdote alone can sum up what the filmmakers tried to create: satire with referential images, where social criticism is enhanced by good scholarship and textual content, all without losing sight of an audience eager for laughter and entertainment.

It must be said that they have worked hard to dig themselves out of the precipice, for ambition is vast and full of pitfalls.

Arlette Saint-Amour (Maripier Morin), the designer and director of a fashion magazine, is approached by the Premier of Quebec to restore his government’s image. Overturned like a pawn on a chessboard, she finds herself a minister of culture overnight – “a minister of nothing”, we like to remind her in the National Assembly.

This is without counting the courage and determination of the young woman. In a few months, thanks to her appearance and her outspokenness, she was able to create a real excitement around culture, regardless of the enormous power of his colleague from the budget, neoliberal beliefs and finance, to promote artists and books. A merciless struggle begins between two visions of the world, two personalities and two generations – a struggle dictated by the image’s power and ability to take blows.

Exposing the absurdities that reign in the political world, the premise does not take half measures to showcase the challenges and prejudices a woman faces in a male environment. The Boys’ clubs, sexism, misogyny, the burden of beauty, neoliberalism, zero deficit, elite corruption and the hypocrisy of artists are all touched upon at some point. The reflections, while interesting, deserve to be dug deeper.

Filmed in the corridors of the National Assembly, the film tries to adapt the surface to better feed it, especially by multiplying parallels between the political universe of Quebec and the Palace of Versailles or, incidentally, the court of Buckingham.

Baroque, expressive and rich arias by Vivaldi, Bach and others open the scene; They were crowned – somewhat like Bridgerton, the hit Netflix series — with the brooding and haunting voice of Gilbert Cicotte. The sets and costumes are sumptuous. The camera lingers on gargantuan murals, multiplies vertiginous wide shots, and takes advantage of subdued lighting to make the place sublime, though it doesn’t entirely succeed in making people forget the austerity of the Blue Room.

The story also strives to avoid the pitfalls of caricature in order to provide substance and interiority that allows people to identify with (or at least participate in) the characters’ quest. Even the heroine only has a few scenes here and there – and not all that useful to give a glimpse of her background, her values ​​and her personal life. Satire is a film that tries to explain the chasm between a woman and a politician.

Under his direction, Marilope Wolff manages despite everything to immortalize moments of truth and highlight the talent of actors of the caliber of Paul Ahmarani, Antoine Bertrand and Benoît Brier. In the title role, Maripierre Morin steps away from the game and shows a naturalness that dazzles the woman behind the actress.

However, this removal was short-lived. After the credits rolled and the focus returned to the star, it was hard not to see Arlette’s role as a mirror image of the actress who has retreated from public life in recent years amid allegations of sexual and physical abuse. Racism – as well as society.

The production, by placing the talent of the actress before her personal story, deliberately asks the public a question: Can we separate the art from the artist? We will see the answer in the room.