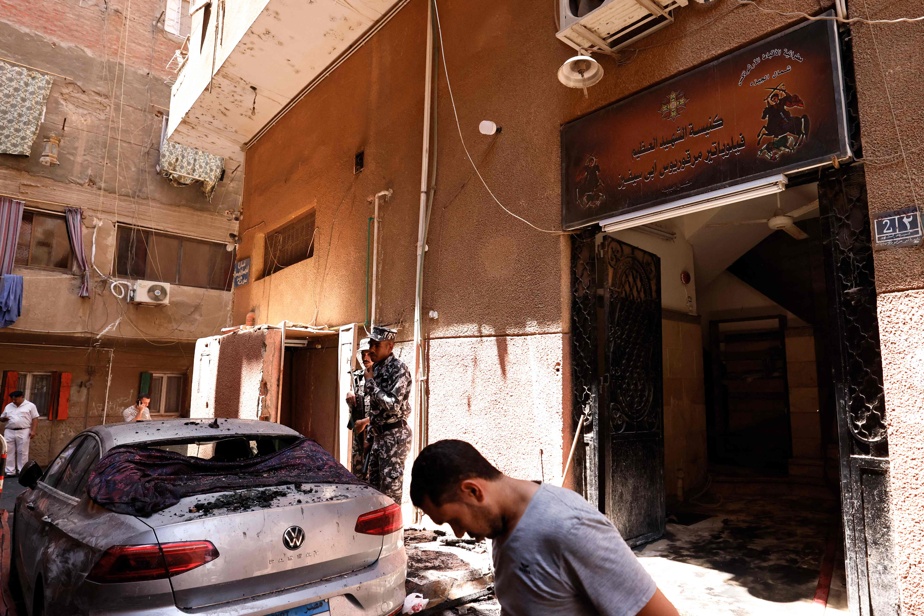 (CAIRO) A fire started by a short circuit in a church in a popular district of Cairo killed 41 people on Sunday, mourning 10 to 15 of the 103 million Egyptians in the Middle East’s largest Christian community.

“An air conditioner in a classroom on the second floor of the building where the church is located broke and released a large amount of smoke, which was the main cause of injuries and deaths,” the Ministry of Interior said.

Abu Siffin Church – named after the holy Mercury of Caesarea, revered by Copts – is tucked into a narrow alley in the working-class district of Imbaba.

One of the fire trucks active there on Sunday left a nearly street-wide blaze in the densely populated area on the left bank of the Nile.

The church is located on the ground floor of the building, separated by just a few meters of vis-a-vis, surmounted by a cross and also containing a center for social services, spotted by a photographer from AFP on the spot.

For Reda Ahmed, a neighbor of the church and a resident of the neighborhood, “neighbors organized themselves to pick up the children”.

But, he told AFP, “those who returned could no longer go back because the fire was too big”. Officials said that the fire was brought under control.

A little further, by a car piled with broken glass, debris and ash, Father Farid Fahmy, officiating at the neighboring Mar Yemina Church, said, “The fire started from the generator after a power outage. And suffered from overload”.

The prosecution announced that it had launched an investigation and sent a special team to the scene, but the Ministry of Health indicated that dozens of ambulances had been dispatched.

Because very quickly, President Abdel Fattah al-Sissi announced that he had “mobilized all state services so that all measures can be taken”.

The governorate announced that it would release around 2,500 euros in aid to the families of the dead and 500 euros to the injured.

The grand imam of Al-Azhar, Sunni Islam’s highest institution in Cairo, conveyed his condolences to Coptic Pope Tawadros II, in a press release that said “al-Azhar’s hospitals are ready to receive the wounded.”

Before him Mr Sisi called Tawadros II, an outspoken supporter of the head of state, Egypt’s first president to attend the Coptic Christmas Mass every year as his predecessors sent representatives.

Since Tawadros II took over as head of Egypt’s Christian community in 2012, the Coptic Orthodox Church has become more prominent on the political scene.

In the sprawling metropolis of Cairo, where millions of Egyptians live in informal settlements, accidental fires are not uncommon. More generally, Egypt, with its dilapidated and poorly maintained infrastructure, regularly experiences deadly fires in its various provinces.

Already on Monday, a church was engulfed in flames in Heliopolis, a wealthy district east of Cairo, with no deaths or injuries.

In March 2021, a fire at a textile factory in Cairo’s eastern suburbs killed at least 20 people. In 2020, two fires in hospitals claimed the lives of fourteen patients with Covid-19.

Although numerous, Copts consider themselves excluded from many positions in the public service and are very constrained by the more liberal legislation for the building of churches and mosques.

Mr. Sissi recently appointed a Coptic judge to head the Constitutional Court for the first time in history.