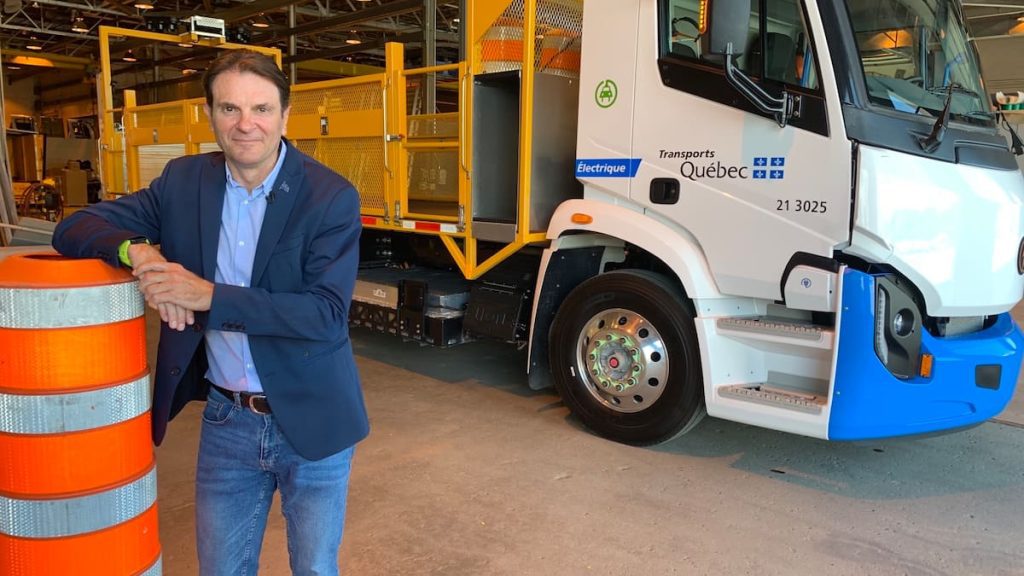 As part of a program to electrify its vehicle fleet, the Ministère des Transports du Québec (MTQ) has taken delivery of its first electric truck.

• Also Read: Sales of non-polluting vehicles are increasing in Quebec and Canada

• Also Read: Polluting vehicles: There is no question of increasing the tax burden on motorists, Legault assured

The Quebec-made drop-side truck is used by MTQ to deploy orange cones at construction sites.

The ministry signed an agreement with Lion Electric for the supply of 13 electric trucks for a total of $4.4 million.

“It’s a $335,000 vehicle, which is slightly more expensive than a conventional vehicle. We are also eligible for rebates from the federal government. We are talking about $100,000 per vehicle that the federal government will give us as part of the purchase of completely green vehicles,” emphasized Transport Minister Francois Bonnardel.

Saint-Jerome-based manufacturer Lion Electric estimates that the MTQ will achieve savings of 80% in energy costs and 60% in maintenance with its trucks, which have a range of 240 kilometers.

François Bonnardel believes the Ministry of Transport has no choice but to lead by example.

“We are investing billions of dollars in city buses as well as school buses and, today, government aircraft. We have a very ambitious goal, if not the most ambitious in North America. The government fleet has around 21,000 vehicles. We aim to electrify 12,000 of these light vehicles by 2030, so 100% of these vehicles and 9,000 other vehicles by 2040,” the minister said.

“1.6 million light vehicles will be electrified by 2030 in Quebec. 2035, 100% of vehicles sold will be green. I think that today we Quebecers have an important mission for the government fleet,” said the Minister of Transport.

The government is less than 15 years green.

MTQ needs to replace a fleet of 3,000 medium and heavy trucks and the first step is the purchase of Lion electric trucks.

The Ministry of Transport, which maintains a fleet of 45 official vehicles for ministers, has only 19 hybrids or plug-in hybrids.

“The big problem that Lion or other big companies have to solve is the autonomy of these trucks and vehicles. I am currently using a hybrid Toyota Sienna. We want to have fully electric vehicles. The offer is interesting, but not strong enough to have a range of 400, 500, 600 kilometers,” said Minister Bonardel, who was confident that manufacturers would come up with vehicles that could go longer distances without recharging.