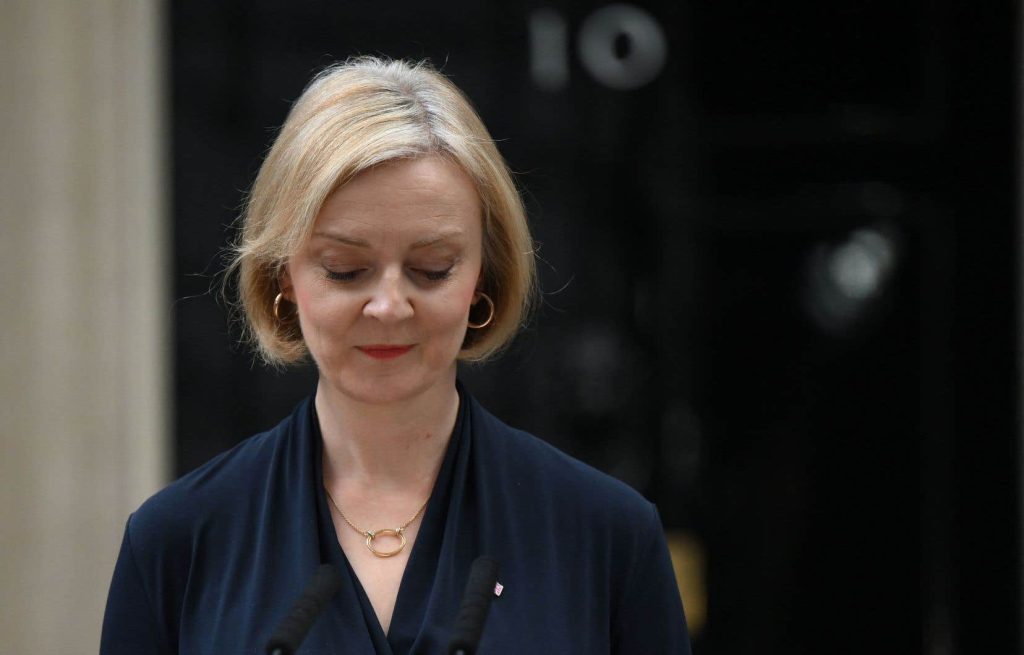 Up against the wall, British Prime Minister Liz Truss finally resigned on Thursday, after just six weeks in power in what resembled the Way of the Cross for a conservative leader whose drastic economic program has caused a political and economic crisis.

“Given the circumstances, I cannot fulfill the mandate of being elected by the Conservative Party. So I have spoken to His Majesty the King to inform him that I am resigning,” the 47-year-old leader said in a very short speech outside 10 Downing Street.

A vote to find his successor in the Conservative Party will take place “by next week”, making him the shortest-serving Prime Minister in Downing Street in modern British history, throwing in the towel and becoming Prime Minister. With only 44 days in office.

Still on Thursday morning, she appeared to be clinging to power, with a spokesman promising at midday that she was “working” with her finance minister, Jeremy Hunt, to prepare their medium-term economic plan. Day after day was a disaster for her.

But late in the morning, she met the head of the powerful 1922 committee in charge of the Conservative Party’s internal organization (and thus the possible replacement process) as the Conservative leader struggled. The majority is more and more revolted, and the list of parliamentarians calling for his departure is being extended by the hour.

“Liz Truss needs to go as soon as possible”, fired former Conservative minister David Frost, who had previously strongly backed her, at the forum. Daily Telegraph.

Not more popular than ever in public opinionWithout financial program later A humiliating abandonment of tax cuts And having to deprive herself of two of her most important ministers, Liz Truss is sure to want to replace her, her management of Downing Street seems compromised.

Amid a cost-of-living financial crisis that has seen millions of Britons hit by inflation, the Conservative Party has resumed internal elections to find a new leader – the fifth in six years – with the previous one taking place this summer. , following Boris Johnson’s resignation, amid scandals in Downing Street and the majority.

Several names have been floating around for days after Liz Truss, such as Rishi Sunak, Jeremy Hunt, Penny Mordant – the minister responsible for relations with Parliament – or Prime Minister Boris Johnson. He replaced her as minister in September.

With the Labor opposition ahead in the polls, the Tories decided to avoid early parliamentary elections.

After Liz Truss’ announcement, their leader Keir Starmer called for a general election to be called “now” and not in late 2024 or early 2025 as planned.

The Conservatives have “failed in their basic patriotic duty to free the British from their miserable strife”, he attacked in a speech before the Trades Union Congress (TUC) on Thursday morning, as many social movements in the country are concerned. The face of the cost of living crisis.

For Liz Truss, Wednesday turned into melodrama. Less than a week after the departure of Finance Minister Kwasi Kwarteng, the government’s new strongman was replaced by Jeremy Hunt, a very proper interior minister. Suella Braverman left the government due to growing disagreements According to British media, with Liz Truss on immigration.

She was replaced by Grant Shapps, a former transport minister under Boris Johnson, who was meant to be an opening to Liz Truss’ former rivals in the Downing Street race, with Shapps backing Rishi Sunak.

The incident took place in Parliament in the evening, where the government’s winning vote on lifting the moratorium on hydraulic fracturing turned into a rat race between conservatives.

A majority of MPs refused to vote on the government’s direction, clearly demanding that Downing Street respect the vote’s suggestion, as opposed to the reprisals they would expose themselves to.