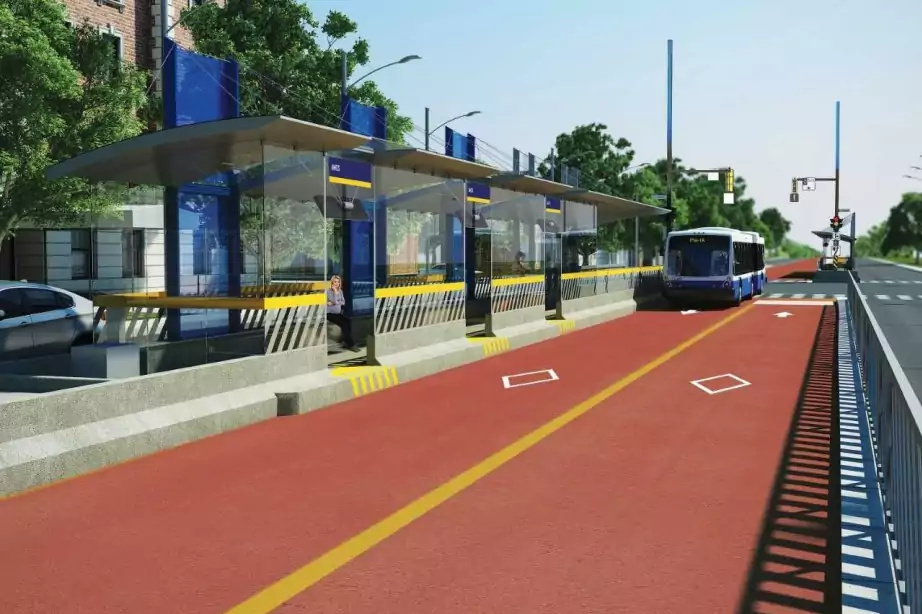 Bus Rapid Service (SRB) is finally a reality. About fifteen stations in this corridor of 11 km of reserved bus lanes will provide services from Monday. The Société de Transport de Montréal (STM) estimates that it can provide a 30% faster ride than before by bus.

“Our aim is to increase the commercial speed of buses, with stations further apart than usual. And reserved lanes in the middle are less impacted by vehicles making right turns on parallel streets,” said Mark Dionne, SRB Pie-IX Project Senior Director.

The latter is estimated to enable users to “save around 30% time” compared to the former, which is faster than a car. This corresponds to a gain of around 10 to 15 minutes compared to the 40 minutes previously taken by the trip from Henri-Bourassa metro station. The buses run on diesel. Around fifty works of art will also be installed along the route.

At the Autorité régionale de transport metropolitain (ARTM), spokesman Simon Charbonneau recalled that the SRB under construction from 2019 “will be connected to the Mascouche railway line to the north”. “We know that many users used to get down at Saav to connect with the Orange Line. Now there is a new option. This is good news for decongesting the Orange Line,” he said, inviting users to check which of the new “metropolitan fares” best suits their usage.

The unit title is “all modes AB” – for those coming from Laval to Montreal, for example – $4.50, compared to $3.50 for those living on the island. Many commuters from North Shore and South Shore are also demanding ARTM to rebalance this fare difference.

To date, an extension to rue Notre-Dame Est – which has been put on hold – is still planned. Mr. said STM could make an announcement on the matter soon. Dion confirms that, however, faced with an unsatisfactory call for tenders, the firm returned to analysis to optimize costs. Initially set at around 300 million, the SRB Pi-IX budget has suffered several cost overruns in recent years. With the addition of Notre-Dame, the bill for the project ballooned to more than $650 million.

On the spot, Hochelaga-Maisonneuve’s solidarity deputy, Alexandre Leduc, also spoke of the “significant shadow on the board” regarding the uncertainty surrounding the extension to Notre-Dame, which he saw as crucial. “We wonder if the REM de l’Est will be punished for opposing it, like Hoche. No, we want to guarantee that it will move forward quickly,” he wondered.

“A lot more is needed, obviously. […] This is just the beginning,” Mayor Valerie Plante began, however, welcoming the “significant” potential and “hope” the project would bring to the East and Northeast.

Asked if the SRB could be replicated elsewhere on the island, Transport Minister Genevieve Guilbault was cautious. “It depends on the objectives, the layout and many things. Each case has to be studied. Each corner has the same needs and does not require the same way to meet them,” she offered.

Not everything is ready on Monday. The new rapid bus service will operate only on Boulevard Saint-Martin in Laval with a 750-space incentive parking lot to Avenue Pierre-de Coubertin in Montreal. In contrast, the Jean-Talon sector, where construction of a pedestrian tunnel connecting the future Blue Line station continues, will be completed in the fall of 2023, as will the Pi-IX bridge. Both Jean-Talon and Belanger stations will have to wait until then.

READ  Democrats Have Their Doubts About Biden’s Bipartisan Bonhomie

In addition, the construction of the pedestrian tunnel, which is still in progress, will completely close the intersection of Boulevard Pi-IX and Rue Jean-Talon Est this fall.

Eventually, the SRB Pi-IX should serve east of Laval, crossing four boroughs. Connections are planned with the Metro Green Line, at Pi-IX station, as well as with the Societe de Transport de Laval (STL) and the exo5—Mascouche commuter rail line.

However, the frequency of buses using the SRB depends on construction sites in progress, including the Jean-Talon sector, but also on the responsibility of the Ministere des Transports du Québec (MTQ) at Pi-IX. and de la Concorde bridges. The city has invested 130 million in recent years to rehabilitate road infrastructure along the Pi-IX axis.

Until then the “Conversion Offer” will remain in effect. The 439 Express Pi-IX line will be the main line on the SRB corridor with “much improved” frequency and its shelters will be in the middle of the tracks. The frequency of buses on this route will also be increased in three sections: Lacordaire/Henri-Bourassa, Carrefour Henri-Bourassa/Pi-IX and Laval. Buses are expected to run regularly every four to ten minutes on weekdays. Line 139 Pi-IX schedule will be “adjusted down”, with stops at the curb. As for the night line, 355 Pi-IX, its frequency “does not change”.