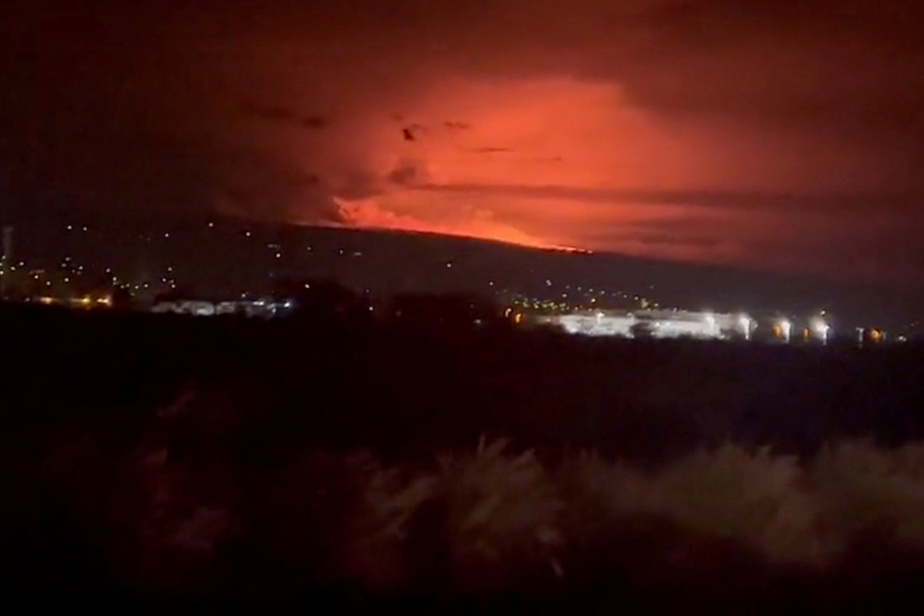 (Los Angeles) The world’s largest active volcano, Mauna Loa in Hawaii, erupted for the first time in nearly 40 years: spectacular, its fury does not threaten homes at the moment, but officials and experts urge caution.

The eruption, which began at 11:30 p.m. local time Sunday (4:30 a.m. ET Monday), is sending molten rock to the top of the volcano, according to the United States Institute of Geophysics (USGS).

It also produces thick smoke clouds over the American island of Hawaii, the largest of this Pacific archipelago. According to the USGS, the scrolls can be seen more than 70 kilometers around.

Lava that was originally inside the summit crater is now flowing through fissures on the flanks of Mauna Loa and experts are closely monitoring the situation.

Authorities have not ordered any evacuations, but the area near the summit and some roads on the island have been closed as a precaution.

“The eruption of Mauna Loa has migrated from the summit to the northeast rift zone, where fissures are feeding multiple lava flows,” the USGS said on its website.

According to the institute, there is currently no danger to homes in the area of ​​the eruption, but it warns against the instability of this volcano, which is the largest in the world – it is half of the island of Hawaii and its area exceeds all of them. Other islands in the archipelago are joined together.

“The early stages of an eruption from a Mauna Loa eruption can move quickly, and the location and progression of lava flows can change rapidly,” the USGS warned.

According to the institute, the winds also carry “volcanic gas and pele hairs,” volcanic glass fibers named after the Hawaiian fire goddess that form when lava droplets are stretched into fine filaments by storms. As sharp as razor blades, they are dangerous to skin and eyes.

The US Weather Services (NWS) warned that volcanic ash and debris could accumulate around the volcano. It can cause breathing difficulties in occupants or disrupt the operation of engines or electronic systems.

Mauna Loa, or the “Long Mountain” of Hawaii, has not erupted since 1984. It spewed lava for 22 days, producing lava flows that failed just seven kilometers from the town of Mauna Loa.

“This is a dangerous mountain that hasn’t erupted since 1984 – the longest eruption hiatus in its history – so we should all be paying attention,” Twitter volcanologist Robin George Andrews commented.

According to him, lava is flowing through newly formed fissures on the northeast flank of the volcano, indicating a “dangerous new dimension of the eruption.” But unless there is a dramatic increase in their throughput, the city of Hilo and its 44,000 people must be preserved.

Mauna Loa rises to 4169 meters and is one of six active volcanoes in the Hawaiian archipelago. It has erupted 33 times since 1843.

The main island of the archipelago is also home to a slightly higher volcano, Mauna Kea – 4207 meters.

READ  AMD has unveiled its new Gen 3 Raison 5000 processors, including the 'Best Gaming CPU in the World'.

Southeast of Mauna Loa, Kilauea Volcano has experienced fairly constant activity with almost uninterrupted eruptions between 1983 and 2019. Its latest, Minor, has been going on for several months now.