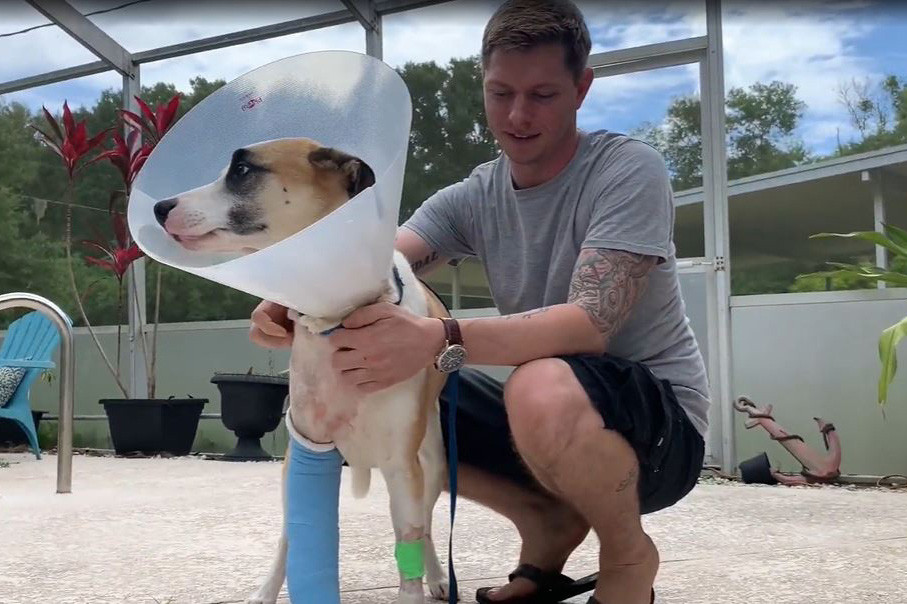 A Florida man got into a “tug-of-war” with an alligator that caught his dog and dragged him into the river, according to a news release.

As Trent Tweddle walked the 6-year-old Loki at their farm in Wesley Chapel in Pasco County on Monday morning, the rescue puppy “kept its front foot in the river” and struck a 13-foot-long gator. He told WFLA.

“I grabbed the dog’s collar to try to get behind him, and I ended up in a tug-of-war with this gator, not the gator,” he told the store. “So I got out of the collar and dived into the water at knee depth and started beating on Kater’s head until he was finally gone.”

When Tweddle escaped with minor scratches, Loki’s front leg was nearly amputated and he needed emergency surgery, the report said.

“When I pulled him back up, the bones went out. It looks like the arm was hanging off with a towel,” Tweddle told the station. “They were able to recreate it with metal plates and screws. We hope he can fully use his feet after this.”

Now, Tweddale is so determined to catch the reptile that he set up a trap with the help of the Florida Fish and Wildlife Service.

“The engineer didn’t have any bait, so I grabbed one of my services and we used him to bait the trap,” he told the store. “We haven’t had any luck so far. We love our dog so much that I fight tooth and nail for him. “

READ  Framing the self: The increase of the bookshelf aesthetic | Media