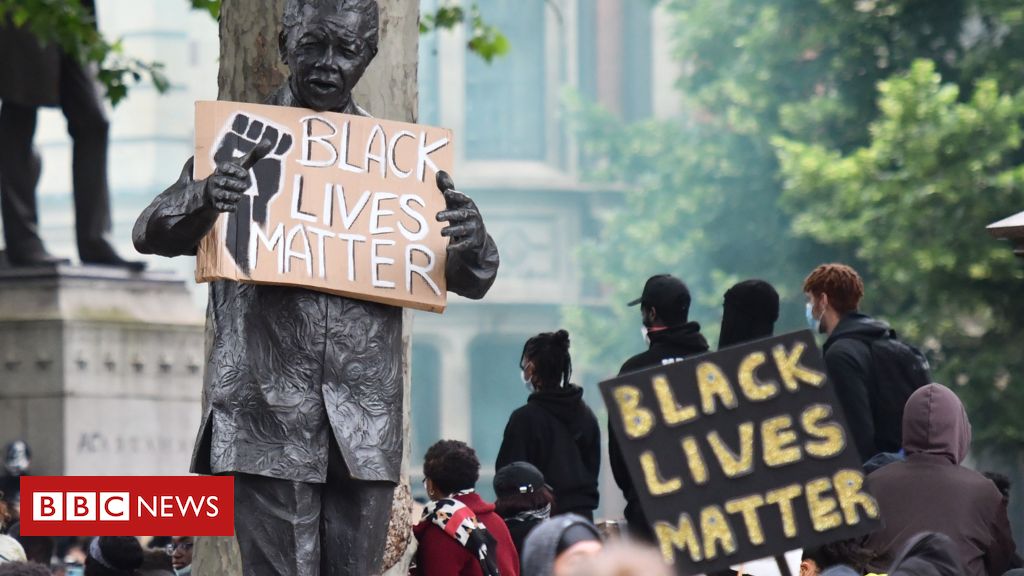 The killing of George Floyd has sparked weeks of protests in the UK and a debate about history and diversity.

Monuments to those involved in the slave trade are being scrutinised, with many calling for them to be removed.

The Mayor of London Sadiq Khan has said that, rather than simply removing statues, new monuments should be erected to commemorate the role minorities have had on British history, including the Windrush Generation and murdered schoolboy Stephen Lawrence.

How many statues are there of black individuals?

The short answer is we don’t exactly know.

Because statues are generally approved at a local level, there is no one central place for listing them.

However, the Public Monuments & Sculpture Association (PMSA) has recorded thousands of statues across England, Wales and Scotland. These are statues or sculptures publicly available (very few are on private estates) and almost all are located outside.

We looked at 968 public statues or sculptures in the database, of which 610 were identifiable as named people.

Of these, just three are of black individuals – two of Nelson Mandela and one of Desmond Tutu (although the latter is placed inside Lewisham Town Hall).

But while this list gives some insight, it is incomplete. Much of it is based on volunteer work and some newer statues will not have been added to the database.

In the past decade, there appears to have been a more concerted effort to reflect the UK’s current and historical diversity.

Using online news clippings, we found 175 named statues built since 2007 across the UK.

We also found a few other outdoor, clearly-named statues from before 2007 which are not included in the PMSA list. These include a statue in Bristol of the poet and playwright Alfred Fagon.

Historic England, a charity which manages monuments and buildings, notes that just two of its listed statues are of black individuals – a bust of Nelson Mandela in London’s South Bank and ‘Platforms Piece’ in Brixton. The latter is not included in our analysis, as the statues – created in 1986 and thought to be the first statues of black British people – are not named historical figures.

Taking all of these sources into account, we believe that there are a total of 15 outdoor statues of named black individuals in the UK.

Avril Nanton runs tours focussing on black history in London. She says she has identified more than 30 statues, busts and carvings representing black people in the city but not all of these are of named individuals.

Those which are include boxer Nicola Adams, musician Jazzie B and Spurs footballer Ledley King, who are captured in walking and cycling charity Sustran’s portrait bench project, but might not be considered traditional statues.

Mrs Nanton notes that in her experience the representation across London varies.

It says that less than 4% of the plaques are dedicated to Black and Asian people.

The charity says one of the issues in the past has been a lack of public nominations of ethnic minority figures, although they are working to improve representation. However, they added they are not aware of plaques recognising figures directly involved in the slave trade.

In Northern Ireland, the Ulster History Circle manages a similar scheme, of which one plaque commemorates Dr Ernest Grail Armattoe, a black physician.

Are there more statues of people involved in the slave trade?

Looking at the Historic England and PSMA’s listings of statues and monuments, we identified at least 15 statues of individuals who directly profited from and personally invested in the slave trade, excluding memorials in churches or graveyards.

Again, this is not a complete list, given that the databases are incomplete and some contributions to the slave trade are clearer than others. Many others will have profited from or supported the trade in other ways.

For example, prime minister William Gladstone has at least six statues. He was the son of a slave owner and helped his father secure compensation when the practice was abolished. The great-great-grandson of William Gladstone has said he will not oppose removing a statue of the statesman from the family’s home village.

But while there are statues of individuals who supported slavery, there are also ones of people – often the contemporaries of those profiting from slavery – who vigorously condemned the practice.

In total, we found a large number of statues of individuals who campaigned against the slave trade, including Joseph Priestly and William Wilberforce.

What claims do you want BBC Reality Check to investigate? Get in touch