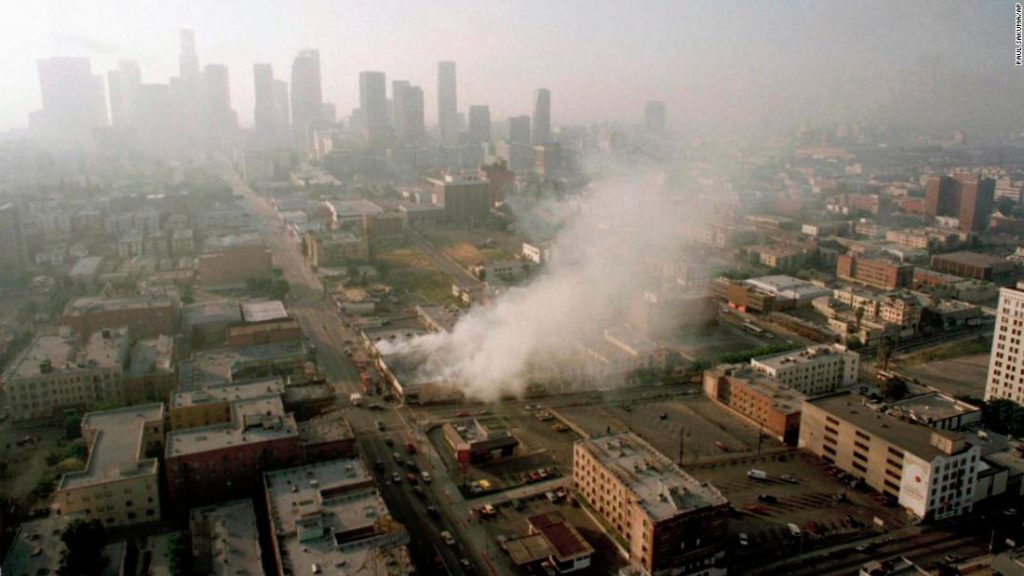 He had watched a video of four police officers brutalizing a black man pinned to the ground. The video had grabbed headlines and sparked widespread protests. Police departments vowed reform. Sure, these types of protests had happened before, he said, but this one felt different.

“The balance of the power has shifted from the police to the populace,” Donald Bakeer told me. “This is an exciting time. America is going to change.”

Bakeer said this 28 years ago. I was standing amid the smoldering ashes of Los Angeles’ South Central neighborhood in 1992, when I was a rookie newspaper reporter assigned to cover the Rodney King riots.

But the news cycle moved on, and the accounts and videos of black men brutalized by police kept coming. After all the deaths and the protests — in Ferguson, Missouri, in 2014 and in Baltimore in 2015, to name a few — came the same calls for change and the same rhetoric: This time will be different.

I’ve seen how this movie ends. I also covered the Freddie Gray riots, which erupted in the same West Baltimore neighborhood where I grew up. I’ve seen the same pattern: Exuberant protesters, vows for police reform, and then … nothing.

But after the George Floyd demonstrations I find myself filled with a guarded optimism, even as I wrestle with the fear that nothing will stop these ghoulish videos.

I see three big reasons why things really do feel different this time.

White people get it now

My optimism starts with a painful memory. It was the most heartbreaking confession I’ve ever heard from a young black man.

I was interviewing a black family in a gang-dominated neighborhood in Los Angeles not long before the King riots. They lived like moles. Everything in their house — their furniture, their mattresses — was as close to the floor as possible. A rival gang had shot into the house so much that they low-walked through the rooms. Bullet holes dotted the walls.

A member of the family, 17 at the time, said many of his friends had already been killed. He couldn’t envision reaching middle age.

Before Black Lives Matter was a hashtag, it was a question mark. I met so many black and brown people in South Central who wondered if white people cared about how much they suffered. They lived in a perpetual crossfire — terrified of gangs and the Los Angeles Police Department.

Covering gangs like the Crips and the Bloods was my first journalism job out of college. It may sound exciting, but I was miserable, and sometimes terrified. What I remember most was the isolation of those communities. People felt like they were marooned in impoverished, dangerous neighborhoods by whites who couldn’t give a damn about how many of them were murdered.

But the Floyd protests have introduced a plot twist that I didn’t see coming.

I’ve never had so many black friends and relatives call me, all saying the same thing: Did you see all of them white people out there?

We’re not just seeing Berkeley radicals at these rallies. Protests have spread to small, predominately white towns — even places like Vidor, Texas, a former Ku Klux Klan stronghold that Texas Monthly once called the “most hate-filled town” in the state. More than 70% of Americans see Floyd’s death as part of a larger racial problem, according to an ABC News/Ipsos poll.

I’ve never seen so many white people as angry about racism as its victims.

This was unthinkable during the King riots.

Many of the people I talked to in South Central perceived that much of white America saw them as animals. They thought whites were titillated by tales of gang violence and tough LAPD cops. One of my friends called it “gangster chic.” But most whites didn’t seem interested in learning about the type of racism that made some black people’s lives so miserable.

They are now. When President George W. Bush releases a statement asking, “How do we end systemic racism in our society?” something has changed.

More white people are saying what Andy Stanley, a prominent white evangelical pastor, said during a recent sermon on the Floyd protests: It’s no longer enough to be a non-racist; one must be an anti-racist.

The Floyd video was an Emmett Till moment for white America, one professor told me.

“Perhaps the tipping point of violence against black citizens has finally broken though the apathy of the dominant majority, such as Emmett Till’s open casket and the images of his brutalized face (that) finally snapped many Americans out of a delusional belief that America was great for all,” says Susan Peppers-Bates, a philosophy professor and director of the Africana Studies minor at Stetson University in Florida.

One of my friends put it best when he called me one recent night after watching white demonstrators square off against police in riot gear. He declared:

“White people get it now.”

The Floyd protesters have the perfect villain

My optimism is also based on another encounter with a young black man. This one took place five years ago in Baltimore.

The experience literally hit home for me.

I’d been sent to the city to cover the unrest over Gray, a black man who died while in police custody. The epicenter of the riots was in the same neighborhood where I grew up. National Guardsmen with assault rifles patrolled outside the house where I played with friends.

I spotted a teenager in braids leaning against a sign at a nearby bus stop. He scowled as I approached. Everyone seemed angry that day.

His name was Malik, and he told me he was angry at Baltimore’s mayor for calling young protesters “thugs.” He didn’t think any of the city’s political or law enforcement leaders cared about young black men like himself.

This wasn’t a South Central rerun. Malik was angry at black people, not white people. The city leaders he castigated were all black.

Every protest movement needs a focal point for its wrath. The civil rights movement had a racist antagonist, Alabama lawman “Bull” Connor. The #MeToo movement has movie mogul Harvey Weinstein. But the Freddie Gray protests didn’t really have that, and I think it hurt them.

I detected a palpable letdown in my old Baltimore neighborhood when people finally saw the pictures of the six police officers arrested in connection with Gray’s death. Half of them were black. The city’s police chief and mayor were black. How could protesters claim that Gray was a victim of racist cops and politicians when Baltimore was controlled by black leaders?

Police officers from previous protests faded from public view like phantoms. Many have forgotten their names.

The Floyd protesters, though, may have the perfect villain in President Trump.

Intentionally or not, he has mobilized protesters.

Many were outraged by his tweet saying, “when the looting starts, the shooting starts.” The use of smoke canisters and pepper balls to remove protesters so Trump could hold up a Bible in front of a church backfired by turning out more protesters, Washington Mayor Muriel Bowser said.

“You have a leader who is thoroughly incompetent and inept in this moment,” Bryan Adamson, a law professor at Case Western Reserve University in Ohio, told me. “He has managed to fan the flames of racism.”

Police culture won’t be the same

Another memory from 1992 Los Angeles suggests to me that this time may be different.

It’s when I met one of the most notorious police chiefs in America. His name was Daryl Gates, and he was chief of the Los Angeles Police Department during the Rodney King riots. A veteran of the US Navy, Gates helped spread the militarization of police departments around the nation.

Gates once told a US Senate committee that casual drug users “ought to be taken out and shot.” He said that more blacks died from police chokeholds because their arteries were not the same as “normal people,” a remark for which he later apologized. Under Gates’ command, the LAPD used an armored personnel carrier to bash in suspected drug houses.

Gates was forced to resign from the LAPD in 1992. But until now I have never seen so many police officers break publicly with the military culture that’s embedded in so many departments.

Police officers have knelt with and marched with protesters. Houston Police Chief Art Acevedo asked his department to provide escort services for Floyd’s body upon his return to the city for his burial.

The days of big-city police chiefs acting like Gen. George Patton may be over. The potential legal and political costs are too high.

Besides, there’s something about the Floyd video that hits at law enforcement in a way that other videos didn’t, says Adamson, the Case Western professor.

“I think many officers, especially black and brown, had to be wrecked by what they saw,” Adamson says.

The Floyd video could lead to concrete changes in police culture. Already, all four Minneapolis officers who were filmed arresting Floyd have been arrested and charged in his death. Other police departments have also taken swift recent action against officers accused of misconduct.

Politicians are getting involved. The Minneapolis City Council has pledged to defund and dismantle the city’s police department in the wake of Floyd’s death. Such steps could include everything from dismantling the structure of the city’s police force to dramatically reducing its budget.

Congressional Democrats released a package of proposed police reforms, and some local governments are banning chokeholds. Republicans, and the White House, are discussing reforms as well.

Similar reforms have been tried before, including after the Rodney King, Ferguson and Freddie Gray protests. But the movement has more momentum now.

And what if it’s still not enough?

If protesters ultimately help make policy, and not just noise, my optimism may be validated.

The US Congressman and civil rights icon John Lewis recently said something that’s crucial: “The vote is the most powerful nonviolent tool we have in a democratic society.”

A Trump victory in November, though, could derail any momentum generated by the protests, says Christopher Huff, a history professor at Beacon College in Florida who studies protest movements.

“It would be devastating,” Huff says. “If what’s happening now translates into an electoral defeat in November, that would be an indicator that what’s been going on may have lacked a grounding to effect long-term change.”

I’m familiar with this kind of disappointment. I’ve seen the hope for police reform rise and fall. I try not to return to the level of pessimism that I once felt while listening to the young man who only wanted to make a baby before he was murdered.

But now I have a new fear. What if this time really is different, but that’s still not enough to affect meaningful change?

What if I keep seeing a succession of unarmed black and brown people struck down on videos? What if one day it’s someone I know — or me?

And yet in other moments, I also believe that true change is possible. The price of police brutality is becoming too high to pay. There is a new generation of black, brown and white anti-racists who will change America.

It may not make sense to believe both. But it’s better than what I once felt: no hope at all.