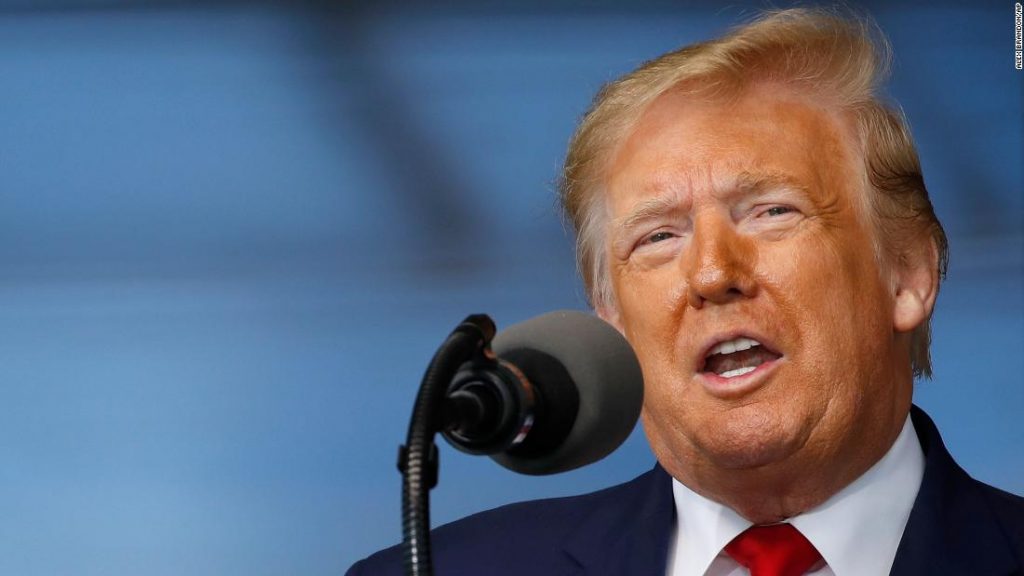 Though it is still 141 days from the November 3 election, the polls of the moment look grim for Trump. He continues to struggle with female voters, many of whom are exhausted by his divisive tone and punitive tweets. Biden is posting double-digit leads in national polls while campaigning (mostly) from his basement in the midst of the pandemic.
And Trump’s self-inflicted errors in the weeks since George Floyd’s death — from the administration’s clearing of Lafayette Square for Trump’s bible-wielding photo-op to the President’s tone-deaf assertion that he can fix systematic racism in America quickly and easily — made even some Republicans wince.

But Trump proved in 2016 that he is smarter than most people think about electoral strategy. In interviews with both Republican and Democratic strategists this past week there was near unanimity that no one can predict how an issue like racial injustice will play out in November — especially when American lives and livelihoods are on the line during a pandemic and a frightening economic collapse.

Strategists from both parties also noted that Democrats are playing a dangerous game if they believe Trump’s inflammatory tweets and threats will cost him the election (a miscalculation some Democrats made in 2016).

While the President has been widely criticized for vilifying protesters, calling on governors to dominate demonstrators in the streets and for hammering his “law and order” message, Democrats may be equally at risk of overplaying their hand as pressure mounts from activists on the left to slash police budgets or “defund the police;” as Minneapolis moves to disband its police department; and as protesters occupy the area around Seattle’s East Precinct.

“Here’s the good news for Trump, Republicans are going to be far more tolerant of police reforms than Democrats will be in terms of embracing the cops — the idea that they’re not the enemy,” said Republican Sen. Lindsey Graham of South Carolina, who chairs the Senate Judiciary Committee.

“Joe Biden’s problem is — how do you embrace law and order with a very militant base?” Graham said. Noting the controversy over disbanding police departments around the country as a counterpoint to Trump’s polling deficit among female voters, he added: “I think most people, but particularly women with kids in charge of a family, want to pick up the phone and have a cop on the other end and not a social worker.”

Trump tried to channel a similar public safety message in the lead up to the 2018 midterms when he stoked fears about “migrant caravans” that he claimed were coming across the border and endangering Americans, while promising a “law and order” response.

Whether Trump’s calls for a law-and-order approach will resonate in November remains unclear. Recent poll numbers point to the paradox of the current moment. A Pew Research Center survey released last week showed that two-thirds of US adults now say they support the Black Lives Matter movement. And six in 10 American adults said they believe Trump’s response to the protests has been wrong.
But on the flip side, the new ABC News-Ipsos poll showed that 64% of Americans oppose the effort to “defund the police” with 60% stating that they do not support reducing police department budgets and reallocating the money for mental health, housing and education programs.
Biden said last week that he does not support the calls by some activists to defund the police, but Republicans still see an opportunity to criticize Biden on that issue, in part because he said he supports “conditioning federal aid to police” based on whether departments can “meet certain basic standards of decency and honorableness.”

One prominent Democratic leader, Rep. Jim Clyburn of South Carolina, has warned that the calls to defund the police are confusing the debate.

“Nobody is going to defund the police,” Clyburn on Sunday told CNN’s Jake Tapper on “State of the Union.” “We can restructure the police forces. Restructure, re-imagine policing… The fact of the matter is that police have a role to play.”
The deadly police shooting of another black man in Atlanta on Friday reignited the debate over the use of deadly force. Rayshard Brooks, 27, who failed a sobriety test administered by police after they responded to a call about a man sleeping in a parked vehicle, resisted arrest and grabbed one of the officer’s Tasers, according to the Georgia Bureau of Investigation. A cell phone video taken by an eyewitness, captured the struggle between two officers and Brooks, who eventually appears to break free and start running away.

The incident set off a fresh round of protests in Atlanta Saturday night — with hundreds blocking a major interstate — and the fast-food restaurant where Brooks was killed was set on fire. Atlanta Police Chief Erika Shields resigned within 24 hours of the shooting.

The former vice president’s challenge in the months ahead will be finding common ground within a Democratic Party that is already showing deep divisions about how to rectify racial injustice. One of Trump’s key strengths is that his core supporters are enthusiastic about his reelection campaign, which may give him wide latitude to broker a GOP compromise on police reform issues.

On Sunday, Republican Sens. Tim Scott of South Carolina and James Lankford of Oklahoma, two of the lawmakers working on a GOP police reform package expected to be outlined this week, signaled they are looking at ideas that could draw bipartisan consensus. Lankford told CNN’s Tapper that he supports a ban on chokeholds and said he and the legislative team have been speaking both with police chiefs and activists to gather “the best ideas” and figure out “how can we actually get something done.”

Scott said Sunday on NBC’s “Meet the Press” that the President is “engaging now in a way that is constructive and helpful.” He said the executive order that Trump is expected to lay out this week “really does reference a national database strengthening, a national database on police misconduct from my understanding.”

“It also talks about the importance of co-responders from a mental health perspective — that both law enforcement and communities like that approach. So I think he’s weighing in at the right time in a constructive manner,” Scott told Chuck Todd.

Trump allies are increasingly playing up his work on sentencing reform as a possible precursor to measures he could support that would rein in police officers who Trump views as “bad apples.” In the President’s interview with Fox News anchor Harris Faulkner last week, he also signaled his disapproval of police chokeholds — a policy area where there could be bipartisan agreement on Capitol Hill.
While many Americans were shocked by the images of authorities pushing back peaceful protesters from the White House with chemical irritants and flash bangs, the President’s allies believe his law-and-order message has resonated with Americans who were also shocked by images of shattered windows along Chicago’s Michigan Avenue, burning police cars and boarded up storefronts in cities where the plywood has yet to come down.
All of that suggests that there may still be a middle path here for the President as the nation contemplates the next steps in the criminal justice reform conversation. CNN’s Kevin Liptak and Kaitlan Collins reported last week that a number of Trump’s advisers, from White House aides to members of Congress to corporate executives, have encouraged the President to adjust his tone and meet the moment.
Trump seemed to take a step in that direction Friday night when he said he would reschedule a campaign rally that was slated to take place in Tulsa on Juneteenth, the day commemorating the end of slavery in the United States.
Beyond Trump’s harsh and dismissive comments about the demonstrations against racial injustice — and his apparent failure to grasp the depth of America’s racial inequities — the decision to hold the rally in Tulsa was seen as a major affront because of the city’s history as the site of one of the worst incidents of racial violence in the nation’s history: the 1921 massacre of hundreds of African Americans who were attacked by a white mob.
Trump said he was delaying the rally to show respect for Juneteenth — a sign he might be listening to some of the advisers pleading with him to change his tone.
But hours later, he was ready to wade back into the culture wars when he seemed to suggest in a Saturday tweet that he would no longer watch the NFL if the league condones players taking a knee while the national anthem is played, a practice he has long criticized.

His next move is anyone’s guess.

READ  The known rival was finally blocked by Facebook

This story has been updated with additional developments Sunday.