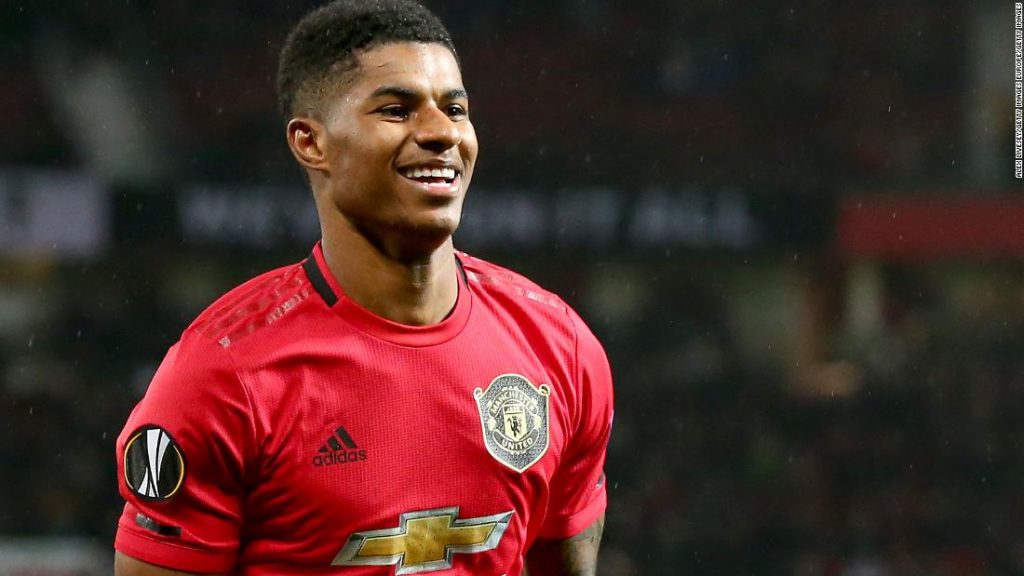 By eloquently and calmly putting forward his case for free school meals to be provided to the poorest families in England over the summer school holidays, the Manchester United star on Tuesday forced the government into a U-turn.

Within hours of the government’s about-face, the hashtag #sirmarcusrashford was trending on Twitter and the footballer was being thanked in the UK Parliament by the leader of the opposition, Keir Starmer. He is leading UK news bulletins and dominating newspaper headlines.

Such was the force of Rashford’s campaign, launched on Monday, that had Johnson not changed tact he was reportedly risking a rebellion from his own backbenchers.
As one of England’s most talented players, Rashford has had the ability to influence others for a number of years, ever since he scored on his United debut in 2016 to become an instant hero, but over these last few months his voice has never been louder.

If a person’s true character is revealed during a crisis, Rashford has proven himself a leader; a player with drive and a social conscience. A self-made multimillionaire who has used his profile to make a difference during a once-in-a-generation pandemic which has brought heartache and hardship on many.

He is the reason why families entitled to free school meals will now receive a one-off voucher at the end of the school term, worth £15 ($18) a week for the six-week school break, which they can spend in supermarkets. Over a million children will be beneficiaries.

Since the start of the pandemic, this Manchester-born son of a single mother has raised millions in donations alongside food charity FareShare, launched a poetry competition for deaf children and learned sign language. Few have been so prolific and effective during lockdown.
Last December he partnered on a drive to counter homelessness. He also recently posted a powerful message on Twitter following the death of George Floyd.
It was at the beginning of April, as the coronavirus pandemic was taking hold in the UK, that British health secretary Matt Hancock told English Premier League footballers to “make a contribution” and “play their part” in looking after the less fortunate.

Rashford has forced Hancock’s government to do the same.

Footballers have often been easy targets and Hancock was happy to attempt to pit the “ordinary” people against the stereotype of the overpaid, greedy footballer.

But these are young, high-achieving men, many of whom are from poorer backgrounds. There are plenty, like Rashford, who have not forgotten the sacrifices made by others in their journey to the pinnacle of their sport, memories of those early struggles have not faded, and there are plenty who are enlightened and are a force for good, such as Raheem Sterling, Trent Alexander-Arnold and Andrew Robertson, to name a few.
In his open letter to UK lawmakers on Monday, Rashford, the youngest of five children, spoke about how as a child he relied on free school meals and “the kind actions of neighbours and coaches.”

“The system was not built for families like mine to succeed, regardless of how hard my mum worked,” he wrote, before adding: “This is not about politics; this is about humanity.”

It was an impressive letter from a footballer who first sought to learn more about his subject before going on to make such an impact, asking people to send him videos of their experiences of the government’s food voucher scheme and how ending it would impact them. “I need to understand better the exact scale of this problem,” he tweeted.

In a BBC interview on Monday, Rashford also revealed how his mum made him join United’s academy a year early, aged 11, to ensure he was getting the right nutrition. “It was to help my mum with her situation and also get me out of the situation that I was in,” he said.

The Conservative government was initially unmoved by the striker’s plea — some lawmakers had wanted a policy change for weeks — but Rashford pushed on. “We aren’t beaten yet, stand strong for 200,000 children who haven’t had a meal to eat today and keep retweeting,” he said.

Perhaps the government did not fully comprehend the sway of a man with nearly three million Twitter followers, 8.4 million on Instagram and 3.3 million on Facebook. Perhaps Johnson was unaware that this was a boyhood United fan who had hardly put a foot wrong since making his debut for his hometown club — not only did he score on his debut, he also found the net in his first EPL outing, his first Manchester derby and first Champions League match.

Perhaps none among the powers that be appreciate the strength of will it takes for a boy from a low-income family to succeed in such a competitive industry, especially at one of the world’s most successful clubs, making it unlikely that Rashford was going to easily give up on a matter so close to his heart.

As a child growing up in one of the more deprived areas of Manchester, he would endlessly kick a football; in his bedroom, down the hallway, in the park near the council estate where he grew up, competing against his older brothers, dreaming of being the next Wayne Rooney. His passion and perseverance helped him succeed against the odds. Johnson was forewarned.

Less than 24 hours after Rashford made public his letter, Johnson made his U-turn and Rashford had proven himself to be arguably a more remarkable activist than he is a footballer, which is some feat for a player who, four years ago, became the youngest footballer to score on his England debut.

“I would put Marcus Rashford in No.10 running policy because he’s an incredible guy,” Conservative lawmaker Robert Halfon told the BBC on Tuesday. “He’s an extraordinary individual — he’s a hero of our time.”

Rashford had already achieved much in football; representing his country at a European Championship and a World Cup, scoring 64 goals for United — a tally that will only increase over the next few years — but whatever his accomplishments on the pitch, none compare to the impact he has had in his country these last few days.