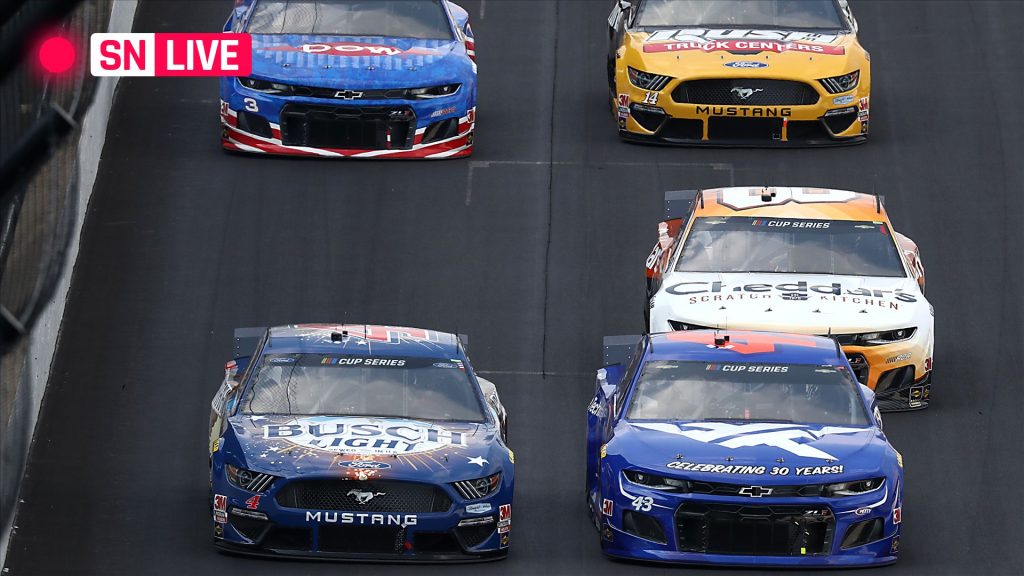 The Brickyard 400 will run Sunday afternoon in Indianapolis without one of NASCAR’s most important elder statesman.

After testing positive for COVID-19, Jimmy Johnson pulled out of the race. He will be replaced by Justin Allgaier.

Elsewhere, though, it should be business as usual as the NASCAR season continues to heat up. Two-time Brickyard winner Kyle Busch will try to bounce back from his DNF at Pocono last weekend, and Denny Hamlin will try to continue his positive momentum.

Sporting News is tracking live race updates and lap-by-lap highlights from Sunday’s NASCAR race at the Brickyard. Follow below for complete results from Indianapolis.

NASCAR at Indianapolis live race updates, highlights from the Brickyard 400

Officially involved in the crash on pit road

Red flag at Indianapolis after that pit road wreck. Ambulance has arrived to tend to the No. 12 crew member.

Crewman loaded into the ambulance. Gave a “thumbs up” to the other guys.

5:35 p.m.: A big pit road wreck that might have clipped one of Ryan Blaney’s crew members prompts the red flag.

Oh crap. I hope that crew member on the 12 team is OK. Looks like he got his leg jammed between cars.

And we have a pile up on pit road with LaJoie, Stenhouse, Allgier, Preece looked to be involved | #NASCAR

Martin Truex Jr. says he has an error message on his engine control unit.

5 p.m.: The weather is finally cooperating.

NASCAR plans on having prerace ceremonies begin at 5pm ET.

Assuming there are no more weather delays, here is the updated minute by minute:

4:29 p.m.: With no lights at the track, NASCAR really shouldn’t have made this a late start.

NASCAR sent out the second lightning hold notice at 3:57 p.m. ET, which means it would be at least 4:27 ET before the shelter request is lifted. Obviously, start of the race will be delayed. Love these late afternoon starts.

4 p.m.: Race will be delayed because of lightning. Business as usual this season.

3:40 p.m.: Kurt Busch’s wife, Ashley Busch, had a banner flown over the venue to celebrate Busch’s 700th career start. Alex Bowman, who shares her initials, responded with a joke.

The green flag for Sunday’s NASCAR Cup Series race at Indianapolis will wave shortly after 4 p.m. ET, assuming there are no rain delays as there have been so often since NASCAR returned to live racing in May.

The later start time is notable, because Indianapolis Motor Speedway does not have lights in the event Sunday’s race is delayed by weather.

Here are the results of Thursday’s draw for the starting lineup in the Big Machine Hand Sanitizer 400 Powered by Big Machine Records at Indianapolis Motor Speedway:

* Allgaier is driving in place of Jimmie Johnson, who tested positive for COVID-19.