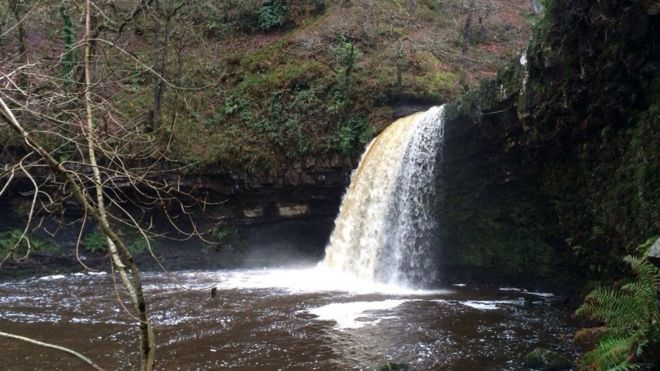 A TEENAGE boy has been rushed to hospital with spinal injuries after a “tombstoning” leap off a 65ft waterfall.

The 13-year-old jumped off the waterfall in Pontneddfechan, in the Vale of Neath, Wales, today.

He was airlifted to hospital after being treated at the scene by rescue workers.

A spokesman for the Western Beacons Mountain Rescue Team said they were called to Pontneddfechan, Glynneath, at 3.30pm today.

He added: “The team responded with four vehicles and 15 team members to Sgwd Gwladys (Lady Falls) where the casualty was treated by the team.

“The casualty had jumped off the waterfall ‘tombstoning‘ and had hit the bed of the river when he entered the water.

“The casualty suffered from a suspected spinal and pelvic injuries.

“The casualty was placed in a vacuum mattress to immobilise his spine and loaded onto a stretcher.”

Team leader Neil Butcher said: “Due to the casualty’s injuries and to save him a very painful carry out a coastguard rescue helicopter from St Athan was requested to winch him from the location.”

In the UK alone, there have been at least 20 fatalities since 2005 – with over 70 people injured due to taking part in the stunt.

Landlord advertises garden ‘shed’ to live in for £1,500-a-month

READ  1 in 5 teachers will not return to classrooms this fall: referendum

James Stunt arrested with trousers around ankles after online rant

In May 2020, a tombstoner was left unconscious after belly-flopping 200ft into the sea at Durdle Door, and had to be resuscitated.

A second man, aged about 25, suffered serious spinal injuries after jumping off cliffs into the sea. He was airlifted to hospital.

And a third man, also in his early 20s, is thought to have suffered a broken leg after leaping off the rocky arch and was taken to hospital by land ambulance.

Notable cases of tombstoning going wrong include that of Vincent Wagstaff, 39, who was killed after landing on rocks near a yacht club in Plymouth, Devon.

The Dangers of ‘Tombstoning’ 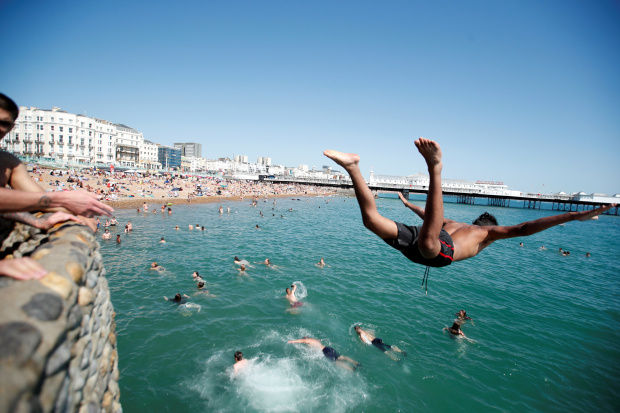 Jumping into the unknown from a cliff or pier into water can result in serious injury or even death.

Thrillseekers hurl themselves from high-up ledges, such as cliffs, piers and other structures into water below – often unaware of how deep the water may be and what lies beneath it.

The leap is easy to misjudge and often leads to serious and fatal injury as jumpers hurl themselves on to submerged rocks and debris below the surface.

The Maritime and Coastguard Agency describes the craze as “a high-risk, unregulated activity, undertaken by unsupervised individuals”.

Tombstoning is particularly dangerous as water depth can be unpredictable as it changes with the tide.

Water can often be shallower than it appears from above.

Other dangers include the shock of cold water, which can be as low as 15C in the summer.

The impact of jumping into dramatically cooler water can make it difficult to swim, or unanticipated currents can sweep swimmers away.

Entry into the water as well can be dangerous as your body position can change resulting in a belly-flop or landing on your back.

Murky water can also camouflage an array of hazards such as rocks or other sharp objects – meaning many tombstoners are jumping into the unknown.

In May 2020, a tombstoner was left unconscious after belly-flopping 200ft into the sea at Durdle Door, and had to be resuscitated.