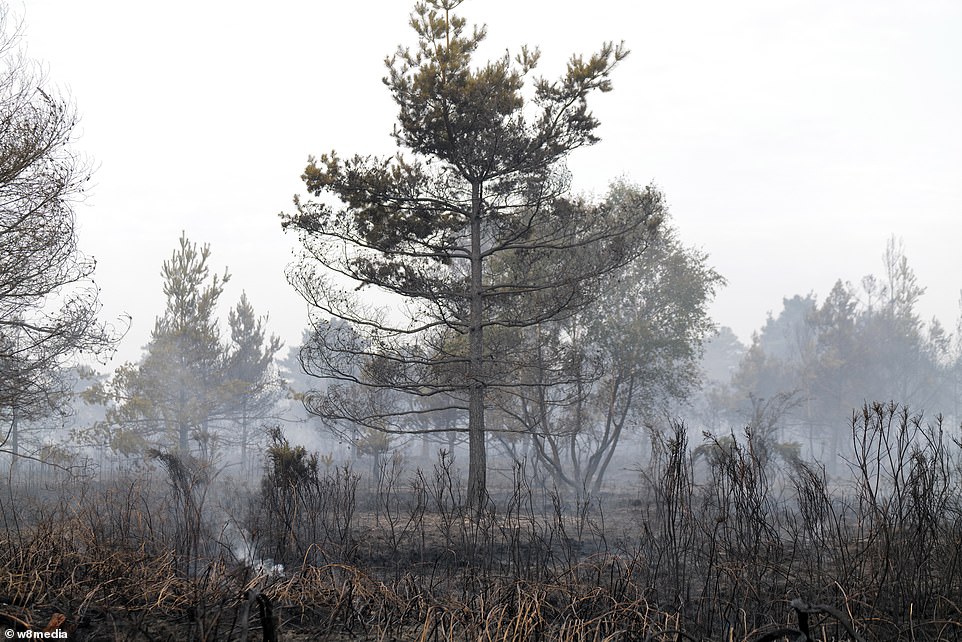 Firefighters battling a huge wildfire in Surrey have today told evacuated families not to return to their multi-million pound mansions after they declared the blaze a ‘major incident’.

Sixty gated properties – home to around 100 people – have been evacuated from Heather Drive in Ascot, where homes are sold for around £2million, due to plumes of smoke in the air.

Surrey Fire and Rescue Service told MailOnline that no other properties have been evacuated yet while today 25 vehicles have been sent to tackle the blaze for a second day.

Yesterday the embattled service sent 40 fire engines including two water carriers to fight the grass fire which started on Chobham Common and could be seen from the Shard in London.

Surrey Fire and Rescue Service has declared the fire a ‘major incident’ while several road closures remain in place – including Windsor Road from Titlarks Hill to Chertsey Road (B386) and part of Chertsey Road.

They are being helped by West Sussex Fire and Rescue Service, which said in a statement this morning they have ‘stood up our retained stations to be immediately available for any incoming incidents’. 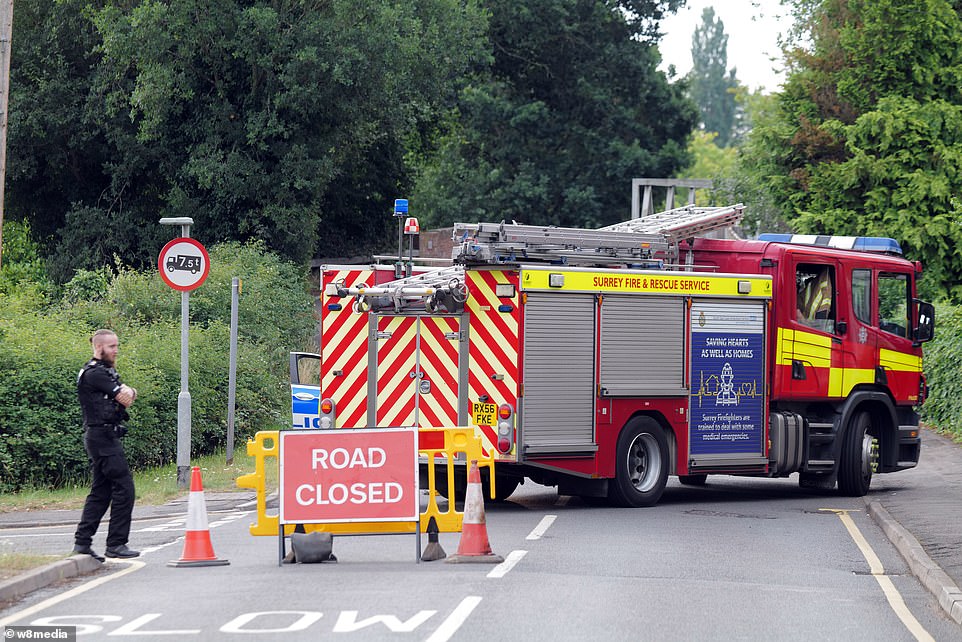 Around 60 properties, home to around 100 people, have been evacuated from Heather Drive in Ascot, where homes are sold for around £2million, due to plumes of smoke in the air 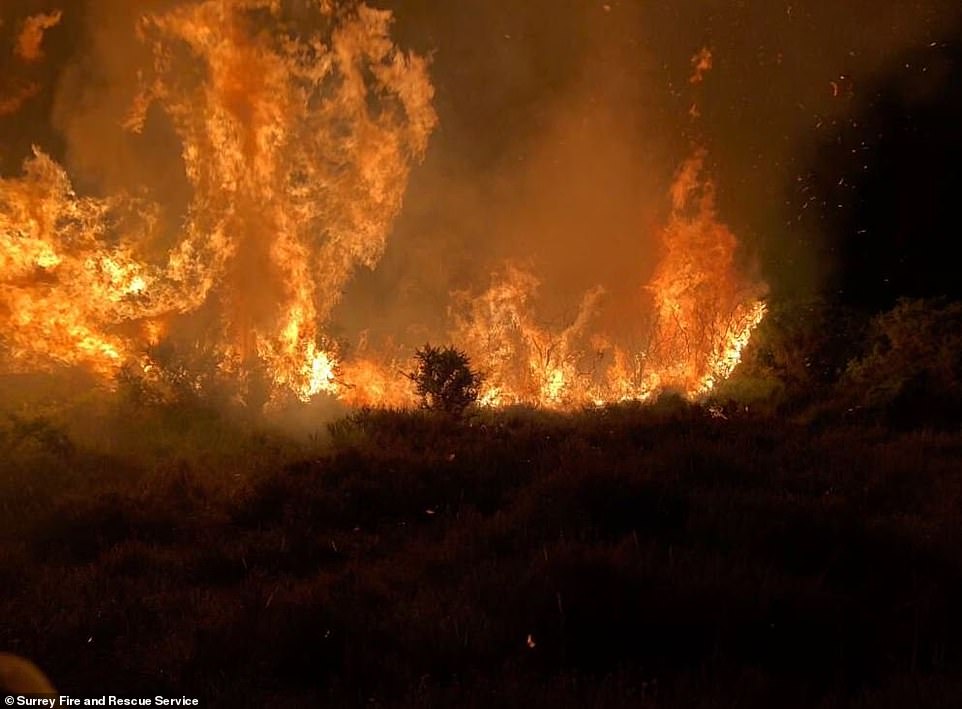 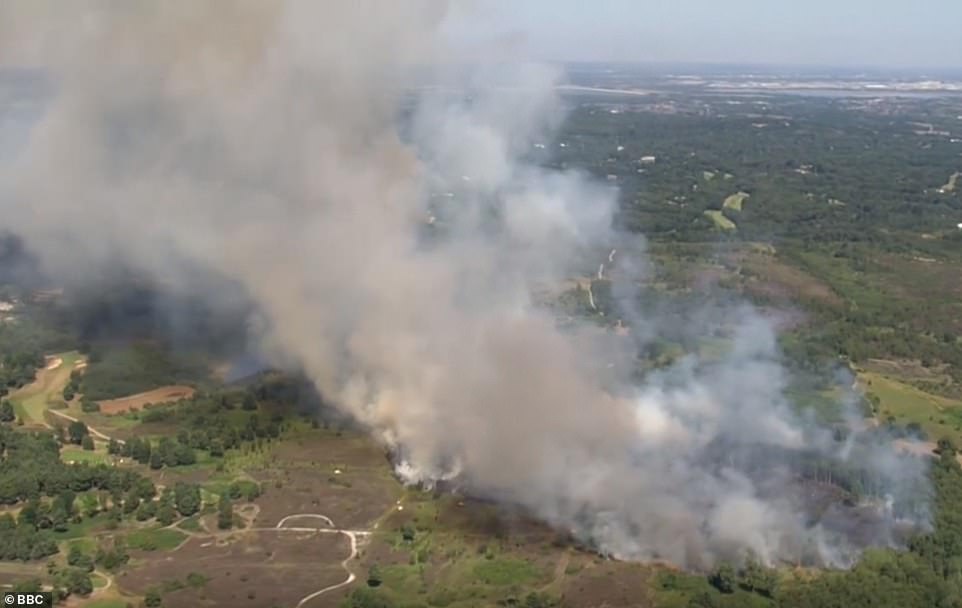 Around 60 houses, home to about 100 people, have been evacuated from Heather Drive in Ascot due to plumes of smoke in the air 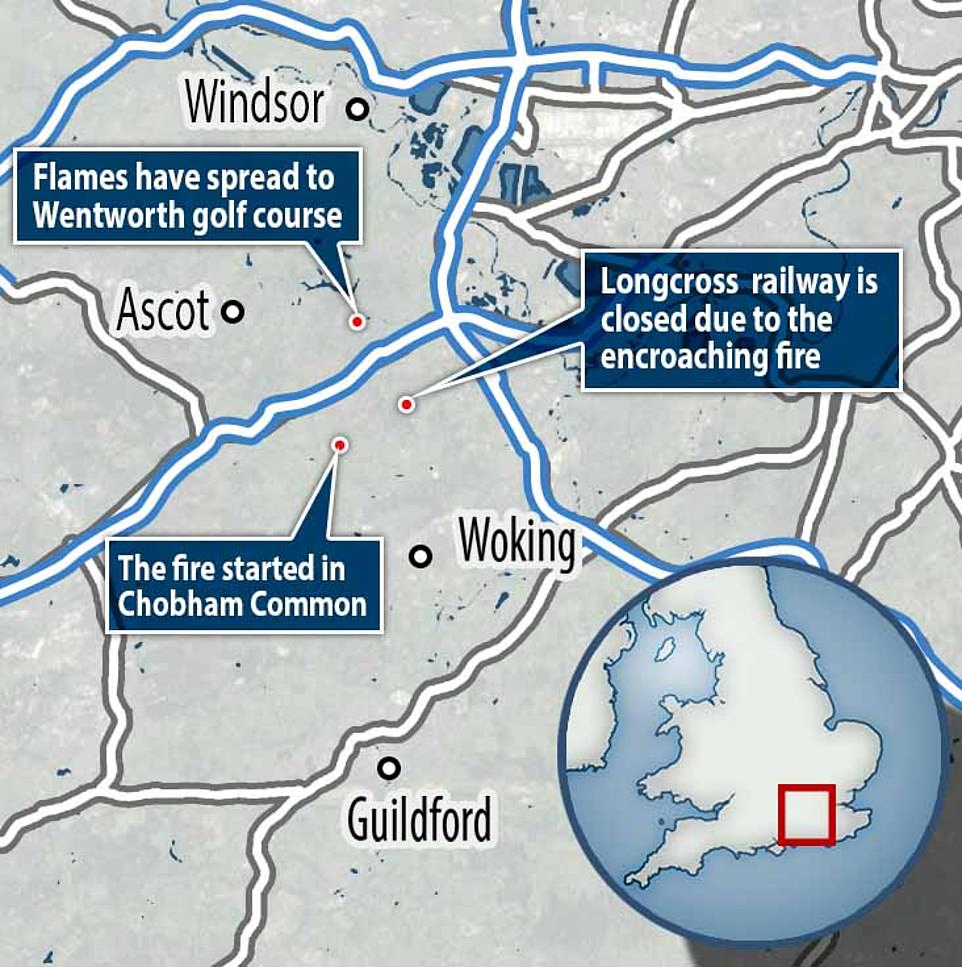 In a statement, Surrey Fire and Rescue Service urged Heather Drive homeowners not to return to their mansions and warned there was a level four risk of spreading wildfires during the mini-heatwave.

They said: ‘Crews remain on scene at the fire on Chobham Common which spread to around 150 acres at its peak.

‘Overnight the cooling temperatures and hard work of crews contained the spread but we’re expecting firefighters to be on scene through the day. Please avoid the area for your own safety.

They added: ‘A number of roads in the area remain closed and some properties were evacuated. Residents that were evacuated should not return to their homes.’

Surrey Fire and Rescue Service tweeted: ‘The Fire Severity is currently at level 4. Meaning the risk of wildfires & rapid spread of fire can occur. Please take extra care if your (sic) out in the forestry/park areas. Please do not use disposable BBQs and ensure smoking materials are fully extinguished.’

The fire service told MailOnline that the cause of the blaze is being investigated, but added that the weather and mini-heatwave which has seen temperatures soar to nearly 100F played a role.

Rich residents were spotted popping back to their million pound properties to collect essentials before heading to stay with friends and family after being told the fire was ‘still smouldering.’

Alistair Lines, a 64-year-old nearby resident, told MailOnline: ‘Fires in Chobham Common have been quite regular over the years, but I have never seen it so close to the houses. It is only about 100m from the fire to someone’s expensive garden, normally the fires are right over the other side nearing the M3.

‘I was brought up on this road when it was just a three bedroom home but now this road is like millionaires row. I would have been worried last night if I lived in one of these massive houses.

‘The fire is bigger than I’ve ever seen, it’s quite something. 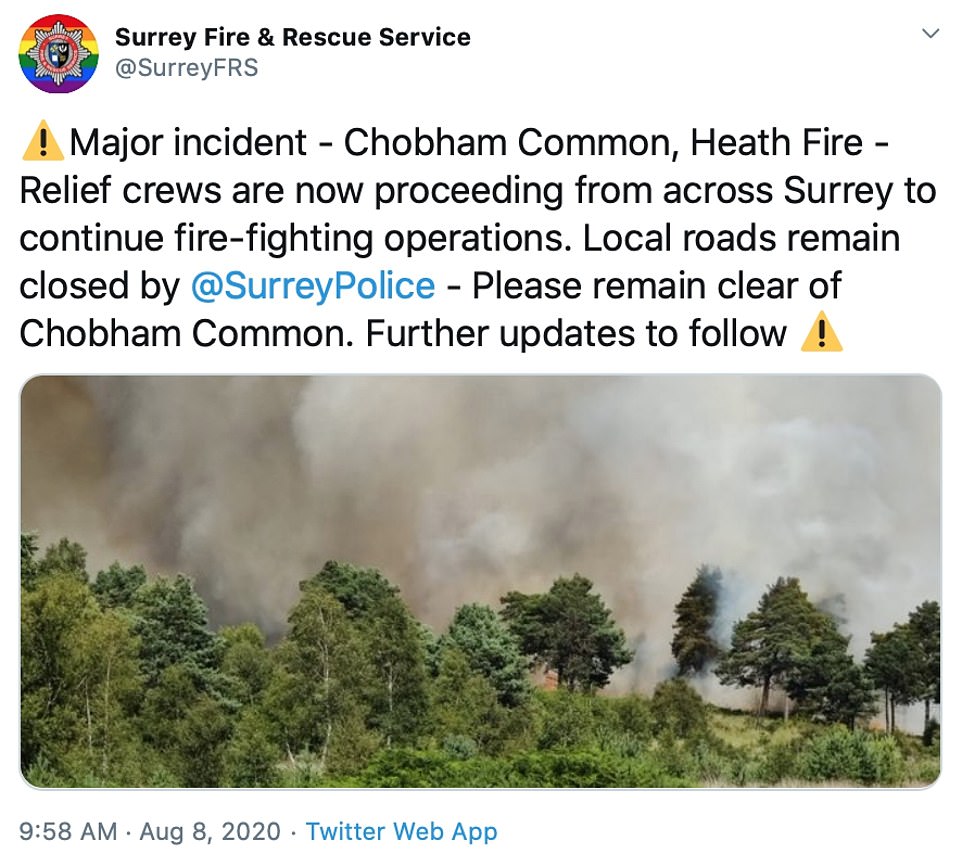 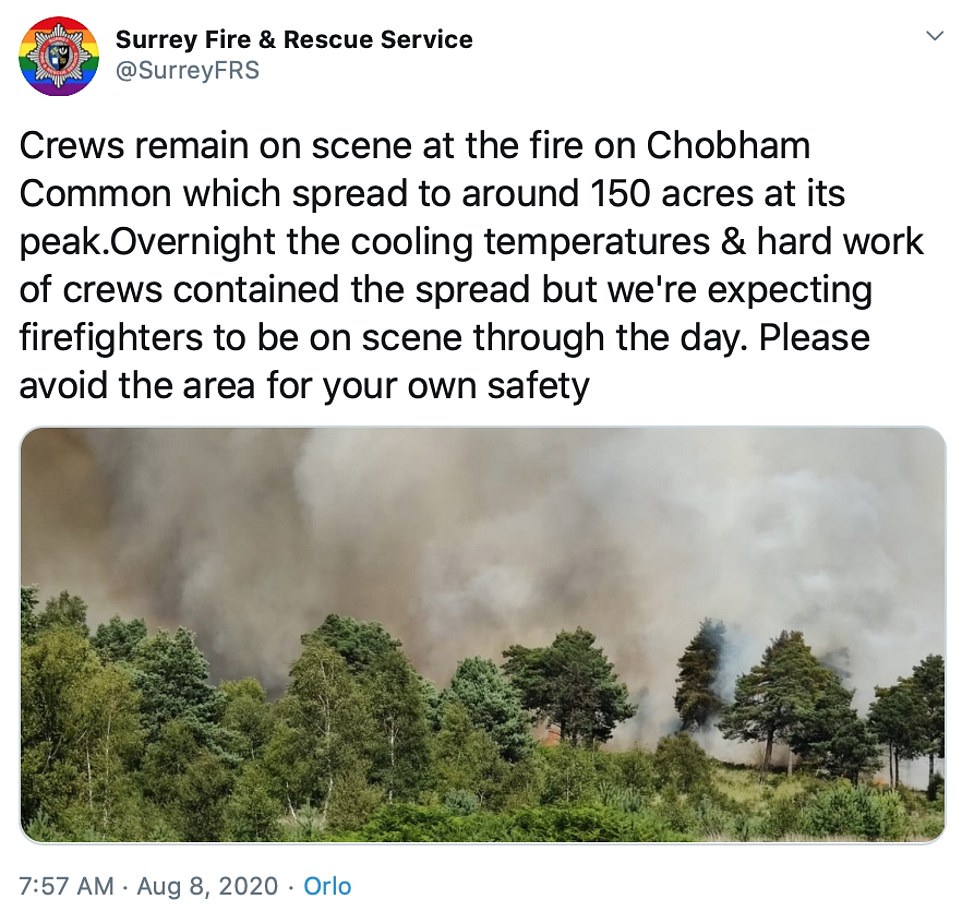 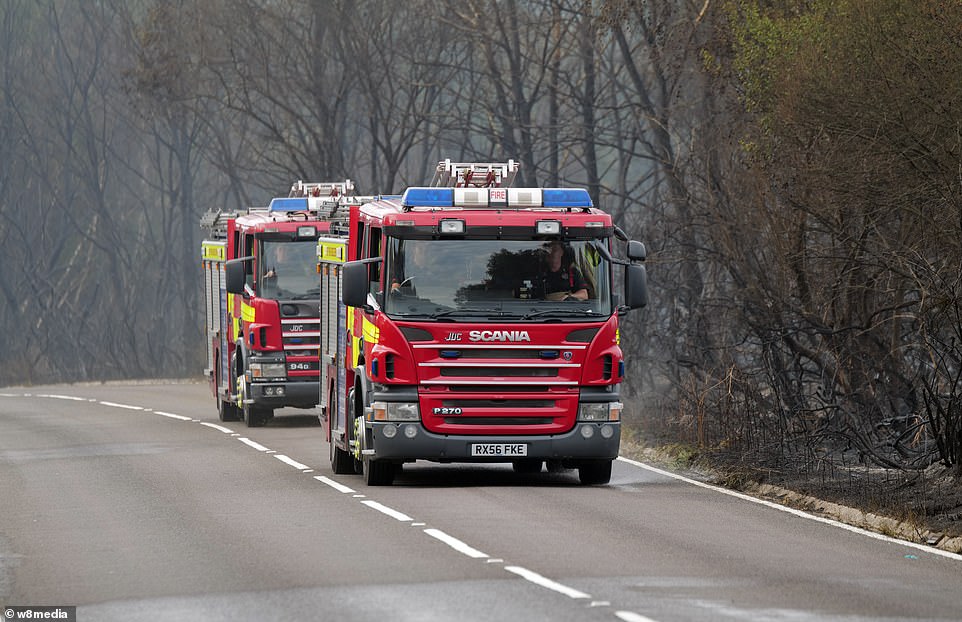 In a statement, Surrey Fire and Rescue Service said: ‘Crews remain on scene at the fire on Chobham Common which spread to around 150 acres at its peak’ 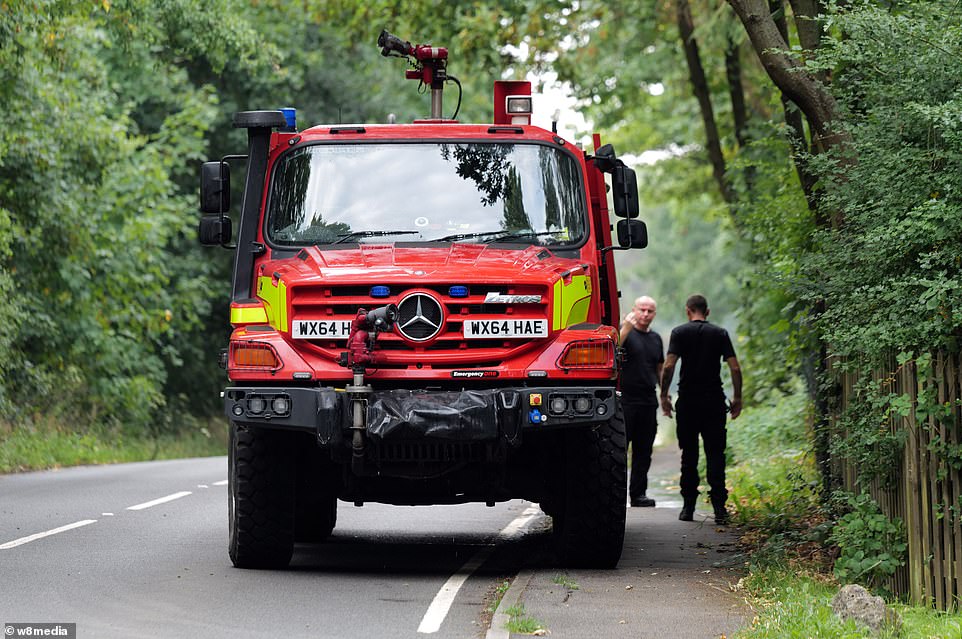 ‘Overnight the cooling temperatures and hard work of crews contained the spread but we’re expecting firefighters to be on scene through the day,’ the service said

‘I think they’ve got the fire under control, when I drove round there they were all sitting down having a cup of tea. It is like a ghost town around here with everyone being evacuated.’

On the main road leading up to the common, cars were being turned away by a response officer who told motorists that the fire was just ‘300 yards away.’

A Windsor and Maidenhead council worker wearing high vis said: ‘I’m trying to stop people driving through this road closure, as the vast majority of people around here are ignoring it.

‘The fire is literally 300 yards that way. The fire is still smouldering, it is still a live incident. Residents on Heather Drive have been asked to leave their properties,’ the response officer added.

Millionaires watched from their windows last night as the wildfire burned acres of countryside.

Jonathan, a 54-year-old company director, told MailOnline: ‘We live on the road that’s been asked to evacuate. I think it will smoulder for quite a few days because it is such a big fire.

‘We aren’t sure how it started, it’s very dry but it could have been anything.

‘We’ve lived here for 15 years and obviously you don’t want million of pounds worth of houses to go up in flames. The fire backs onto our property so we could see it from our windows, it was quite a sight.’

A homeowner rushing back to his home in Onslow Lodge to grab extra clothes before heading to stay at a friends for a second night told of his experience.

The 50-year-old accountant who didn’t want to be named said: ‘We were asked to leave yesterday but we were allowed to pop back for five minutes to grab some more stuff we are still under evacuation at the moment.

‘The common is just the other side of the railway, we are worried but I am hoping that they have it all under control, there is no property that has been destroyed yet.

‘I think a lot of area has been affected and because the temperature is so hot the risk is that there is still undergrowth smouldering away and then it could quite easily catch again.

‘The police were brilliant, just knocked in our door yesterday afternoon and asked us to gather our stuff and leave. This area is worth a fortune, what I’m hoping is that there is a lot of expense houses between me and the fire.

‘Wentworth golf club is a two minute walk away, golfers had to stop play yesterday during a ladies cup because there were flames ravaging in the background. It was pretty spectacular really.’ 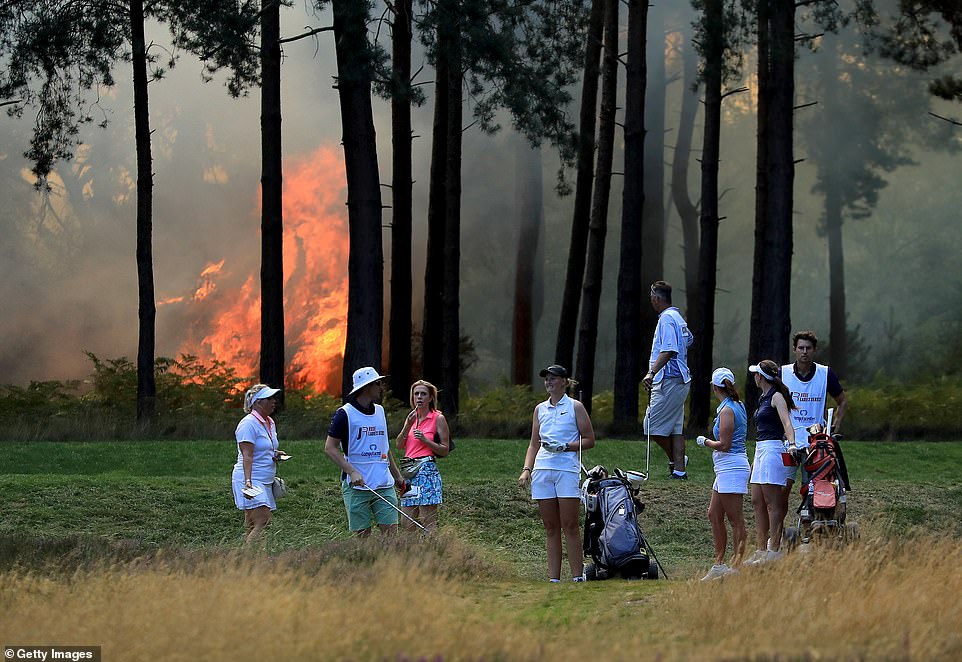 Eyewitnesses saw the fire from more than 20 miles away in west London and from tall buildings in central London.

Last night Surrey Police said: ‘The fire on Chobham Common is an ongoing incident with significant numbers of emergency services on the scene who are likely to remain there for some time. Please continue to avoid the area.

‘We are aware of reports of social media posts suggesting that residents can return to HEATHER DRIVE – this is not the case. Please DO NOT attempt to return home at this time.

‘We thank the public for their continued support of all multi-agency colleagues working on the ground.’

Play at the Rose Ladies Series Grand Final had to be halted and the final has been cancelled after a ‘wall of flames’ spread to Wentworth golf course.

At around 11.30pm last night, The Rose Ladies Series wrote on Twitter: ‘With a heavy heart, the Major Incident Command Centre have closed Wentworth tomorrow due to the severity of the ongoing fire risk.

‘The Grand Final restart is cancelled until further notice. Most importantly, players, caddies & staff must be safe.’ 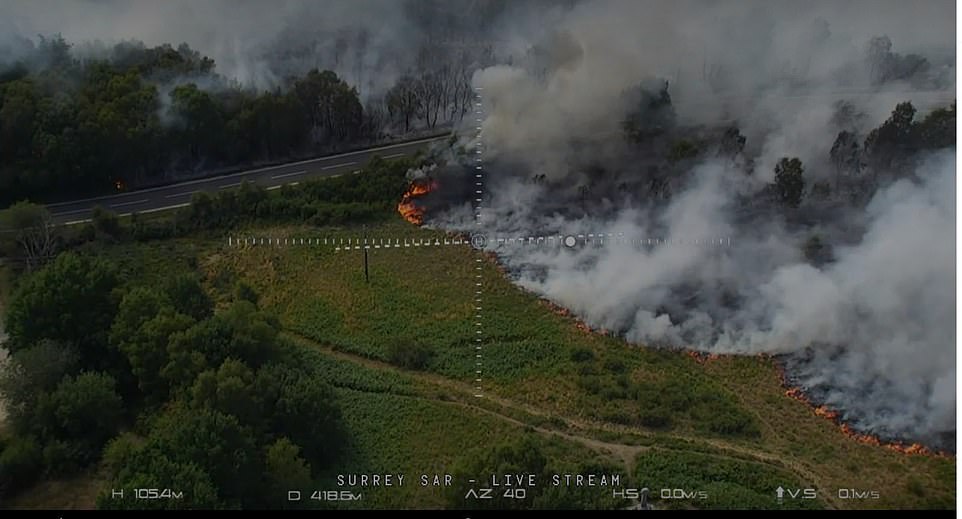 The fire started at around 12.25pm in Chobham Common before spreading to the nearby golf course

Griff Ryan, 23, who lives in Sunningdale near to the blaze, said the fire began with a ‘strange light’ at around 1pm before smoke and then later a ‘wall of flames’.

‘Smoke got gradually worse and ash began falling into our garden,’ he said.

‘Now standing on Chobham road. At around 5pm fire still wasn’t visible from the road.

‘Over about half an hour it’s become visible and now can see a wall of flames down towards the railway line.

‘Other residents I’ve spoken to have said it’s the worst they’ve seen in 30 years.’

Surrey Heath MP and Chancellor of the Duchy of Lancaster Michael Gove said he was ‘horrified’ by the damage caused by the fire.

The fire service said yesterday: ‘We received a call this afternoon around 12.25pm to a report of a fire on Chobham Common. 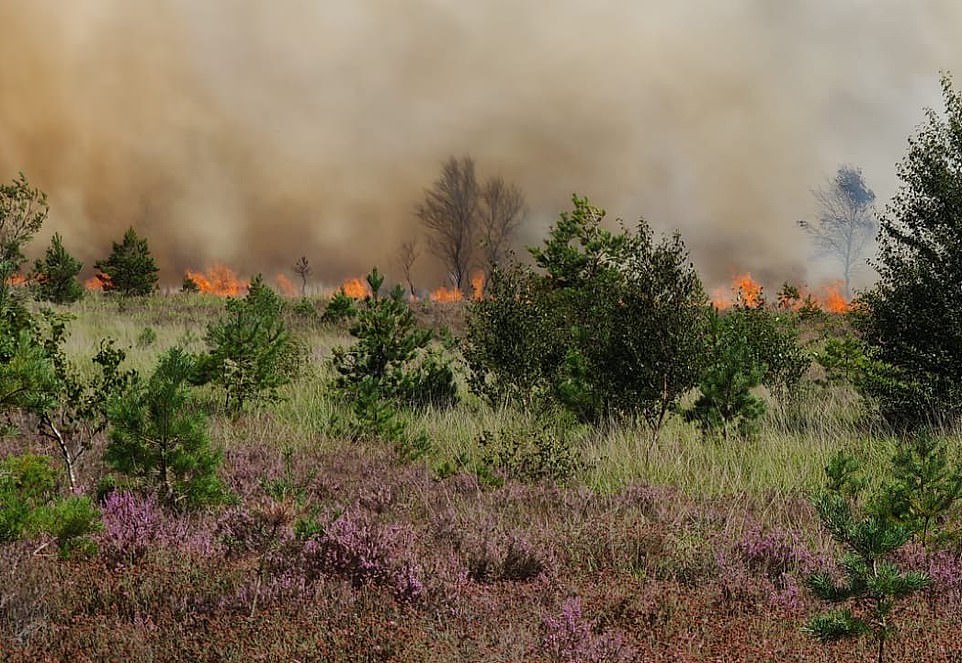 Ten fire engines have been sent in total, alongside multiple specialist vehicles, with the first arriving at the scene around 12.35pm 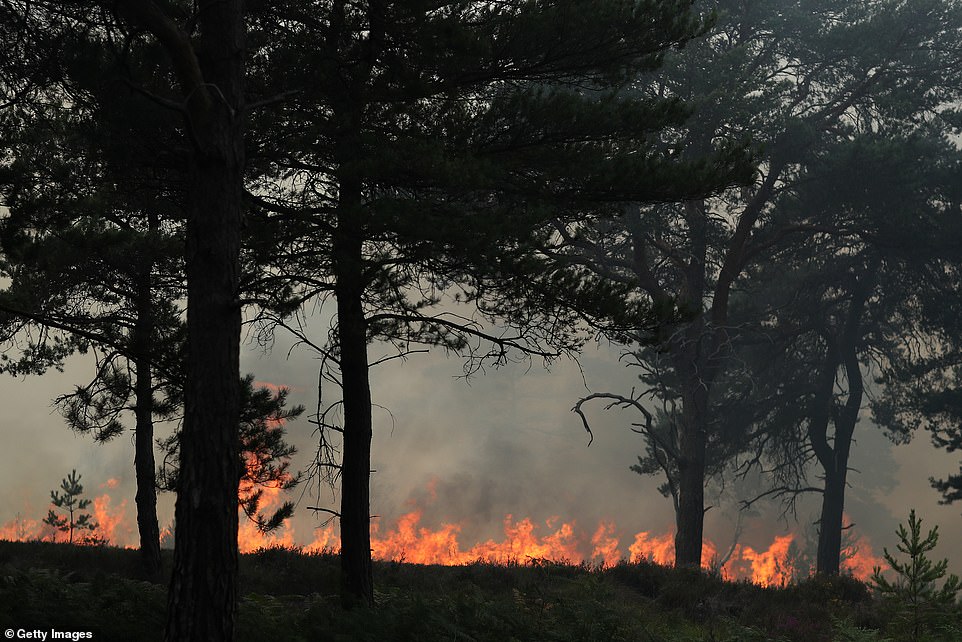 ‘Ten fire engines have been sent in total, alongside multiple specialist vehicles, with the first arriving at the scene around 12.35pm.

‘Approximately 41 hectares of grass and undergrowth are alight. Crews remain at the scene tackling the fire.’

Surrey Police added: ‘Surrey Fire and Rescue are working hard to get the fire under control, and we are assisting with evacuations and road closures.

‘If you are on the common you need to evacuate immediately, following instructions from the police and fire officers on the ground.

‘If you decided to walk off the common, but have left a vehicle in one of the car parks, please message us immediately so we can account for you.

‘The fire is travelling fast due to the wind, and there is also a risk of reduced visibility due to smoke. 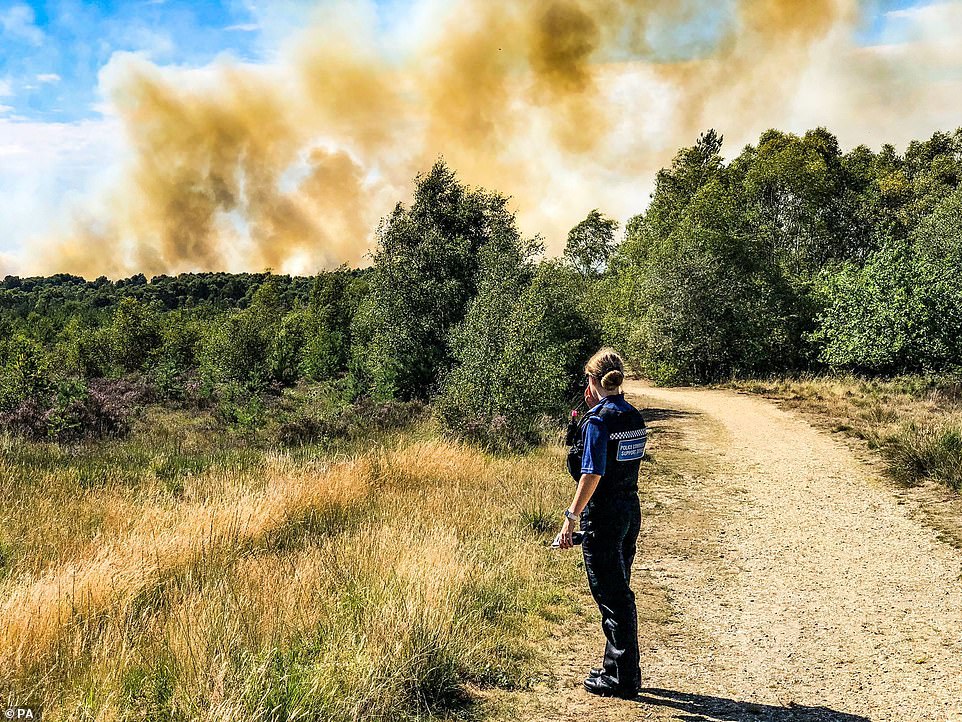 ‘If you are affected by the smoke from the fire please keep windows and doors shut to avoid health problems.’

Pro golfer Felicity Johnson told Sky News Sports News: ‘I was just on ninth green, the group ahead had teed up and then we could see a lot of smoke.

‘We could see it moving in the distance and it seemed to get closer pretty quickly. We waited five to ten minutes and it was the noise that was pretty scary.

‘We all know how fast fire can travel and then we saw ash landing on our clothes.’

According to Sky Sports News, no one has been injured on the golf club but everyone was asked to leave the West Course.

Smoke from the fire was visible in London and had earlier been mistakenly thought to be coming from Heathrow airport by some on social media. 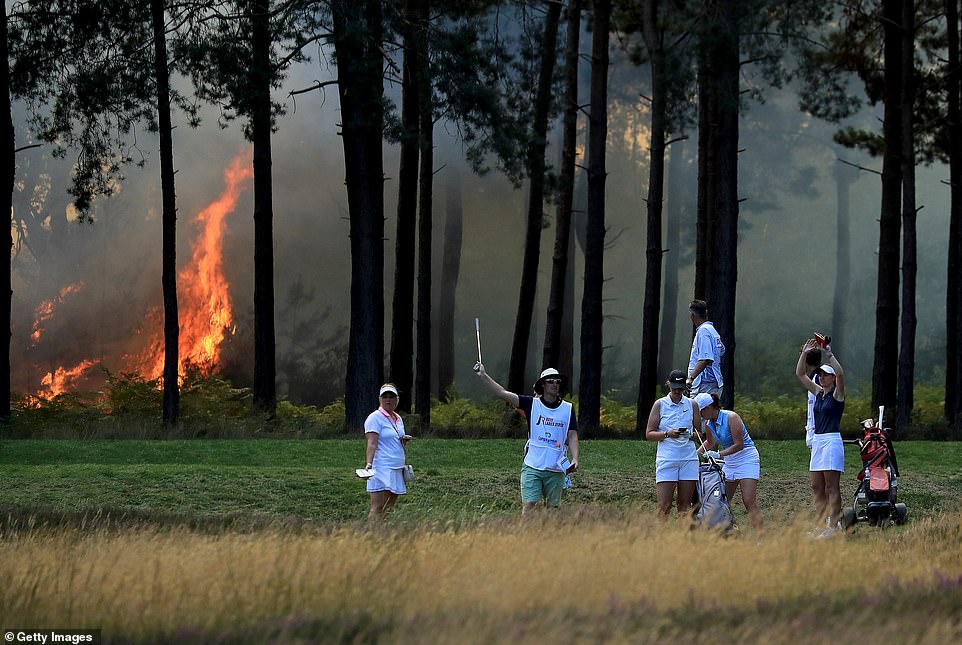 The fire stops play as the group of Cara Gainer, Sophie Powell and Gabriella Cowley wait to play off during day three of The Rose Ladies Series on The West Course at Wentworth Golf Club 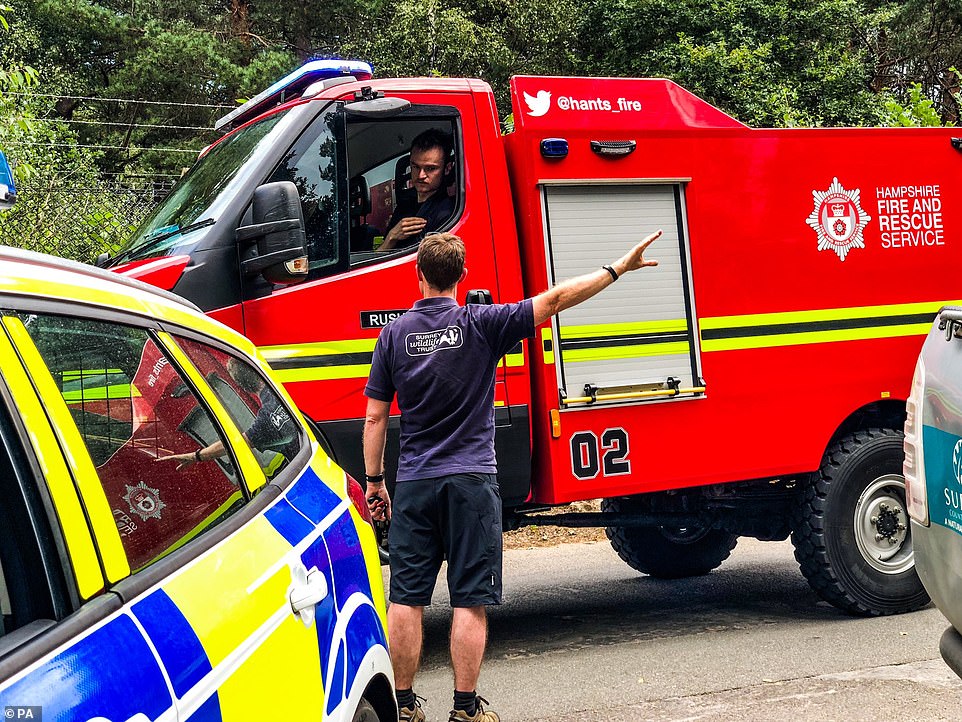 Surrey Fire and Rescue Service said it sent 10 fire engines, two water carriers and 10 other vehicles to tackle the blaze

MP for Surrey Heath Michael Gove said: ‘I’m horrified by the damage this wildfire has done to Chobham Common – and hope people will heed this evacuation warning – thanks to Surrey Fire and Rescue service for their bravery in tackling this terrible tragedy.’

Ash assumed to be from the fire has been reported to have fallen on homes as far as Windsor.

Councillor for the Royal Borough of Windsor and Maidenhead said: ‘Ash is now falling in my garden in Windsor.

‘I can only assume from Chobham. It must be a huge fire.’

The railway at Longcross in Surrey was blocked and trains could pass because the fire encroached on the line. 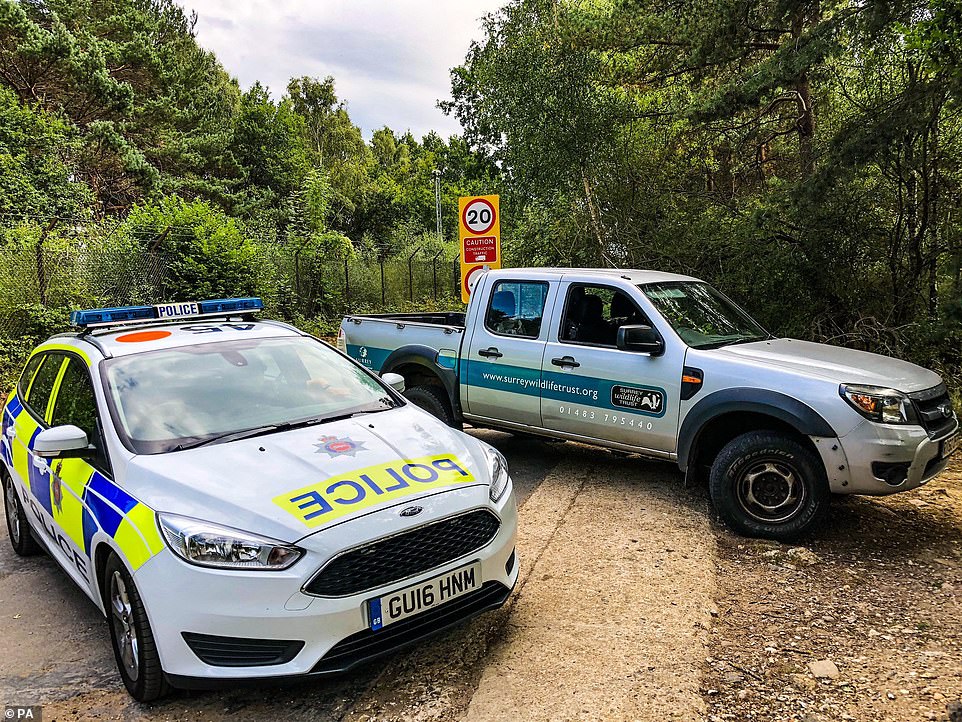 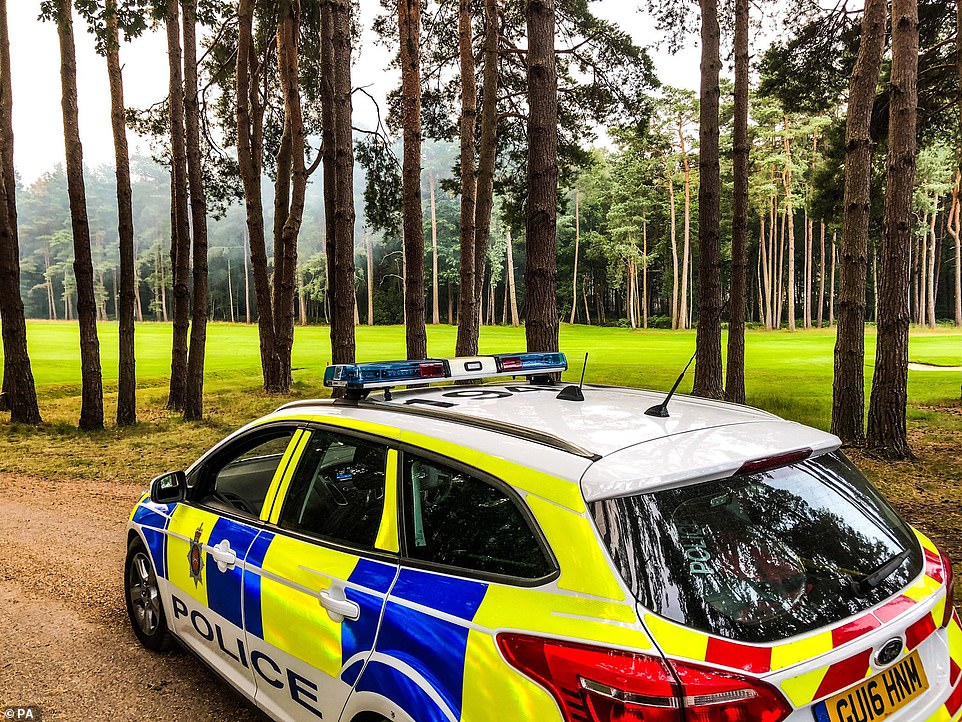 Approximately 41 hectares of grass and undergrowth are alight. Crews remain at the scene tackling the fire

Chobham Road was closed between Titlarks Hill Road and the roundabout junction with Windsor Road and Chertsey Road.

The golf has been suspended for the rest of the day and plans to continue the final round at 9.30am tomorrow morning have been cancelled.

The Royal Borough of Windsor and Maidenhead has been approached for comment.