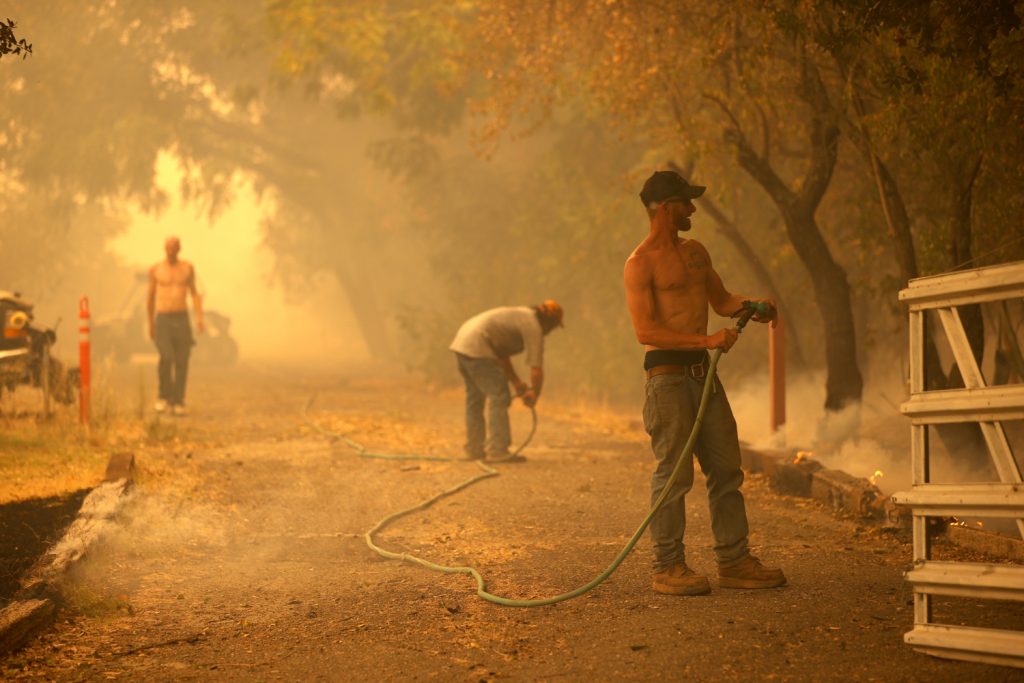 Cal Fire has not reported any new structural damage or injuries. Officials say the fires are still active and moving in multiple directions, impacting multiple communities. Several fires have merged on the north side of Lake Berryessa into the Hennessey Fire, moving into large areas of timber.

Evacuations are still in effect in the impacted counties, including Solano County. For the latest evacuations, check their website.

The Solano County Sheriff’s Office issued another update Friday evening about the damage and destruction from the LNU Lightning Complex Fire in their county. The sheriff said at least 154 homes have been destroyed or heavily damaged and they expect that number to rise.

More than 62,000 acres have burned in the county and the sheriff said hundreds of PG&E poles are down with wires across roads, making it unsafe to return to the area.

PG&E crews are working to repair their lines as law enforcement is increasing patrols to prevent any looting.

Sheriff Tom Ferrara said he had never seen anything like the speed and heat intensity of this fire.

“For this fire to cover the ground in, let’s say three or four hours, from Lake Berryessa all the way into Solano County, Gibson Canyon, Pleasants Valley Road, we’re so fortunate that folks got out in time,” Ferrara said.

The LNU Lightning Complex Fire has destroyed at least 119 homes in Solano County, the sheriff’s office said Friday afternoon. Officials said approximately 50,000 acres burned in the county and 14,000 people — about 5,250 residences — were evacuated.

Crews have assessed around 471 homes so far. There has been one reported death on Pleasants Valley Road, but no other major injuries or fatalities.

The sheriff’s office said they were hoping to repopulate the Green Valley area Friday, but fire behavior has changed so evacuations remain in effect and will be revisited on Saturday.

Ranchers and farmers can apply for special permits to go into evacuation zones and take care of their property.

Current evacuation orders can be found on the Solano County website.

Police say all evacuation orders within Vacaville have been lifted.

As of 1:05. p.m. Friday, all residents within the city limits are now clear to come back home.

There are still some areas in unincorporated Solano County where residents remain evacuated.

Authorities say back burns are being done against the LNU Lightning Complex Fire on Friday to try and keep the flames from coming down into near Yolo County from the Blueridge Mountains.

The facility had closed the base non-essential staff, but stayed open for mission-essential personnel.

Travis AFB officials say residents of the base housing and dorm facilities could start returning after 10 a.m.

The last time Travis AFB had to evacuate was back in 2008 after there was a fire at the in-base housing. While the 2018 Nelson Fires also came relatively close, it did not prompt a full evacuation of the base.

Cal Fire’s latest numbers on the wildfire were released on Friday morning, showing that the flames have continued to spread – but, for the first time, firefighters are reporting some containment.

READ  Doug Ford handles the restructuring of the main cabinet

Some 30,000 structures remain threatened in the fire, which is spread across five counties.

Authorities have recorded at least four civilian deaths in the fire. It’s unclear if the death of a PG&E worker, who was found near Vacaville after helping first responders clear infrastructure, is part of that number.

Read the previous day’s updates below:

Cal Fire says four people — three in Napa County and one in Solano County — have died in the LNU Lightning Complex Fire.

The fire is now 215,000 acres and 0% contained. There have also been four civilian injuries reported.

Cal Fire says the fires, which are impacting five counties, have destroyed 480 structures and damaged 125. Approximately 30,500 structures are still threatened.

Vacaville police say evacuation orders for the city have been lifted with the exception of South of Foothill Dr. and west of Alamo Dr. from Monte Vista Avenue to I-80.

This area will remain under evacuation as the Vacaville Fire Department continues to evaluate the status of the terrain. Please also refer to the map (https://t.co/sTRlzWOtig)

The body of a man was discovered as crews did damage assessment on Thursday, the Solano County Sheriff’s Office announced.

Authorities said 30,000 people are still evacuated from the area.

Some evacuation orders are now being lifted in Vacaville, authorities say.

Residents in the following areas can now go home:

-East side of N. Alamo from Monte Vista Avenue north to Fruitvale Road and N. Orchard.

People are advised to use this map for exact address information:

Please also refer to the map https://t.co/sTRlzWOtig for exact address information. We know you are eager to return to your homes and we thank you for your patience.

All evacuation orders within Fairfield city limits have now been lifted.

Fairfield officials announced early Thursday afternoon that the remaining order to evacuate the Rancho Solano section around the club house is now over.

This means that all Fairfield residents are now clear to come home.

Still, residents are being advised that fire personnel will still be working behind some homes in the Fairfield. Some smoke may still be seen, authorities say, but first responders are urging residents to avoid calling 911 unless there’s an emergency present to avoid clogging the lines.

Some road closures are still in effect in Fairfield, however. Lyon Road at Hilborn Road, heading north out of city limits, is closed due to downed power lines.

Vacaville authorities say they expect to be able to lift some evacuation orders in the city by 3 p.m. Thursday.

Fire officials are currently finalizing changes to the orders, officials said. They will be looking at and analyzing the current conditions to make their decisions.

Exactly which areas will have their orders lifted is unclear at this point.

There has been some confusion in Vacaville about evacuations. If you live in Vacaville and want to know if your home is under a mandatory evacuation order, do the following:

Evacuation orders are being lifted for all evacuated residences in the city limits of Fairfield EXCEPT the neighborhood around the Rancho Solano Club House shown below. There is still a high safety concern due to flare-ups and weather conditions.

The sheriff’s office says residents of unincorporated areas in Solano County evacuated due to the fire should not return yet.

With downed power lines still in many areas and no utilities available, as well as the LNU Lightning Complex Fire still at 0 percent containment, authorities warn that the situation remains unsettled.

The sheriff’s office is having several teams going out doing property and damage assessments throughout Thursday.

An update on the re-population of evacuated areas is expected no later than 9 a.m. Friday.

The fire has now burned 131,000 acres as of Thursday morning and is 0 percent contained, Cal Fire says. The number of structures destroyed, 105, and damaged, 70, remains unchanged from Wednesday night.

Air quality in the Vacaville area has fallen to Very Unhealthy levels, authorities say. The AQI is at 285, officials say, meaning that people with respiratory or heart disease, the elderly, and children are most at-risk for complications. Those groups should stay inside as much as possible.

Evacuation orders remain in effect on Thursday morning in many neighborhoods in Vacaville.

Parts of homes destroyed. Small fires still smoldering. Black grass covers much of this neighborhood north of Vacaville. A really sad sight to see through all the smoke. @CBSSacramento pic.twitter.com/Guoq3C36AS

Firefighters are continuing to deal with hot spots, but authorities note there seems to be fewer reports of intense fire activity this morning.

Some evacuation orders have been lifted in Fairfield. Residents of Peabody Road, Cement Hill Road and Vanden Road can return, Fairfield police say. Residents who do return will need to provide some identification as a safeguard against any possible looters.

Get the app: Download the CBS Sacramento News app for iOS and Android

Other neighborhoods previously told on Wednesday remain under orders to evacuate, police say.

No update on containment numbers has yet been given Thursday morning by Cal Fire. As of last night, the LNU Lightning Complex Fire had burned a total of 124,100 acres across five counties.

Evacuation orders for areas south of I-80, including Alamo Dr. south of I-80 to Marna Drive, California Drive and Peabody Road have been lifted.

All lanes of Interstate 80 at Air Base Parkway have reopened in Fairfield. Traffic was shut down earlier Wednesday due to the fire.

In Vacaville, police say traffic has reopened on Peabody Road in both directions.

READ  Fiscal scrutiny, back again-to-operate reward among the Conservative demands in advance of fiscal snapshot

Cal Fire reported the LNU Lightning Complex Fire at being 124,100 acres in size and 0% containment. Four civilians were injured and 105 structures were destroyed with 70 more damaged.

Mandatory evacuations have been ordered for all non-essential personnel on Travis Air Force Base due to the fire. All non-mission essential personnel in Travis AFB housing or lodging were ordered to evacuate immediately through the South and North Gates, not the Main Gate or Hospital Gates.

Evacuations have been ordered in Solano County, northwest Vacaville and the outskirts of Fairfield on Wednesday after the so-called LNU Lightning Complex Fire exploded in size.

Starting around 4:30 p.m., traffic on the eastbound lanes of Interstate 80 stopped due to the fire. Many exits are blocked off and flames can be seen from the road.

According to Vacaville police, the fire jumped the freeway to the south around 4:30 p.m. This prompted new evacuations for the areas south of Alamo Dr. from I-80 to the Putah Creek Canal.

Per the Vacaville Fire Protection District and the Solano County Sheriff’s Office, the fire has prompted evacuations for the following areas:

Several areas near Fairfield were also ordered to evacuate early Wednesday afternoon. The areas under evacuation orders in this area are:

A rough map of the areas under evacuation orders has been released by the Solano County Office of Emergency Services:

Evacuation Centers are available at:

Vacaville police say no structures have burned within city limits for the moment, but there are reports of homes burned in Solano County.

Officers had to go door-to-door in Vacaville early on Wednesday to warn residents to evacuate.

Evacuation centers have been opened at Will C. Wood High School, the McBride Center, the Ulatis Cultural Center and the Vacaville Skate Center.

All Solano County schools have canceled distance learning for the remainder of the week. That includes Fairfield-Suisun USD, Travis USD, Vacaville USD, and Solano County Office of Education-operated programs in the districts.

Get the app: Download the CBS Sacramento News app for iOS and Android

Firefighters across the state are battling dozens of wildfires amid a heatwave.

At least seven fires are being grouped together as one in the LNU Lightning Complex Fire. Firefighters have warned of “extreme fire behavior” from the fire, noting that the rural areas with steep terrain have made it difficult for crews to get in.

The fire is also burning in neighboring Napa County near Lake Berryessa.

As of Wednesday morning, the LNU Complex Fire was a total of 46,225 acres – equal to about 72 square miles. This would make the fire larger than the cities of Stockton (at 65.26 square miles) and Modesto (44.8 square miles).

Reporting from the Associated Press contributed to this article.